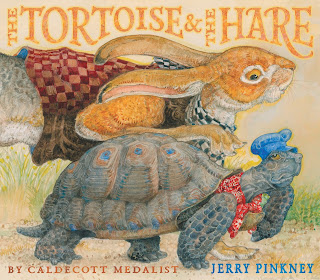 Illustrated by the 1956 Caldecott Medal winner, Feodor Rojankovsky, The Book of Nursery Tales, introduced me to fairy tale and fable favorites.  The lesson taken from the race of mismatched opponents has served me well again and again over the years.  Jerry Pinkney's latest release, The Tortoise & The Hare (Little, Brown and Company) is a gorgeous retelling of a cherished tale, a companion to his Caldecott Medal winner, The Mouse & The Lion.


Every single time I hold a book with illustrations by Jerry Pinkney, its like I have an incomparable treasure in my possession.  A heavy matte-finished jacket with a double-page illustration edge to edge introduces the two main characters, front and center, and several smaller supporting members of the cast on the back.  Set in the American Southwest, the color palette reflects the warm and sunny, dry and dusty surroundings.  Beneath the jacket, the cover is wordless, in two frames a close-up of the Tortoise and the Hare facing one another appears on the front.  On the back in a single, framed picture, the duo are walking away side by side.

Opening endpapers feature a desert vista, filled with rocky formations and flora native to the region; a barn, silo, windmill and garden are tucked in the upper left-hand corner.  Dotted lines show the route the racers will soon follow.  Tortoise is resting on a stump, head tucked into his shell, as hare hops hurriedly down the trail toward him.

The first page turn reveals another two page visual dedicated to the title as well as beginning the story.  Animals are running toward Hare and Tortoise as the two converse.  Another group off to the side are chatting excitedly.

Hare's walking stick and black and white checked kerchief given to Coyote, to use as a visual starter, has dropped as the verbal signal is given.   Hare leaps away down the route.  Tortoise negotiates the path at a much slower pace; mice, bees, a grasshopper, moths, a bird and lizard offering advice and encouragement.

Startled frogs scurry and splash as Hare hops unannounced over their watery residence.  They gleefully guide and ride Tortoise as he swims through the pond.  So far ahead he has lost sight of Tortoise, Hare can't help but notice and slow for a lush garden full of lettuce.

Digging, eating and sleeping are the next order of business for Hare.  Tortoise, on the other hand, tumbles, plods and passes.  The race ends as it has for centuries but Pinkney enhances the outcome with his personal perspective; much can be learned from both sides of a story.


Jerry Pinkney uses the text of the closing line,

Slow and steady wins the race!

to add energy and tension to his retelling.  As we readers watch Tortoise picture by picture move along, the first word is added.  In the next visual the first two words are included.  Each time, a new word is added until the thought is complete.  In your reader's mind it makes a rhythmic beat, building to the finish.  Other than the opening lines these are the only words used in the narrative.

In an Artist's Note at the book's end, Jerry Pinkney explains his choice of setting, color palette, ending and reason for clothing his characters.  Rendered in graphite, watercolor, colored pencils, gouache and pastel, these illustrations pulse with life.  A very real sense of emotion and personality traits of all the characters is conveyed with affection.

Readers are treated to colorful, animated double page illustrations or smaller framed panels with some elements leaving the confines of the lines to represent life and movement.  The choice of clothing for each of the animals is sure to evoke smiles among all readers.  I believe my favorite illustration is of Tortoise emerging from the stream, one frog perched upon his back, another still in the water, arms upraised and a third leading the way laughing and leaping.


Jerry Pinkney's The Tortoise & The Hare, is a brilliant and masterfully artistic interpretation of a well-known fable.  I, for one, am thrilled with his illustrating of classic fables, nursery rhymes and fairy tales.  His valued perspectives contribute more than can be measured to the world of children's literature.  I believe every collection should include these titles.

Make sure to visit Jerry Pinkney's website by following the link embedded in his name.  PW KidsCast: A Conversation with Jerry Pinkney is an audio interview in which he discusses this latest book.  The widget below allows you to see pictures from inside the book.  Enjoy Jerry Pinkney talking about his work in the video below.