Knowing real life does not always end happily ever after, makes looking for a silver lining all the more important.  It also makes those moments when everything seems perfectly in place all the sweeter.  A single decision can tip the scales. 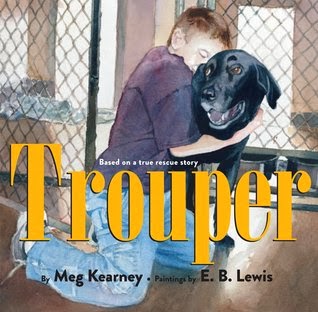 So many depend, so much depends, on the myriad decisions each of us makes on a daily basis.  With the pet population in shelters ever growing, a choice to adopt may mean the difference between life or death for one of the temporary residents.  Using events from her own life, author Meg Kearney has created Trouper (Scholastic Press) with illustrations by Caldecott Honor Book winner, E. B. Lewis.

Back in the before time,
before I licked your nose
or sniffed your shoes,
before you bought my bed and bowl,
before the place you picked me out,
I ran with a mob of mutts.

Though free to roam, survival is hard for a group of dogs, living on the streets, scrounging for food in the garbage left by humans, and evading the rocks thrown by boys.  When offered the choice of eating steak, they readily enter the back of a stranger's truck.  Taken to a place with dogs, cages and dogs in cages, this canine company is separated.  Eight plus one now receiving food and water are no longer running at will.

Day after day people walk along the row of cages.  One by one the number nine drops until only one remains, Trouper.  No one wants a dog with three legs.

Someone sees beyond the three legs.  Someone sees the kind soul shining through those big eyes.  Someone wants this last dog.  It's a boy.  A boy whose compassion far exceeds the meanness of those others.

In 2005 Trooper (his given name) was moved from a shelter in Puerto Rico to live in New Hampshire with author, poet, Meg Kearney.  Written in verse, narrated by Trouper, she imagines how life might have been for this dog; waiting for the right person to notice him.  His voice describes each incident in accurate canine awareness.  Here is another example.

We got water and kibble
from the lady who cared for us.
We got walks,
but wished
we could race
the way we used to.

Everything about the front jacket and cover beckons the reader to open this book.  You don't know what the circumstances are yet, but it's easy to see the boy is with a forever friend.  Rendered in watercolor, the artwork of E.B. Lewis is nearly photographic in capturing the essence of the subjects; each is rich with emotion.

Nearly all of the illustrations span two pages.  The smaller vignettes and single page pictures convey loss of freedom, sadness, hopelessness, individual dog personalities, and love.  Lewis' dogs are so lifelike you expect them to start barking any minute.  My favorite illustration is of Trouper enjoying his first meal in his new home, bowls on mats, with his boy kneeling, chin resting in his hands as he watches his new pal.  The play of sunlight streaming into the room, the angle used to portray the two friends, the placement of other items in the room, all combine to create a feeling of intimacy.

Trouper written by Meg Kearney with paintings by E.B. Lewis is a very special book; a labor of love about love.  The blend of narrative and illustrations compliment and enhance one another to tell a story of a bond formed by an act of kindness.  It's about the magic of second chances.  This title is meant to be shared often.