For those who pursue a passion of inquiry into the age of dinosaurs, there can never be too many books on the topic.  Every new volume is treated like a much-desired gift.  You never know what exciting bit of information will act as a missing piece to be placed in the puzzle for these prehistoric creatures. 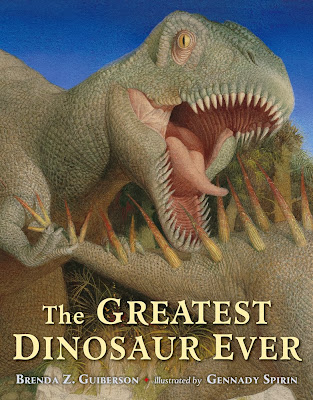 Discoveries by paleontologists continue to expand the knowledge base.  Four years ago in the state of Utah, a new dinosaur, Lythronax argestes, was found, confirming dinosaurs of the giant variety were around millions of years before the Tyrannosaurus Rex.  After four years, the fossil went on display November 6, 2013 at the Natural History Museum of Utah. The masterful team, author Brenda Z. Guiberson and illustrator Gennady Spirin, which earlier this year released Frog Song (Henry Holt and Company, February 2013) have collaborated in a new title, The Greatest Dinosaur Ever (Henry Holt and Company, October 2013).

Who was the greatest dinosaur that ever lived?
I was the greatest. I was the tallest and the biggest herbivore. I had a long neck with the highest reach into the trees. The earth shook when I walked.

Sauroposeidon does indeed fit this description but eleven other dinosaurs have their say in the pages that follow.  Each enumerates their unique features, certain they were the greatest dinosaur of all!  Readers will marvel at the special qualities of each, those adapting them to their habitats and pursuit of food.

Which dinosaur was the longest?  Which could swallow five hundred pounds of food?  Which had three-foot-long claws?  Was it Tyrannosaurus Rex, Spinosaurus or Therizinosaurus?

Seventeen diamond-shaped plates ran along the back of one with a tall having the longest spikes.  Another had armor covering its entire body, including its eyelids.  Hollow bones contributed to a third's phenomenal speed, over forty miles per hour.


Will it be brain size, night vision, flying, parenting or the smallest which will snag the prize as the greatest dinosaur of all?  Decisions, decisions...you are asked to choose.  If you lived then and there, what would you value the most?


The narrative format used by Brenda Z. Guiberson will have readers feeling like participants at a round table discussion, each dinosaur giving voice to their outstanding physical attributes.  Repetition of beginning and ending statements for each entry, provide a rhythm, a flow.  Beneath each dinosaur's name a pronunciation guide is shown.


Elaborate oil paintings by Gennady Spirin  extend edge to edge throughout the book beginning with the jacket and cover.  Tyrannosaurus Rex roaring as it moves in for a meal on the jacket is accompanied by Spinosaurus on the cover, rows of sharp teeth lining its open mouth.  The title page and two narrative closing pages feature large eggs, the first with necks, heads and feet of different dinosaurs emerging from cracks and the latter, a backdrop for text surrounded by a variety of dinosaurs.

Each dinosaur is colorfully portrayed in a stunning landscape, a misty quality associated with a warmer, humid climate permeating all the pages.  All twelve are in motion, sometimes only one will be showcased, other times there will be a group.  With little stretch of the imagination, these illustrations come to life with all the sights and sounds of the age.  My favorite is of the Spinosaurus, standing on a cliff above a large body of water, trees framing each side, dinosaurs in flight, near and far.

Whether you are one of the legions of dinosaur devotees or merely curious, The Greatest Dinosaur Ever written by Brenda Z. Guiberson with illustrations by Gennady Spirin is a book to be read over and over; the text and illustrations enticing your return. Two pages at the back contain thumbnail pictures of each dinosaur giving the meaning of their name, the pronunciation again, their size, the period in which they lived and their location. On the final page an author's note, bibliography and online resources are supplied.

Please follow the links embedded in the author's and illustrator's names to access their websites.  If you wish to see more pages from this title go to the publisher's website linked here. This is a link to a printable PDF file activity guide.  This title could be paired with How Big Were Dinosaurs? by Lita Judge and Alphasaurs and other prehistoric types by Sharon Werner and Sarah Forss.
Posted by Xena's Mom at 1:44 PM