Back From The Edge

Now our lawns and gardens are covered in snow it's easy to see who shares the surrounding fields and woods with us.  Deer paths cross in a straight diagonal from one tree-sheltered field to another.  Rabbits zigzag and loop about with no clear pattern except to merry-go-round bushes, nibbling on green shoots still visible. 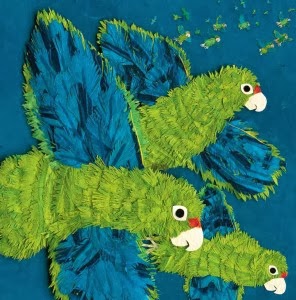 I can't imagine seeing snow untouched by the prints of these creatures of forest and field.  Much like me seeing these images in the snow, people living in Puerto Rico for centuries would catch glimpses of the bright blue flight feathers of the Puerto Rican parrots that inhabited the island long before people arrived.  Parrots Over Puerto Rico (Lee & Low Books, Inc., September 15, 2013) by Susan L. Roth and Cindy Trumbore with collages by Susan L. Roth tells the tale of these magnificent birds who nearly faded from existence.

Above the treetops of Puerto Rico flies a flock of parrots as green as their island home.

Beginning with a time on the island prior to human habitation, we learn of the parrots call,

and the other present flora and fauna.  Between 5000 BCE and 800 BCE people arrived from South and Central America, planting their crops, hunting the parrots for food and capturing them as pets.  The parrots numbered in the hundreds of thousands on Puerto Rico and the nearby smaller islands. It must have been a thing of beauty to see them in such great numbers.

Tropical storms destroyed the parrots nesting trees but others could be found.  In 1493 the Spanish arrived creating even more buildings and clearing land for planting.  As the parrots searched for mates each year, the dynamics of the people on the island were changing; Africans were brought to Puerto Rico as slaves and there were more arrivals of people from Spain.  The people sought to establish families, too.

As the human history unfolded so too did that of the Puerto Rican parrots; when their enemies, the red-tailed hawks attacked, other countries tried to take Puerto Rico from the Spanish.  Parallels follow through the years.  Non-native animals and insects invaded the parrots' nesting sites, the United States invaded the island making it officially a territory in 1917.

Page turn by page turn as the human population flourished, the parrot population diminished.  By the early 1950s there were only two hundred parrots counted.  By 1967 the Puerto Ricans finally noticed the parrots' absence; only twenty-four birds remained in El Yunque.

Since that time determined, dedicated, heroic efforts of the United States working hand-in-hand with Puerto Rico through a special project, Puerto Rican Parrot Recovery Program, have endeavored to assist all parrots, those in the wild and captivity.  Placement of artificial nests, creation of sanctuaries, aviaries, and special training sessions have helped little by little.  The results, not without their share of setbacks, are nothing short of miraculous.


The thorough and meticulous research of Susan L. Roth and Cindy Trumbore is unmistakable from the first page.  Their technique of presenting information, a paragraph about the parrots followed by a paragraph about the island and its human inhabitants, creates a type of comparative tension.  In this way readers are able to clearly see how the later affected the former.  Choosing to provide this material in chronological order further enhances the emotional involvement of the reader.  We can't turn the pages fast enough to discover the fate of these resplendent birds.


The first thing you notice about the matching jacket and cover is the colors and texture. The vibrant hues of green and blue with small touches of red, black and creamy white rendered with collages of paper and fabric by the hand of Susan L. Roth are simply stunning.  The next noteworthy detail is the tiny Puerto Rican parrot on the back holding the ISBN in his claws.  There is no other text on the jacket and cover, no title, no author or illustrator names except for along the spine.  By now you might be wondering about the placement of the parrots on the front cover with respect to the spine and book edges.

Upon opening the cover it's clear this book will read differently than most.  Both the opening and closing endpapers display a flock of small parrots in flight.  The opening endpapers are the dedication page; the closing endpapers contain all the publication information.  The surprise is this is exhibited vertically as is the entire book.

A true marvel of design and layout each two page spread heightens the text, found at the page bottom, with an intricate portrayal of the island, the parrots and their interactions with those responsible for their near extinction and friends who are still trying to save them.  These works of art reveal new details at every viewing.  It is nearly impossible to select a favorite but I believe the two pages showing the large number of parrots against the turquoise sky with the island and water beneath them before the arrival of humans shows the grace of these creatures the way they truly are; it provides a goal and glimmers of hope.


Four starred reviews, Booklist, Kirkus, Publishers Weekly and School Library Journal, certainly place Parrots Over Puerto Rico by Susan L. Roth and Cindy Trumbore in the center of several circles of discussion for possible awards.  As the best of nonfiction picture books do, they give readers the story in a distinct, easy to understand, narrative format with dazzling illustrations.  Without books such as this how are we to discover these important subjects?  If you have not finalized your Mock Caldecott yet, I urge you to consider this title.  It's outstanding in every respect.

Six pages at the book's end contain more factual and pictorial items of interest as well as a bibliographic list of sources.  To acquire more information about the authors and illustrator please follow the links embedded in their names.  This link takes you to a recent post at Seven Impossible Things Before Breakfast where Julie Danielson includes several pages (my favorite) for your viewing enjoyment.