With A Single Step

Never having been a believer in coincidences when this tweet appeared in my feed I knew there was only one thing to do.


It was time to review a book I read before going to sleep several weeks ago.  When I finished this book, I simply held it in my arms.  I've had a couple books this year I've hugged after reading them; their stories were so endearing but this book I held was different.  It was filled with possibilities.  I did not want any of them to escape.

For my older dog, several times a day her journey is to struggle to her feet, slowly move about the house, walk to the door, around the yard and, on good days, maybe a block down the street.  One evening this week two rabbits were playing a hopping game of tag in my front yard.  Their particular playful journey was spontaneous, the stuff of fairy.  Every night just before it gets too dark to see, a neighbor walks around the subdivision two or three times, trying to rehabilitate a knee after surgery, making a journey toward better health.  A fallen leaf, a stone upon a sandy beach or a penny dropped from a pocket are all on a journey.

Perhaps one of the best journeys of all is the one taking you to a library.  Within those walls are an infinite number of journeys; combinations of books and readers.  To open Journey  (Candlewick Press, August 6, 2013), a wordless picture book, written and illustrated by Aaron Becker is to step on a path of power, the power of imagination. 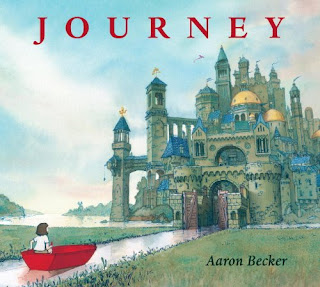 Unfolding the jacket of Journey we see on our left a rich red flowing to the spine.  The only other color is three decorative, ornate lanterns in shades of blue hanging from the top, three moths flying about those lanterns.  As our eyes drift right, to the front, the same red is used in three elements, contrasting with a castle straight out of a dream.  The black cloth cover is bare except for an embossed hot air balloon carrying a single passenger.

Opening and closing endpapers in a subdued shade of the red are patterned in adventurous modes of travel; hot air balloon, train, motor car, Viking ship, three-masted schooner, air ship, airplane, submarine and maybe even a space vehicle.  They are a blend of history and fantasy.  On the title page our traveler moves down the city street on her bright red scooter beneath tree branches, a blue lantern hanging down, a blend of the here and now with a hint of the magic to come.

We follow her as she sits on the steps of her house, head and hands resting on her knees.  A cutaway of the rooms in her home show her mother cooking in the kitchen, her father at work upstairs in his study in front of a computer and her sister lying on the couch watching a digital device.  Three smaller illustrations picture her asking each to go outside with her riding on the scooter, flying a kite or playing with a ball.

Then alone except for the company of her cat, she sits on the bed in her room.  When the cat leaves she spies a red marker on the floor.  Drawing a door on the wall, she is able to open it and step from a tree trunk into the lush greenness of a forest strung with lights and those same hanging blue lanterns.  Using the stream meandering through as a map, she walks to the end of a dock.

A small rowboat drifts along with the current into a castle with turrets, waterfalls and raised waterways, taking readers along with the girl into the realm of Pallonezia.  A hot air balloon floats among the clouds and airships. A rarity is captured and rescued.  The favor is returned.  Flight on a carpet takes her back through another doorway to the streets of her city. A friend awaits...a friend careful readers will have noticed in the very beginning.


Rendered in watercolor, pen and ink the illustrations of Aaron Becker create a luminous landscape unlike any other.  Sepia tones are used to delineate the girl's world except for the bright splashes of red, in stunning contrast to the world encountered on the other side of the doorway; spectacular in color, detail and viewpoint.  He also chooses to shift from full color edge to edge illustrations to those placed upon a white background to place emphasis on the importance of the circumstances as when the girl draws.

From a bird's eye panoramic view, moving in closer and closer, until a scene unfolds as if we are the girl, these illustrations request us to be part of the storytelling.  Details from the city appear again as fixtures in the other world.  How many can you find?  Each of the illustrations are integral parts of a beautiful whole.  With that being said, my favorite may be when she enters the forest through the red doorway, you know, beyond the shadow of a doubt, something very special is about to begin.


Journey written and illustrated by Aaron Becker is one of those books, where from time to time, you need to stop and remind yourself to breathe.  Like so much in life, even the end hints at the beginning of yet another journey.  I will gladly be placing this title with others on my Mock Caldecott list.