Have No Fear, Alligator Is Here

Year after year I've stood outside the school watching the buses arrive on the first day of school, outside the library doors in the hallway or inside the library on open house night as parents and their sons and daughters arrive excited, anxious and for new students, wondering and wide-eyed.  No matter what they have read or been told, the experience is a change.  It's the not knowing, the never-been-here-before and never-done-this-before feeling, which can be overwhelming. 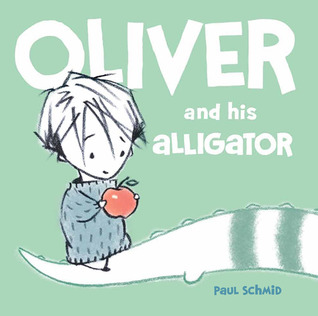 Each person, no matter their age, has a method in place for dealing with stress.  Quite frankly, children have the best idea of all---carrying their favorite toy with them, a friend that never fails.  The first day of school ever, starting kindergarten, is shown to be less intimidating in Oliver and his Alligator (Disney Hyperion Books) written and illustrated by Paul Schmid.  Oliver's alligator is different, very special and...agreeably hungry.

Oliver sometimes felt his brave
wasn't nearly as big
as he needed it to be.

He decides to pick up an alligator at the swamp on his way to school for the first day.  As soon as Oliver arrives at his classroom door, the fear grows.  His mom isn't there for starters.  She has been replaced by a unknown woman who wants to know his name.  A name which escapes him at the moment.

All he can think to say is "Munch, munch!"  These two words turn out to be a code communication between him and his reptile pal.  The stranger disappears into the stomach of the alligator.  Walking into the classroom is clear now but there are new children in the room.

One, a little girl, has the misfortune to approach Oliver asking him about his favorite animal.  Overcome by shyness the only two words he can utter are..."Munch, munch!"  The belly of the gator is getting noticeably bigger.  Maybe school isn't going to be so bad after all when you've got a buddy like Oliver has.

There were more boys and girls.  Alligator is getting huge.  There are inviting educational patterns and designs on the walls.  Alligator is now ginormous.  Ah, yes...that's more to Oliver's liking, peaceful and quiet and...wait...could it be...boring?

There's a sound.  Oliver wants to be a part of the sound.  There's only one thing for Oliver to do and he does it.


The simplicity of the text, the ease in which it flows, all contribute to the appeal of this title.  Paul Schmid writes specifically for his intended audience, knowing the heart of a child on the first, very first, day of school.  In using two, single syllable words repeatedly to alleviate any problem Oliver encounters, readers can feel, like Oliver, the same sense of relief and finally a sense of belonging.

Using pastel pencil and digital color Paul Schmid creates pages where readers can be comfortable stepping into Oliver's world.  On the book's jacket the cool, soft minty green, the textured dusty blue of Oliver's sweater, the rosy red of the apple in his hands appear again on the jacket's spine.  On the front we see only the tail and the back portion of the alligator's body.  His nose and the rest of his body are on the back of the jacket looking at Oliver. When you remove the jacket the cover unfolded is all white except for three stripes of green (including the spine).  An upright alligator is on the front.

The opening and closing endpapers, in lavender with a partial circle of lighter turquoise in the lower right and left corners, respectively, are actually part of the story, as is the dedication page (For Maurice) with Oliver forlornly staring into his cereal bowl, an apple sitting on the table.  The lines used to create Oliver are soft, delicate, sketch-like; making him all the more endearing.  The same holds true for his alligator.  Readers will want to hug them both.

Throughout the book Schmid alters his layout and perspective making liberal use of white space, along with a gray, the turquoise, the alligator green, the lavender, the rosy red, introducing a lime green and spots of pale yellow.  Every time Oliver speaks the "Munch, munch!" words with the girth of his alligator expanding, Schmid's portrayal of the loyal companion gets funnier and funnier.  The paper stock coupled with the medium and artistic techniques make the reading of this book a very tactile experience.  My two favorite illustrations are of Oliver resting on his alligator's stomach after the teacher and little girl have been consumed and the alligator alone spread across the gutter after Oliver wonders if all the students can fit inside his friend, They could.


Oliver and his Alligator written and illustrated by Paul Schmid is one of those books you wish you could give a copy to every new student entering your building.  It speaks directly to those fears, apprehensions, children have.  Paul Schmid is attentive to children's feelings and he knows how to make everything okay.

It would be interesting to read this title to any age, asking them to write or draw what they would bring to school on the first day (or another time they might be frightened) to give them comfort.  I think it might be a good idea to have the first day of school be Bring Your Stuffed Animal Day.  There are days I wish I still had my sock monkey.

Please follow the link embedded in Paul Schmid's name above to access his website.  Follow this link to an interview at Seven Impossible Things Before Breakfast.  There's lots of artwork.
Posted by Xena's Mom at 6:55 PM