Which One Is Which?

I have a deep and abiding respect for any animal in the wild, being keenly aware of the precarious place in which many find themselves with the diminishing areas left for them to live on our planet.  Although I long to see some in their own habitat, free from the encroachment of human population, I wish to do so from afar.  I've been told crossings are being made from the Upper Peninsula of Michigan to the Lower Peninsula when the lakes freeze over in the winter. 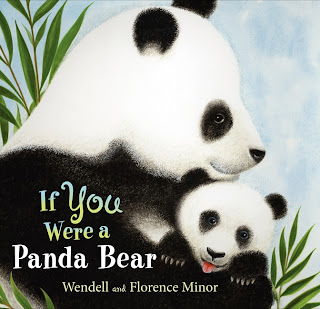 Wolves, cougars and black bears have been sighted in the tip of the Mitt but not by me.  A black bear decided to take a stroll within our city limits several years ago.  Fortunately there are authors and illustrators who are dedicated to informing readers of those animals unlikely to be observed by most.  If You Were a Panda Bear (Katherine Tegen Books, an imprint of HarperCollinsPublishers) by Wendell and Florence Minor takes us on a trip around the globe so we can met eight members of the bear family.

If you were a panda bear,
Guess what you would wear?

Pandas don a coat patterned like no other and enjoy snoozing when not eating a bunch of bamboo.  Their timid nature is something young readers will understand.  I wonder why the sloth bear has those long claws?  Why is their hair so long?

Blending with the color of snow, a polar bear peeks through a hole in the ice.  Perhaps a next meal will be spotted.  You know it's true but sometimes you forget to look up, up in a tree for a black bear.

It's a sliver, a sliver of the moon, that's printed on the moon bear's furry chest.  His brother the sun bear is smaller.  To get his sweet treat, his tongue is different than most.

Salmon is a tasty meal but I don't think I want to ask a ten foot grizzly bear to share.  Meeting a new friend within the pages of a book is the best.  I wouldn't feel shy about wearing my glasses around a spectacled bear.  There is one bear, of course, the most well-known and treasured of all.  Can you guess what it's called?


Geared toward younger readers but equally enjoyable for any age, Florence Minor writes a series of four-line poems about each of these bears.  Woven into the cheerful, rhyming verses are facts about physical characteristics, diet and habits.  Beginning each with the words, If you were a... , encourages reader involvement; after the first couple of poems listeners will be adding their voice to the opening line.  The rhythm created by these poetic introductions invites repeated readings. (I've read it at least four times already.)


The realistic, spectacular paintings of Wendell Minor begin on the matching jacket and cover.  Walking in a row showing the difference in shape, color and size are four of the bears beneath the initial title page.  (All are shown in this manner across the final two pages, Bear Fun Facts.)  Beneath the title on the following two pages, all eight bears are facing forward, lively and intent, mainly their heads and upper bodies.

Throughout the body of the book, double page spreads are dedicated to the bears; sometimes two sets.  The texture, the softened quality, of each painting is remarkable.  Minor's dedication to showing his subjects in their natural setting adds to the authenticity of his artwork.  Readers will believe at any moment, the bears could come to life.  One of my favorites is the close-up of the sun bear, tongue extended licking the honey, bees swarming about, one enlarged bee coming straight toward the reader.

If You Were a Panda Bear by Wendell and Florence Minor is a lively first look at bears known and unknown.  While facts are included in the poems and at the book's end, this is the type of nonfiction book which promotes further investigation.  I can see posting a world map and locating the natural residence of the bears; perhaps by making a Popplet.  As more information is discovered students could write their own four line poems to include what they've found.  Bear Sources and Websites, a short bibliography, is the final page in the book.  I highly recommend this title.

The New England Independent Booksellers Association recently named Wendell and Florence Minor the recipients of the President's Award for a lifetime achievement in arts and letters.


Please follow the link embedded in Wendell Minor's name above to access the couple's website. There you can view more pages from this title.  This link is to the publisher website.  They offer inside views of the book and a simple activity sheet.  Enjoy the book trailer.