On my first airplane ride I sat in the co-pilot's seat.  The pilot was my best friend.  We were sixteen years old.  It was rare for a girl at that age to get her pilot's license.

Built by her father and a friend, the small yellow airplane was kept at a tiny airport, with a runway more like a grassy field, in a neighboring community, Mason, Michigan.  We had to move the propeller to get the engine going but when we were airborne it was heavenly. 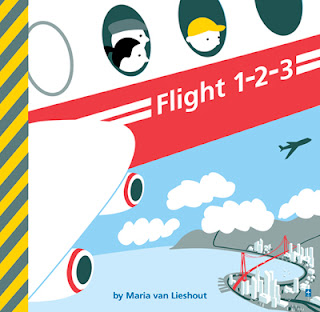 Flying over our hometown, close to our houses, like birds we soared.  Even today I can still recall the elation felt during those flights.  Flight 1-2-3 (Chronicle Books, March 12, 2013) written and illustrated by Maria van Lieshout captures the same magic in the exploring of an airport, the deciphering of the signage, counting what can be seen and traveling by plane.  It is a companion to her Backseat A-B-See (Chronicle Books, April 11, 2012).

When taking a flight, what do you see?

Before even entering the terminal we observe an image on a blue and white sign that even the youngest child can identify, an airplane.  Does this mean we are going to see a plane?  It does, but it is best known for meaning airport.

Along with a boy traveling with his parents, inside the airport it's not hard to imagine a child finding the luggage carts fascinating.  After stopping at the check-in desks it's time to move up or down to locate the departure gate.  Stepping off any one of the elevators or escalators perhaps used items need to be thrown away.  Let's see if we can find a row of trash cans.

Those security officers are making sure everything we carry on the plane is safe.  Sometimes it seems within minutes of a main meal, hunger strikes.  Oh, look!  There is the area for foods and drinks.

I need to use the restroom now.  The line for women has more people in it than the line for the men. Looking out the tower window you can see ten gates with airplanes waiting.  We, all 100, are seated now; everyone has read the fastened seat belts sign.


We lift up into the air at heights among the clouds traveling thousands of miles.  Are we there yet?  We are?  They are waiting for us.  It's a meeting with those we love.  Don't forget anything.  It would end up in the lost and found.


This is one of those books where the tactile experience is perfect for a younger audience (and those of us reading to them too.) The use of the limited color scheme of yellow, gray, several shades of blue, white, red and black allows for the focus to remain on the places represented by the signs.  Using two pages for each of her digitally created illustrations, Maria van Lieshout has created a flow, much like a journey from one point to another, through her layout and design.

Beginning on the opening endpapers with a two-tone gray image of a cityscape, she informs readers in a short introduction about the importance of signs and those responsible for the symbols we see today.  The title page shows a taxi carrying a family to their destination, the boy pointing toward a plane in the sky.  The only text is the title, the author/illustrator name, publisher and place.  It's interesting that the home of Chronicle Books listed, San Francisco, is the family's starting point; the Golden Gate Bridge a symbol itself.

The few words, the numbers, the shapes of the people and all the elements, contribute to the simplicity and clarity of the overall book.  Nevertheless, attentive readers will note, for example, on the pages for check-in desks, the status signs.  These two pages are for the number three.  The three signs read:

On the page for five, trash cans, each can contains five items.  Maria van Lieshout is consistent in her attention to details, knowing her audience, knowing they will be looking for the patterns.  The closing endpapers feature the larger family headed away from the airport toward a new adventure.


Flight 1-2-3 by Maria van Lieshout was showcased in a Trifecta at Watch. Connect. Read., sharpread and the Nerdy Book Club with an article written by the author.  Head on over to The Horn Book for Five questions for Maria van Lieshout about this book.  Follow the link attached to Maria van Lieshout's name above to access her website.  Get ready for take-off because Flight 1-2-3 is heading to parts far and wide destined to be held in many hands and read over and over.  Please note that a bibliography and index are included.
Posted by Xena's Mom at 4:26 PM