Over the years the circulation of short story collections seems to be a hit-or-miss phenomenon.  Sometimes a particular title is never on the shelf, others sit there unloved until given a blessing by someone who has enjoyed it.  To me short stories are small masterpieces, like picture books, they have less space to convey what the author wants readers to relish, understand or question. 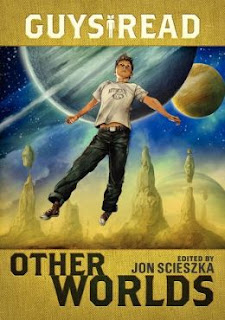 During attendance at the American Library Association Annual Conference & Exhibition in June, I was fortunate to get an ARC of the fourth volume in the set, Guys Read: Other Worlds edited by Jon Scieszka, illustrated by Greg Ruth to be released on September 17, 2013.  These stories by authors, Rick Riordan, Shannon Hale, D. J. MacHale, Tom Angleberger, Neal Shusterman, Rebecca Stead, Shaun Tan, Kenneth Oppel, Eric Nylund and Ray Bradbury (yes) take readers into the realm of science fiction and fantasy.  They are so finely crafted I had to pace myself to read one a day.  I might have finished in one sitting otherwise.

Jon Scieszka states in the introduction:

All fiction and storytelling is answering that "What if..." question.  But science fiction and fantasy go a step further: They bend the rules of reality.

I know what you're going to ask.
"Percy Jackson, why are you hanging from a Times Square billboard without your pants on, about to fall to your death?"

Rick Riordan opens the collection with a brand new story featuring our favorite demigod who ends up in a serious predicament.  You never know what to expect when Apollo crashes your best friend's birthday party with a request.  It seems one of his golden automatons, a celedon, has gone astray; damage control is of the utmost importance.

When I staggered into the town, I hadn't eaten in three days.  My big brother's armor pressed heavy on my shoulders.  His sword hung long from my belt, scraping the ground. I tripped over it, fell face- first into a mud puddle, and wondered, If I just lay here, how long would it take me to die?

Spark has run away from home taking a few of her older brother's belongings.  Three days without decent shelter or food have weakened her to the point she claims to be what she is not; desperately needing the job of a bouncer in a tavern, the Grinning Goat.  Shannon Hale uses this falsehood to reveal a character who cleverly uses past experience to her best advantage surprising everyone, including herself.  Two things change everything, her brother Forge shows up and so do the dreaded Ash Raiders.

Kit was on his own.  That was his first mistake.

You may think you have a pretty good idea what scouting entails especially if you've been a scout.  Kit thought he did too, until his plan to evade the rest of the group on a two day camping trip turns into a life or death struggle.  The mind of D. J. MacHale has spun a tale of twists and turns that will have you watching the sky and wondering.

The great commander is about to speak to his conquering army!
The crowd of ten million soldiers falls silent as he hops to the microphone....Listen....

Of course the commander is a super-duper shoe as are all the soldiers.  Yes, shoes!  They are more like robots than footwear; their designs are so advanced.  According to the man behind this madness, Tom Angleberger, they have had it with humans.  Get ready to burst out laughing.

"Your hands are filthy, your hair is filthy---Tanner, you can't come to school like this, surely you must know that?"
Principal Hammond leaned back in his chair, perhaps hoping to distance himself from the unfortunate aroma of Tanner Burgess's clothes.

Soon enough the state of fourteen-year-old Tanner's cleanliness will be the least of anyone's worries.  He and others, a colony, have been hurtling through space for generations, hoping to populate a new planet.  What the architects of this mission did not reveal to the ship's occupants,  Neal Shusterman does to readers, one suspenseful page at a time.

Dear_______________,
Because whoever is reading this, I have no idea who you are. I haven't even figured out where I'm going to stick this thing when I'm done with it, but it'll be somewhere secret, somewhere hard to find, and it might be a long time before anyone reads it.

Rebecca Stead places the reader squarely in a very tense situation, a letter is being written by a prisoner in his own home. A boy is worried about his parents, they will do anything for him.  Cats, the Mothership and empanadas figure into the solution and...the problem.


When stepping into the fabric of a story woven by the artwork and text of Shaun Tan, readers find themselves surrounded by a distinct oddness.  The familiar is portrayed in unfamiliar circumstances.  On a typical day one might be awakened by a giant cicada, stand alongside the road, mug in hand, waiting for an enlarged coffee pot to walk by to deliver your morning java jolt or use a gigantic pencil (3X your size)to complete your work.


When the train arrives in Meadows, it seems to Luke to be like all the other forlorn places they have stopped along the way.

There are some museums which should be avoided.  Kenneth Oppel's Klack Bros. Museum, located fifteen miles outside of Meadows is one of them.  An attraction kept behind a locked door has become attached to Luke.  It seems this supernatural force has plans of its own.


Commander Kane looked from the bridge of his mighty warship, Colossus.
The central view screen showed a blue planet swirled with clouds.  A world called "Earth." Its defenses would only take a minute to annihilate.

What Commander Kane does not factor into the previous comment is Rule 039 and two boys at recess; two boys who are more geek than athlete.  One team after another descends to Earth to play in the basketball game of all basketball games.  Will strategy over strength rule the day?


During the night, Sim was born.  He lay wailing upon the cold cave stones.  His blood beat through him a thousand pulses each minute.  He grew, steadily.

Imagine a mission gone horribly wrong.  Imagine only being able to live eight, at the most eleven days; physically spending a lifetime in such a short time.  Imagine extreme heat and extreme cold limiting your time outside the caves to a matter of minutes each of those days.  Will this tragic cycle ever end? Ray Bradbury is a master storyteller.


Guys Read: Other Worlds edited by Jon Scieszka is one of the finest short story collections, in any genre, I have ever had the pleasure of reading.  Each story is stunning in its inventiveness, in its ability to reach out and grab the reader's attention quickly and completely.  The tension, humor, action, the sheer adventure of each, is heightened by the skillful use of language, the pointed dialogue between characters and the created worlds we eagerly enter. One story, any story, and your listeners will beg for more.  The artwork of Greg Ruth, beginning each chapter, is a subtle nod to a key portion in each story, even more so in the Tom Angleberger piece.  I think my favorite might be for The Warlords of Recess.  A boy wearing a numbered T-shirt is getting read to shoot a basket, the ball is planet Earth.

Please follow the embedded links to all of the author/illustrator websites.  You will like these stories so much, you will want to read more of their work, if you have not already done so. I have also included a link to Guys Read.  Follow this link to the publisher website to access a Discussion Guide.
Posted by Xena's Mom at 12:41 PM