It would seem that our lives are composed of rituals; certain practices done at specific times of the year, month, or even every day.  During the month of August it might be staying up into the early hours of the morning to watch the Perseid meteor shower, growing up it was new shoes before school started in September, or each night not being able to go to sleep until you've told members of your family good night, I love you.  These routines give comfort, a sense, whether true or not, that all is right with the world. 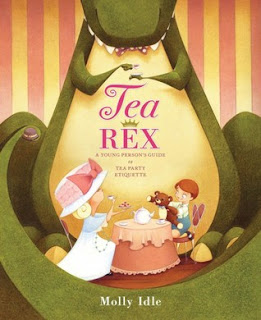 I'll wager that most people can barely begin their day without a first cup of coffee, or in my case, a cup of tea. In Asian cultures there are beautiful ceremonies for the preparation and serving of tea.  Low tea and high tea are British terms used to distinguish between the times tea might be served.  When you host or attend a tea party there is an etiquette to be observed.  In Tea Rex (Viking, an imprint of Penguin Group (USA) Inc.) written and illustrated by Molly Idle adjustments to tradition prevail in a rather BIG way.

When hosting an afternoon tea for a special friend---
greet your guest at the door.

If a grinning Tyrannosaurs rex, invitation in hand wearing a teeny, tiny purple bowler hat and purple and yellow polk-a-dot bow tie, happens to be filling the open door frame, this could present the first of many...er...challenges during the event.  Having him follow you to the parlor is not going to be easy when he can hardly squeeze through the door.  With meeting the other guests and finding one's spot at the table complete, the polite conversation begins.

In response to shenanigans involving cutlery on the part of the younger brother, Mr. Rex lets out a mighty loud roar of approval.  Offering food, despite its variety, and the pouring of tea proves to be rather problematic.  The guest's enthusiasm for both is a tad over the top.

Mayhem quickly follows on the heels of one mishap after the other. Appropriate music and dance (more like riding  on a roller coaster at the amusement park) concludes the tea party. Whew!  With the special guest barely, in every sense of the word, out the door, a surprise is delivered to the hosts, actually, a bunch of BIG surprises.


Sentence by sentence in a most prim and proper form, Molly Idle provides a narrative which reads like pages from Miss Manners.  With little stretch of the imagination you can almost hear the voice enunciating each and every word chosen with care.  The pauses between page turns elevate the disparity between what is read and what is seen in the illustrations.


On the front jacket and cover we are treated to a snapshot of a very special occasion but a picture on the back, a circular inset, tells a different story, the real story.  The palette of colors displayed on the jacket and cover are used throughout on illustrations rendered with Prismacolor pencils. Opening and closing endpapers provide charming close-ups of an invitation and thank you note sent by Cordelia to Mr. Rex, the opened envelopes against his bowler hat, the notes held by his versatile tail.

The details in the decor, the characters' attire, the table setting and facial expressions (oh, those eyes) only increase the hilarity.  The "before the roar" and "after the roar" differences are the first of many.  For example in a series of three visuals for When everyone is settled, you may serve refreshments.  Be sure to offer several choices---and cater to the individual tastes of your guests, we see all the characters seated at the table hands and feet reaching toward delectable delights followed by the disappearance of all including a portion of the plate and then "whoosh", the teddy bear in attendance is about to be consumed too. My favorite of them all is the double page spread of what's left of the parlor after the party as Cordelia and her brother push (it's a tight fit) Mr. Rex out the door.  All sense of decorum has vanished.


With delicate, dramatic illustrations drawn to illuminate and accentuate Tea Rex by Molly Idle is most memorable.  The very idea of dinosaurs and tea parties is so foreign to our way of thinking, the humor begins immediately and grows page after page.  You'll be looking for a free date to have your very own afternoon tea.  Who will you invite?

Please stop by Molly Idle's website.  A link is embedded in her name above.  This is a link to Molly Idle Picks Kid-Friendly Dinosaur Books at BOOKish. (Thanks to John Schumacher for tweeting this link.) This book trailer is only the start of a wonderful reading experience.