See What You Can See

Recently cold weather, more like early October, has been visiting northern Michigan.  It's allowed windows to be open and fresh air to circulate through the house.  Last evening, rather than the splashing of Black-Capped Chickadees and American Goldfinches in the bird baths, outside the front picture window I heard a high-pitched chittering.  Two hummingbirds were having a "discussion" about territory. 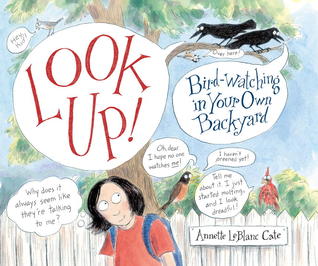 This was a gentle reminder for me to appreciate my feathered friends; all too soon many will be heading south.  Annette LeBlanc Cate has written and illustrated Look Up!: Bird-Watching in Your Own Backyard (Candlewick Press, March 12, 2013) to offer younger or beginner bird-watchers hints on how to enjoy it best.  She reminds readers to take the time to notice what's right in front of our eyes.

Cate's passion for her subject in word and illustration spills out to the jacket, cover and endpapers.  The chirping chatter of birds, comic to the core, is shown on the matching jacket and cover in speech bubbles as a major attention grabber.  Front endpapers broken into panels give advice on What NOT to bring when you watch birds!, What Do You Need to Watch Birds?, And then there's stuff for drawing and taking notes..., and here are some other useful things!, and Bird-Watching Do's...and Don'ts! Appropriate comments from a roadrunner, a buzzard, a seagull and a hummingbird (to name a few) are scattered about the title page and verso.

Buzzard: I wouldn't be caught dead in a backyard. Unless there was dead stuff of course.

Every turn of page is stuffed with information from Cate in the text as well as the funny banter from her avian companions and human characters, including the author's comments about assistance from veteran birder, Jim Baron, and the table of contents.  Her upbeat, four page introduction is sure to entice readers to commit to the book in its entirety if they have not already done so.  Her final four thoughts, sentences, convey truths that will strike a common chord.

Chapter headings read: A Great Place to Start, A Rainbow of Color, Shapes Are Clues, What Are They Up To?, Note the Fine Details, Feathers 'n' Such, Listen Closely, Time for a Field Guide!, The Power of Observation, Where Birds Are At: Habitat, Home in the Range, To You It's Vacation; to Us It's Migration!, and Off You Go to Classification Class!  Snippets (paragraphs, sentences or phrases) of information, detailed but not too detailed, just right, are relayed in a conversational manner within each distinct section.  Asides shown in the speech bubbles continue as rebuttals or reinforcement to the narrative.  Narrow textual extras placed at the bottom of the pages, Wing tip, Look Closely, Foot note and Be a birdbrain add a final layer to the thematic text.

We learn right outside our window or doorway birds are walking, talking and flying.  We learn about the color scheme given to each as well as the tiniest of details; a means for identification.  We learn that specific shapes of bodies, heads, silhouettes in flight, feet and bills help to put birds in certain categories.

Behavior observed on a daily basis helps us to notice differences in a single bird and the presence of others.  Our observations can also place a particular bird in a particular habitat.  Feather color, density and shape can help determine a bird's age.  Terms such as plumage, field markings, migration, range and classification will make their way into the reader's vocabulary.

Most importantly Cate asks us to be silent; listening to the birdsong.  What might each bird be trying to convey?  The same bird can sound differently according to need.

Using panels again on the closing endpapers, readers see such heading as Some Thoughts about Bird Drawing, and Some last tips for you. In drawing Annette LeBlanc Cate asks readers to first focus on shape and practice, practice, and practice some more.  Everywhere we are, birds are.  Look, listen, and get out your sketchbook.


Two words pop into my mind when I think of this book, information and humor.  Factual presentation in the body of the book and in the extra captions is worded specifically for a novice to bird-watching.  It is countered with the spot-on statements liberally loaded with fun made by the gathered birds.  Here is a sample.

Some birds sport fanciful hairdos and cool little hats (field guides call 'em crests). Some crests are small and secret, like those of the Orange-crowned Warbler and Ruby-crowned Kinglet, and only shown when the bird is feeling aggressive.
One bird to another: We're like the Incredible Hulks of the avian world.
Reply: Yeah! You see the crests up, you gonna get messed up!


All of the illustrations rendered in watercolor and ink are as light and airy as birds in flight.  Reminiscent of sketchbooks themselves, they invite exploration on and off the page.  It's as if  Annette LeBlanc Cate has shared her personal observations with her readers, presenting us with pages from her own books.  No two pages are alike; readers are met with a visual potpourri, a splendid representation in layout and perspective.


To date Look Up!: Bird Watching in Your Own Backyard written and illustrated by Annette LeBlanc Cate has earned four starred reviews, The Horn Book, Kirkus, School Library Journal and Publishers Weekly.  It has earned a Parents' Choice Gold Award for Non-Fiction Spring 2013. I have had it in my hand at my favorite indie bookstore, McLean & Eakin in Petoskey, several times.  But it was a conversation on Twitter between two members of my PLN, Katherine Sokolowski and Jen Vincent (who reviewed it here) and myself that made me realize I had to read this book now.  It is a must read folks for any age!

Here is an interview with Annette LeBlanc Cate at Prairie Birder about this title that is completely fascinating, part one and part two.  Here is a link to the publisher website to take a look at two of the book's pages.  Not only is Annette LeBlanc Cate passionate about birds but this video clearly states her commitment to children's picture books.