Shh...don't tell my furry friend but I just finished reading a book about a C...A...T.  This is no ordinary cat either; electric guitar blue in color, large, expressive amber eyes with a white nose precisely in the center.  Most definitely befitting the label, clotheshorse, loving shoes and now, a particular bright yellow shirt as he hits the scene with a beat. 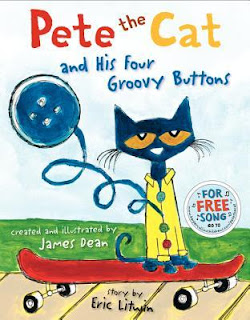 Pete the Cat and His Four Groovy Buttons (Harper) story by Eric Litwin, created and illustrated by James Dean, is the third Pete title; Pete the Cat:  I Love My White Shoes (March 2, 2010) and Pete the Cat:  Rocking in My School Shoes (July 26, 2011).  Litwin and Dean are quite the team blending their narrative and illustrative talents to bring readers one cool cat.  Loving this shirt, four bright buttons trailing down the front, causes a song to burst forth from Pete.

Apparently not being in a very cooperative mood,  the top button springs off the shirt and disappears; leaving readers to ponder at the number of buttons left.  While some might be dismayed at the loss of a button, Pete is not...

Did Pete cry?
Goodness, no!
Buttons come and buttons go.

Our trendsetting songster keeps on trilling his tune changing the number.  Another button, and another and another pop off with the sung number reflecting the loss each time.  Ultimately Pete looks down realizing there's only one button left, the button no one can loose.

From his favorite red chair to skateboarding down the sidewalk, to holding a double-decker from the ice cream truck to cruising in his VW to the beach, Litwin adds to the catchy, simple refrain by having readers do simple subtraction on a page all its own.  What's Pete thinking as these fasteners follow a beat to a different drummer?  Not too much; the occasional thought balloon indicates this is one, laid-back dude.

Turquoise endpapers spotted with vivid buttons of varying shades and sizes welcome readers.  A brilliant red two page spread announces the title information picturing Pete in his shirt.  Dean paints this title in bold, primary combinations with hues of green and some white filling in his distinctive black lines.

All the pictures cover the full two pages except when the new number is announced and the verse alters. As the buttons pop off the springy, exaggerated spiral adds to unexpected (initially) fun. The mouthless look on Pete, in any given situation, is so deadpan readers have to laugh.

Writer Eric Litwin and illustrator James Dean add a winner to the collection with Pete the Cat and His Four Groovy Buttons; a toe-tapping tune, a sprinkle of math and an attitude of gratitude.

Go to the HarperCollins Children's website for these titles to download the tunes and enjoy the extras.