Dogs Will Be Dogs...They're Back!

I love walking through bookstores.  Strolling past shelves lined with old and new friends alike, gazing at the spines and covers, is akin to a little bit of heaven on earth.  There is nothing better than visiting your favorite Indie bookseller only to discover a very special author/illustrator has made good on a promise. 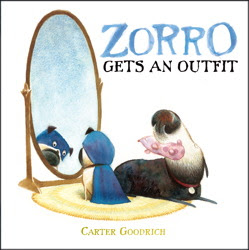 Those two lovable characters introduced by author/illustrator Carter Goodrich in Say Hello To Zorro! have returned in a new title, Zorro Gets An Outfit (Simon & Schuster).  Mister Bud and his new housemate, Zorro, are inseparable canine companions, day in and day out.  Loving the routine of their lives together, makes them most contented.

On the day in question all begins normally; noses resting on their human's bed covers, tennis ball at the ready, breakfast side by side and the wait at the door for the morning walk.  What do they hear instead of the jingle of leashes but...

The duo are wondering what in their doggie universe could be more important than the first venture outside for the day.

A blue hooded cape lined in red, appropriately aligned holes for ears and eyes, is being offered to Zorro.  Holy Dog Biscuits!  You have got to be kidding.  Zorro is humiliated at being made to wear this costume.

All of a sudden he no longer wants to go out and Mister Bud can still hardly wait.  His embarrassment hangs about him as does the cloak; the neighborhood dogs and even Slim, the cat, poking fun at his attire.  Mister Bud tries to perk Zorro up with a game of stick at the park with no success.

But wait a minute.  Who's that white blur in the striped sweater and snazzy bandanna chasing after the Frisbee?  It's tricky, faster-than-a-freight train Bart; Bart wearing something besides his fur.

Bart wants to run a race with Mister Bud and Zorro.  The trio speed through the trees over the grass, each vying for the lead.  All leave the park winners, one of the race, one for overcoming life's challenges and the third with the restoration of his best bud's happiness.

As in the earlier title the story is told in simple spare sentences set in the center of a single white page or placed above or beneath an illustration.  This tale, taking place in the course of single day, is enhanced for readers with separate, hand-painted text for the human's remarks, the thoughts of the two friends, the other neighborhood dogs and the single striped feline, Slim.  Pristine pacing provides the perfect enticement.

Readers are greeted by endpapers depicting eight different small studies of Mister Bud and Zorro with that pesty outfit; trying to get if off, playing tug of war, running or even Mister Bud trying it on.  A small hint of Bart's appearance, later in the story, is seen leaping off the title verso.  Carter Goodrich's masterful use of watercolor painting captures the characters' every expression; pleading for the day to begin, anxious for the walk, the total dejection and discomfort of Zorro, Mister Bud's supportive efforts, Bart's zippiness and the complete, wild abandon of running full tilt, in a race, with your peers.

There are more than several illustrations in this title I would happily frame and place on the walls of my home; the morning scene in the bedroom, Dart facing forward Frisbee firmly gripped in his jaws, or the three running with dogged determination at the reader.  Carter Goodrich promised that Say Hello To Zorro! was the beginning of a series but what he failed to mention was how superb Zorro Gets An Outfit would be.  Dog lovers are going to gobble this up for the treat it is and no one will be able to read it just once.

If you follow the link attached to Carter Goodrich's name above you will be able to see more pages from this title.  I am most definitely adding this title to my Mock Caldecott list for 2013.
Posted by Xena's Mom at 5:52 AM