Did I Really Say Yes?

By the time I reached high school permanent lines of worry had found a home for life on my forehead.  As a member of Girl Scouts I took the motto, Be prepared, and the slogan, Do a good turn daily, more seriously than most.  For these reasons empathy for certain people and characters in literature is second nature; much like every breath I take. 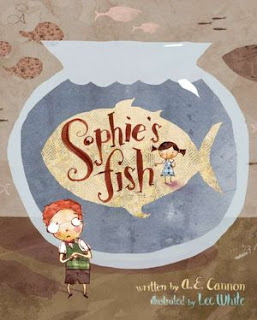 Sophie's Fish (Viking) written by A. E. Cannon with illustrations by Lee White is a brief exploration into the mind of a young boy who commits to a good deed but is plagued with second thoughts.  Without a doubt this little guy has inherited a Murphy's Law gene.  Reality is quickly overshadowed by one very vivid imagination.

Sophie, a classmate of Jake's, asks him just before school is out on Friday if he will take care of her fish while she visits her gram.  Not giving it a second thought, (How hard can it be to babysit a fish?), he says yes.  At home with the minutes ticking by before her arrival, he begins to wonder about the wisdom of his decision.

He truly has no understanding about proper fish habits.  He pictures the fish wanting:  to eat a snack, to play a game, to hear a story before naptime, to be covered in a special blanket or Sophie to come get him.  Yikes!  This is a major disaster waiting to happen.

He has no ideas; none whatsoever.  What's a worry wart to do?  What else can he do but to say...  The doorbell rings.  Jake and Sophie surprise one another...bigtime.

A. E. (Anne Edwards) Cannon, employing an economy of words, manages to convey every nuance of young Jake's emotional state.  Her projections of fishy desires mimic those of acquiring an unknown human house guest.  Her "what-ifs" are candidly comical.

What if Yo-Yo gets cold while listening to a naptime story and wants me to cover him up with his special blanket?  Do fish care if their special blankets are all wet?

Before the cover is even opened you know that a red-haired, bespectacled boy in shorts, vest and bow tie is hesitant about a fish belonging to a rosy-cheeked, Sophie in pigtails.  Plain sea green endpapers, front and back, enhance the fish theme as the title page, verso and dedication are placed on a background replete with fish depicted in various sizes and mediums.  Lee White, using watercolor combined with mixed-media collage heightens the story with detail and a keen sense of humor.

At each reading the most intricate of fish images become apparent; depictions on the blackboard at school, as leaves on the trees, the tree bark resembles fish scales, the hands on Jake's clock, and the pattern on Jake's towel.  Suppositions by Jake are exaggerated; the potential game is depicted with a large fish attired in pirate garb, eye patch in place, sword in hand, splashing in a tub riding a large yellow rubber ducky.  Newsprint, patterned paper or fabric used in likely and unlikely portions of his illustrations adds texture, visual interest and an engaging uniqueness.

The splendid array of artwork by Lee White coupled with the polished narrative of A. E. Cannon make Sophie's Fish a charming, funny story that readers will beg to hear again and again.  If you want to learn more about A. E. Cannon and Lee White follow the links to their names at the beginning of this post.  A. E. Cannon's blog posts are hilarious.  Lee White shares artwork from his many books as well as several pages from this title.
Posted by Xena's Mom at 5:50 AM