From A Tale, Many Tales

Although February 7, 2012 marked the 200th anniversary of Charles Dickens's birth, any day, any year is a good time to celebrate the life of a writer whose influence is timeless and far-reaching.  For many, like Dickens, childhood can be full of nearly unbearable hardships.  In reading of those whose dreams are realized despite life's difficulties, it's easier for the flame of hope to grow stronger. 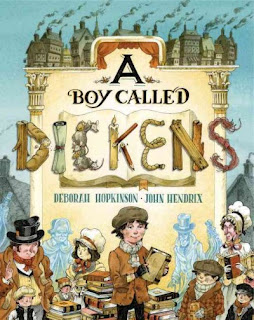 A Boy Called Dickens (Schwartz & Wade Books) written by Deborah Hopkinson, illustrated by John Hendrix, shadows Charles Dickens in his twelfth year for a short period.  His family has made their home in a London of old.  A cold, foggy winter morning finds Charles watching, with longing, a group of boys carrying food and books.

Unlike them, Charles is not on his way to school but travels down to the river Thames.  Within the walls of Warren's, a blacking factory, he will spend more time than any child should.  During those long, tedious hours he entertains other boys with his clever stories.

Late at night he makes his way through the streets of London stopping to get a bite to eat.  Home is a lonely attic room in a house much the worse for wear.  Weary but inspired he continues a story lying on a cot writing with a treasured pencil on his slate.

Come Sunday readers discover that Charles has a family, parents and siblings, living in Marshalsea Prison.  Cramped living quarters, a single room, is the result of his father owing a forty-pound debt.  Months later good fortune shines on the Dickens's clan but not on Charles.

Bringing History to Life
One Story at a Time

This story, backed by careful, relevant research, introduces readers to a pivotal point in the childhood of Dickens. Using words of invitation the narrative follows Dickens through the dreary days of demanding labor, the bustling streets of London, and as stories grow in the garden of his mind.  Vivid, detailed descriptions brimming with poetic language bring the history off the page into the readers' reality.

We must wait a long time for the workday to be done--ten hours.  Finally, Dickens and the other boys spill out into the darkness.

If Hopkinson's language causes the story to reach out, surround you, the illustrations of John Hendrix will pull you right in.  Opening the book jacket, flaps included,  reveals an entire display of Dickens's characters real and imagined set among a murky London, smoke puffing from rows of buildings.  Front endpapers reflect the childhood of Dickens, rats, a lantern, items used at the blacking factory, an old shoe, all placed on what appears to be an faded paper background.  On the closing endpapers books are scattered about the identical canvas.

Rendered in graphite, pen-and-ink, and fluid acrylics Hendrix's pictures are an amazing puzzle pieced together with intricate lines, Old World colors, motion, expression and a true sense of the historical period.  Exhibiting a flair for the unique, such as the word DICKENS in the title, the art of Hendrix stimulates a desire for closer examination.  Varied layouts enhance the storyline beautifully but his two page spreads are wonders to behold.

Two notes, one short and one longer, by the author follow this informative, engaging read.  Author Deborah Hopkinson and illustrator John Hendrix partner to help readers step back in time, to catch a glimpse of a life lived.  They excel in A Boy Called Dickens and we readers are the better for it;  recipients of their gifted efforts.

Please follow the links to Deborah Hopkinson's and John Hendrix's websites attached to their names.  Each contains additional interviews, biographical information and more illustrations from the book.
Posted by Xena's Mom at 6:25 AM