As I may have stated before, every single one of us who has found the right book for the right reader at the right time knows, without a doubt, that books change lives.  From our own personal experience we treasure those titles evoking a change in our perception, adjusting our levels of tolerance, and leading us to definitions of absolute truths.  Those books which offer us the chance to change are not always works of fiction. 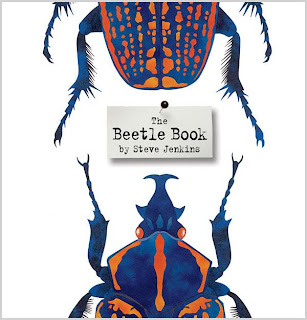 When I hold a book written and illustrated by Steve Jenkins in my hands, I am certain of being enriched in ways I am not expecting.  That being said, nothing could have prepared me for the impact of reading his newest title, The Beetle Book (Houghton Mifflin Books for Children, April 3, 2012).  Stunning visuals accentuated with astounding facts clearly place this volume in the category as one of the finest nonfiction books of 2012.

Using a stark white canvas for his jacket and cover illuminating a single beetle (rose chafer beetle) on the front and twenty-six others fitted together across the back, Jenkins challenges readers to really look at what might be right in front of their eyes. His torn-and cut-paper collage illustrations are painstakingly formed in detailed accuracy.  Even the book's title appears as if a label on a naturalist's bug collection box.

Endpapers swirl with looping spots patterned like leaves or bark colored in shades of green, red and an antique gold.  Following in the front are two bold orange-red pages with the title information written in white within a beetle silhouette on the left as on the right a huge head with open jaws hovers over the tile tag.  These colored pages are repeated in the back as background for a list of each beetle's scientific name, where in the world they live and if not noted in the body of the book, their size.

Line up every kind of plant and animal on Earth...
...and one of every four will be a beetle.


Continuing with white pages throughout readers are treated to beetle variations, beetle basics as part of the insect family and the parts found on each and every beetle.  Evolving at about the same time as the dinosaurs adaptions by beetles assisting in their survival are disclosed.   During his information impartment Jenkins shows the beetles enlarged in color but black silhouettes reveal the actual size.

Beetles senses are keener and more unusual; delicate antennae of the feather-horn beetle make it aware of chemical signals from other beetles, tufts of hair on the body of the African jewel beetle protect it from predators through vibration and the whirligig beetle has four eyes, two for the surface of the water it skims and two for looking underneath the water.  I will never look at those quite the same way again.  Beetles battle with body parts and unique systems of chemical protection.

Stages of life, common and unusual, are disclosed; a female giraffe weevil will lay a single egg in a leaf rolled up like a tube by the male.  As eating habits, vegetarian and carnivore, are related I am certainly glad not to be a part of the beetle world inhabited by the six-spotted green tiger beetle.  Use of sound and light to signal and protect are more characteristic in some beetles than in others.
Continuing with a discussion on camouflage and methods of movement, Jenkins concludes with amazing facts about the  smallest and largest beetles and their parts.

As a Caldecott Honor award winner in collaboration with his wife, Robin Page, in 2004 for What Do You Do With a Tail Like This?, Steve Jenkins has set himself apart with twenty-eight titles including The Beetle Book due to his distinctive artwork coupled with an intriguing array of factual text arranged to invite and educate.  His ability to zoom in and focus with intent on any given subject is truly gifted.  Readers will learn things they never knew they wanted to know but will be glad they now do.  I think I've become a beetle person; read this and you will too.

Enjoy Steve Jenkins's website by following the link to his name at the beginning of this post.  Connect to this link for one of several interviews at Seven Impossible Things Before Breakfast.  As a member of Literacyhead you can have access to other resources on Steve Jenkins; lessons on art and literacy using his books.  A discussion guide has been prepared at this link.