Dare To Be Scared...

There is a special kind of tension, almost a sense of urgency, in a good ghost story; the wanting to know but being slightly afraid to know, for characters and for readers.  Whether friendly, helpful even, or malevolent, with deadly intent, the ghosts, in the best of this kind of tale, are so believable you will be looking over your shoulder, wondering if the play of light making a shadow is not really something else.  What makes it even more disturbing is if only certain people can see these visions; causing them to doubt their sanity. 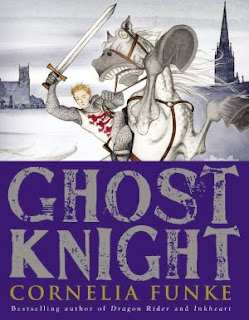 When authors base a haunted story on a place already steeped in the tradition of storytelling, sometimes the line between fiction and truth blurs beautifully as in Cornelia Funke's newest title, Ghost Knight (Little, Brown and Company).  After a visit to Salisbury, England and the Cathedral School there, an idea began in Funke's fertile fantastic mind.

I was eleven when my mother sent me to boarding school in Salisbury.  Yes, granted, she did have tears in her eyes as she brought me to the station.  But she still put me on that train.

Jon Whitcroft is feeling adrift for more reasons than being sent to boarding school.

Since the time of his father's death when he was four, he has had a solid place in the family hierarchy.  When The Beard, a new man, comes into his mother's life his sisters and even the dog welcome him with open arms.  Now removed from his home, after numerous failed attempts to rid them of this intruder, Jon is miserable.  But that misery is surpassed by extreme fear when, on his sixth night at school, he looks out his bedroom window to see three gruesome ghosts who clearly have come for him.

Trying to believe his imagination has gone wild, his roommates, Stu and Angus, could not see the ghosts, Jon almost has himself convinced until the next evening.  When they appear the number of ghostly riders has increased by one, the leader.  Jon makes a fool of himself in front of a group of students and an instructor.

To his surprise the next day a local girl, Ella Littlejohn, attending the school approaches him believing he can see the ghosts because she can too. Her grandmother, thought by some to be a witch, conducts ghost tours in the area for tourists.  The toad-loving, spunky granny reveals the nature of Jon's persistent phantoms advising him to get as far away from Salisbury as possible.

Lord Stourton was hanged for murder and buried with four of his servants; one of the most ghastly murders of the day (1556), that of William Hartgill and his son, John. Hartgill is Jon's mother's maiden name.  Leaving Ella and her grandmother, Jon wondering if he will live to see another day, is stopped by Ella.  She has a plan.

Jon and Ella call forth the ghost of a dead knight buried in the Salisbury Cathedral, William Longspee, asking for his assistance.  But even assistance freely given, a lifetime bond created, can come at a price.  What has been stolen must be found; trusting the beings of the hereafter can be  precarious at best.

Escalating events double the life and death scenario with help coming from the unlikeliest of sources.  Demon hounds, ghost possession, a peeler, gatherings in cemeteries and battles among the living and the dead race readers along page after page.  Friendships that even death can't break are forged and opinions shift as all the characters converge toward a heart-pounding and heartwarming conclusion.

Cornelia Funke's writing has never been better; creating a sense of time, place and realistic characters, dead or alive. It's a given that she has penned an extraordinary adventure laced with ghosts, good, bad and somewhere in-between, but this is also a story of an eleven-year-old boy whose world has gone topsy-turvy.  How he navigates through this narrative, his family and new friends, is depicted with clever thoughts and dialogue.

Here are a couple of examples.

Four ghosts and a witch's granddaughter.  Can't get crazier than that, I thought.  But of course I was wrong about that as well.

The air behind the heavy doors was so chilly it made me shiver, and the twilight between the gray walls wrapped itself around me like a protective blanket.

Truth and lies, love and hate, then and now all blend flawlessly in Ghost Knight written by the gifted Cornelia Funke.  An author's note explains her visit to Salisbury and how this book began. Terms and noteworthy persons, not familiar to readers, are explained in a glossary.  Black and white drawings by Andrea Offermann compliment the story contributing to the atmosphere.

At the Scholastic Stacks website is an interview with Cornelia Funke and more information about other titles she has written.  The publisher, Little, Brown and Company,  of this title has posted the first three chapters.  I guarantee you will be hooked.