Where Would Superheroes Be Without Them

I first became acquainted with the art of author/illustrator Dan Santat when I read and reread the title, Oh No! (Or How My Science Project Destroyed The World) by Mac Barnett which I reviewed on this blog.  Since that time I have tried to make myself familiar with his other works either as an author and illustrator or as an illustrator for another author's title. 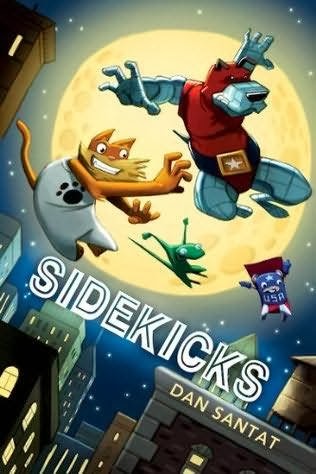 His new graphic novel which he wrote and illustrated, Sidekicks, is pure Santat from start to finish. It
is steeped with his own special brand of humor and characters that are larger than life. His bold color choices tending toward the primary, firmly drawn lines that shape his signature images and the expressive eyes that depict a total spectrum of sentiments, are the best of the best.

As soon as the cover is turned our eyes are greeted with a wordless picture of a box with large holes around the perimeter, a single eye peeping out, FRAGILE stamped across the side, foreshadowing the arrival of an occupied container.  The two page spread of a caped man flying through the tops of city buildings is the title page.  The first series of four panels, beginning the story, again are wordless but clearly convey a dog waiting not quite patiently for a walk gazing at the door.

Harry, Harrison Blake,  (aka Captain Amazing) is down for the count; a victim of his peanut allergy.  He decides to hold auditions for a sidekick; he is not getting any younger.  What he does not know is that his faithful companions, a dog named Roscoe and a hamster called Fluffy have ambitions to use the super qualities of their own, the least of which is the ability to talk.  Sidekicks indeed!  Each of them seeks to raise their abilities to noteworthy attention.

A delivery arrives.  It seems that the owner of the mysterious gazing eyeball is a chameleon, Shifty by name.

Manny, a former family member known as Static Cat, now roaming the streets as The Claw comes on the scene when he saves Fluffy and Shifty in the nick of time as the first of their heroic escapades goes sour.

In a short amount of time the characters and their personalities have become well known to readers.  The stage has been set.  Thrown into the mix is a snarky villain, Dr. Archibald Havoc, recently released from prison on parole.

A rollicking adventure of the highest order ensues replete with action that explodes off the pages and does not quit.  Varied panel placement and size heightens the mounting tension and tightens the storyline to a fever pitch.  Dialogue is snappy; sound bites completing the pictures.  Santat is truly gifted at word choice.

What ties it altogether are humor and heart.


To date I've read this twice; before I've hardly begun I'm smiling and I don't stop until the final page is turned.  More than a couple times I laughed out loud, even the second time through.  As soon as page eleven when Roscoe and Fluffy are trying to clean up the popcorn covered floor before Harry walks in, the text and graphics could not have been combined better.

(Permission was graciously granted by Dan Santat for me to post the two pages above.)

I promise you that there will be stretches of time, so expertly fused are the narrative and visuals, that the characters will no longer be on the page but lively animations with you ; it's as if you can hear their voices in your mind.

Running beneath all the heroic action, life questions are addressed.  What is family?  What can be accomplished when you believe in yourself?  Should you do the right thing?  Is teamwork important?  What is the impact of forgiveness?

The final zip, zap, zing of the whole shebang is the last page; a sidekick application to the Society of Super Heroes completed by Dan Santat himself giving us a glimpse into his accomplishments and those people who he thanks.

Our world could use more laughter and love.  Sidekicks written and illustrated by Dan Santat delivers it in spades.  I am ordering several more copies for our library media center and I just ordered one for myself.  This is a keeper and I love it!

PLEASE NOTE:  Click on the link above to Dan Santat's web site.  He has loads of extras for this book including a 275 page PDF file on the making of this masterpiece as well as numerous images that can be downloaded.  This is most generous and what readers crave.

(I am one of those librarians who not only has stacks and shelves loaded with books throughout my home, but also a good sized comic and card collection; mostly Marvel but some DC, too. Trust me, this is a classic.)