Walk A Mile in My Shoes

In her debt novel, Inside Out & Back Again (Harper, February 22, 2011), author, Thanhha Lai, brings readers deeply into the world of her personal life experiences in this outstanding piece of historical fiction.  We step back in time to the year of 1975 beginning in war torn Saigon, South Vietnam.  Within poignant, poetic prose her ten year old character, Ha, tells the story of her mother and three brothers. 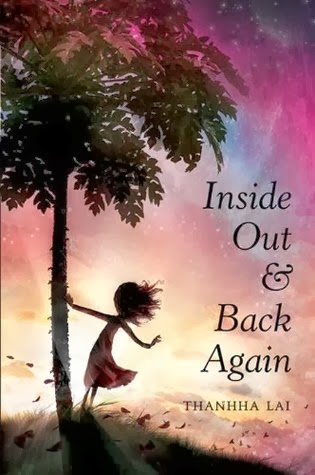 Lai has divided Inside Out & Back Again into four parts; each delineating emotional, spiritual, and life changing journeys that each member of the family makes separately and together.

Part I, Saigon, allows readers to become part of the venue of this city as the North Vietnamese bring the war closer to its center.  The lives of Ha's family were altered nine years earlier when her father, a member of the Navy, was abducted from a roadway near their home as he left for a mission.  Her mother is vigilant in her hope for his return setting up an alter offering prayers and food.  This part of the passage reveals just how much grief this woman, the fabric that keeps this family as one, holds inside.

Everything on the altar
remains for the day
except the portrait.
Mother locks it away
as soon as her chant ends.

She cannot bear
to look into Father's
forever-young
eyes.

Every Friday
in Miss Xinh's Class
we talk about current news.

But when we keep talking about
how close the Communists
have gotten to Saigon,
how much prices have gone up
since the Americans soldiers left,
how many distant bombs
were heard the previous night,
Miss Xinh finally says no more.

From now on
Fridays
will be for
happy news.

As plans are made for their escape choices must be made; which memories will be left behind, which dreams will never be realized.  Those choices are vividly portrayed in heart wrenching detail.  As the family makes their way to a Navy ship, lead by a friend of their father, the conditions of their lives become more fearful, dire and harrowing.

At Sea, Part II, speaks to the crowding on the ship, lack of privacy, dwindling food supplies, the absence of cleanliness and another very sad discovery.  As a reader you begin to wonder how all these people endured leaving everything they have ever known only to be crowded aboard a ship not having any idea where they were going or what the future held for them, with people that are, for the most part, strangers.

Water, water, water
everywhere
making me think
land is just something
I once knew
like

napping on a hammock

laughing for no reason

Their voyage across the ocean is ended when they are found by an American ship that brings them first to a tent city in Guam where more choices are to be made; where do they wish to relocate.  After a plane flight to a tent city in Florida they are finally sponsored by a man in Alabama.  With each of the decisions that are made this family looses a little bit more of who they are; changing their religious beliefs to Christian on their paperwork so they will be sponsored.

Part III, Alabama, is hard to read.  Their acceptance in the community is slow and fraught with discord every step of the way.  The type of food, cast-off clothing, living quarters, while sufficient are nothing like what their home was, learning American cultural references and the language seem almost insurmountable.  It is hard to attend school knowing more than your classmates but being treated as "dumb" due to communication barriers.  But the most insufferable treatment comes from a bully in Ha's class.  The process of acknowledgment by their neighbors is slow but what shines through are the intentions of their sponsor and the kindness of a retired teacher.

In one word, Part IV, From Now On is hope.  A year has passed.  Despite numerous challenges this family has survived because first and foremost they are a family supporting one another every step of the way.  If I were to use another word it would be resilience; resilience in the face of overwhelming adversity.

Thanhha Lai has given her readers a priceless present; the chance to change or reinforce their perspective of those unlike themselves.  She offers us the opportunity to be empathetic; to not only follow in but to walk with people whose lives are displaced through no fault of their own.  Through Ha she has told her story.  It is a story that needs to be heard.