Before I write a review I like to become as acquainted with an author or illustrator as much as possible by reading interviews and the bios they may have on their blogs or web sites.  Sometimes knowing what makes them tick; their source of inspiration, gives insight into why their talents manifest as they do.

Candace Fleming was a storyteller from age seven.  Encouraged by her parents her storytelling was fueled by her discovery of the magic of words in second grade.  Much like a gourmet savoring a new dish, she tasted  words with all her senses and emotions.  In college a new love was discovered, history.

It is the blend of these two, chronicling history and a zest for storytelling, that brings her biographies to that sweet spot.  I truly love nonfiction that is so well conceived that it reads like fiction; incorporating truths so seamlessly with intimate detail using a deliberateness that completely ensnares you until the finish.

As I stated in my review of Amelia Earhart:  The Legend of the Lost Aviator by Shelley Tanaka; illustrated by David Craig, I grew up hearing my Mom speak quite frequently of Amelia Earhart.  Her impact on the roles of and for women, young and old alike, then and now, has been and will continue to be significant.

Author Candace Fleming in her title, Amelia Lost: The Life and Disappearance of Amelia Earhart, begins:

Sometimes it's hard to tell fact from fiction.  Time and again, I unearthed a telling incident or charming anecdote only to learn that it wasn't true.  Frustrating?  You bet.  But it was also enlightening, a reminder that it is often difficult to find the history in the hype, to separate truth from myth. 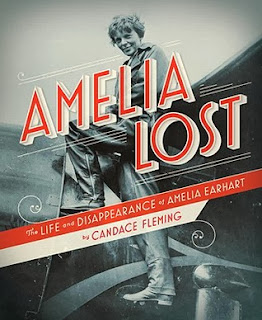 With that being stated and expanded upon in her two page introduction, Navigating History, let's for a moment go back to the Contents page.  It is here that the writing technique that lifts this book to brilliant is revealed.  Fleming begins on the morning of July 2, 1937, the date that Amelia Earhart was to land on Howland Island for refueling.  She had nearly completed her around-the-world flight.  The Coast Guard cutter, Itasca, sat near the island waiting, hoping to see her plane come into view.  Ending that initial chapter with the words, Where, they wondered, was Amelia Earhart?, readers are then taken to the second chapter, to Amelia's birth.

It is the alternating between the narration of Amelia's life and the accounting of those days on and after July 2, 1937, sometimes broken down by hours, that gives this book its edge, ever compelling the reader forward.  Even though we all know the outcome I found myself wishing, as my admiration grew when each segment of her growing from child to youth to young women to aviatrix extraordinaire was shown to us, that the outcome in those July 1937 chapters would be different.  Fleming's research is impeccable revealing a depth to Earhart's life, not glossing over her frailties nor magnifying her strengths; so personal that at times we feel as though we are one of her closest friends.  To me, at least, new revelations about her family, her relationship with George Putnam and the promotion of her career were enlightening.

So as not to confuse readers, the chapters relating the days after her disappearance are set against a gray background.  Those relative to her life up to that point are set on white. Each of the chapters are filled with memorabilia whose placement is timely and does not deter from the text nor diminish its impact.  Set within the chapters are informative sidebars explaining such items as radio call letters, Morse code, a brief history of flight, or what Amelia might eat on a flight.

I did not want this book to end.  It is an extraordinary title about a woman of incomparable value written with care and passion.  Lucky us!  Newbery contender? Without a doubt. This is being added to my personal bookshelf.

Check out this video interview with Candace Fleming on why and how she writes nonfiction; biographies.