In The Still of the Night

Sometimes, yes definitely sometimes, when the unexpected happens our world changes into something extraordinary; a place of wonder. John Rocco's late spring publication, Blackout, pulls a family from their routine endeavors into an appreciation for a simpler life; a life without the distractions of modern conveniences. Based upon the 2003 blackout in New York City Rocco's representation of events is pure magic. 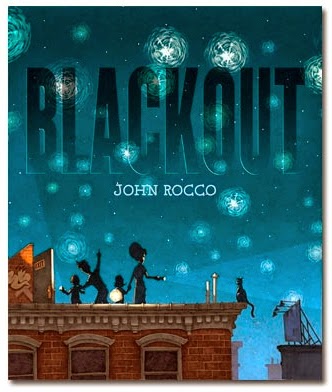 Anyone who knows me knows I just don't read a book; I savor it, examining all its aspects. To my delight Rocco decided to have his book jacket and book cover not mirror one another. Both the jacket and cover illustrations are taken from those that appear inside. Already I am expecting something special; I am not disappointed.

Prior to the two page spread spelling out the title in a blue-black color sprinkled with stars reminiscent of Van Gogh, the reader sees a downcast young boy looking out leaning on a window sill sporting a red T-shirt with a gold star in the center. Light from an overhead lamp and a screen provide the background.

As the story begins:
It started out as a normal summer night....
Rather than watching television or playing a video game the young protagonist reaches up on a shelf pulling down a board game. All he needs is someone to play with him. His older sister would rather talk on the phone, his Dad is whipping up dinner and his Mom is plugging away on the computer. Everyone is much too busy.

Too busy that is until the lights go out; the city and its occupants are surrounded in darkness and silence. Everyone is suddenly not too busy. Gathering around the kitchen table a flashlight and a candle are their only source of light as shadow puppetry takes the stage.

A curious cat leads them up the stairs to the roof, a sky full of stars normally hidden by the city lights, and people; lots of people celebrating the stillness with music, dancing, barbecuing and shouted greetings. But sounds from the street lead them on another journey.

A party and spirit of good will are happening on this level too; children playing in the water from a fire hydrant, singing on doorsteps and free ice cream. When the lights came back on, there is a new normal for this foursome.

While there is a boldness to Rocco's illustrations, his choice of colors are darker more muted; a prelude to the coming darkness. His night without light is lavish in the spectrum of blues and blacks accented in splashes of golden hues made by candlelight flames and flashlight beams. Alternating page layouts, text in speech bubbles or as a story descriptor as well as placement on each page lend the feel that this is a combination picture book and a comic. This creates playfulness as do the touches of humor: Edison's portrait on the wall, the boy's frightened bug eyes in the sudden blackness, and the cat running from a dog shadow puppet. Attention to detail draws the reader deeper into the story; even the jacket flap at the back describing Rocco's achievements shows him at his drawing board through a darkened window.

Author/illustrator Rocco graciously responded to an email of mine inquiring as to his technique for his visuals.  He begins with drawings in pencil which he scans into his computer using Photoshop to digitally add his color.  At Seven Impossible Things Before Breakfast, blogster, Julie Danielson, conducts an interview with John Rocco.  It is a wonderful conversation, as are all her discussions.  Rocco expands on his creative process and there are many more illustrations from his other books.

Blackout by John Rocco makes the reader long for a similar situation. It's about a community caught in like circumstances enjoying this pause. I can just see it now, Family Night without Light. What plans can be made for such an event? Or pair this title with the coming of Earth Hour next year.