And The Rest of the Story Is...

Students at Charlevoix Elementary School know that March is a special month for several reasons---It is Reading Month and...it is when The Last Great Race, the Iditarod is run from Anchorage to Nome, Alaska.  Preparation for the race begins a month in advance within the walls of our library media center through fiction and nonfiction books.  Spreading outside the walls of our LMC via the Internet research on the event expands our knowledge until it starts.  A day by day following of the mushers and their teams from the official web site, using the GPS units attached to the dog sleds, keeps everyone on their toes moving pins across the map tracking their favorite men or women and their athletic canines; especially Mrs. Culver who in the evenings and weekends is glued to her computer screen.

Most students are aware that the Iditarod was begun to keep the sport and art of dog sledding alive as much as it is a commemoration of the Serum Run in 1925.  My students know from books, online sources, movies and television that Balto is known to be the hero of delivering the diphtheria antitoxin as the lead on the team to bring it to Nome.  But they also know that Togo was the lead dog that traveled from Nome and nearly back again logging the most miles of any team in the relay. 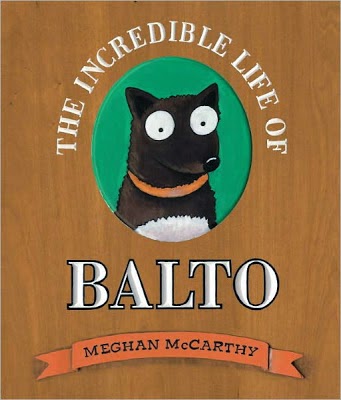 What they don't know about Balto, what happened after the run to Nome, has been written and illustrated by Meghan McCarthy in her newest book, The Incredible Life of Balto.  Let's begin at the beginning.  Front and back endpapers display a simple understandable map comparing the Iditarod route with that taken during the 1925 Serum Run.  The title page, as well as the cover, feature carvings by McCarthy's uncle interspersed with her acrylic paintings.  Balto is on the left; eyes shifted to read the title.

Within the next few pages readers travel back in time to that horrible winter when a deadly disease struck the community of Nome along the Bering Sea.  Their only hope for help was across Alaska in Anchorage. The only means to bring the medicine due to extreme cold, fifty below zero, was by dog sled.

Balto's team driven by musher Gunnar Kaasen successfully ran to Nome.  McCarthy does not gloss over the dangers of the trip including the deaths of dogs due to their lungs bursting from cold.  She relates the extreme weather conditions that both man and dogs faced.

Balto, his team and Kaasen are instant heroes.  Boarding a ship to California their tour of fame starts.  Sculptor, Frederick Roth, designs a statue of Balto which to this day can be seen in New York City's Central Park.  Kaasen and Balto were there for the unveiling.  Balto was a star in a black and white silent movie titled Balto's Race to Nome.  He was a guest at the famous Biltmore Hotel in Los Angeles.  He even had dog food that bore his name.

Something happened along the way though involving a disagreement over money.  The team was sold to a vaudeville act, then sold again to a sideshow where Balto and his mates were all but forgotten.  Fortunately a businessman from Cleveland, Ohio, George Kimble, saw Balto in that sideshow despairing over his negligence. The negligence is implied as Balto's ribs are now showing; he is much thinner.

People began to give money, including Garnet Bielfelt's kindergarten class, to purchase Balto from that sideshow to help Kimble raise the two thousand dollars.  After their purchase Kimble placed them in the Brookside Zoo.

In my opinion while that is a much happier ending than being in the sideshow, it would have been better if they could have run free with other sled dogs in their native Alaska.

There are numerous reasons that readers will come away from their perusal of this book with a deeper understanding of the dog Balto and more importantly they will want to read it again as well as recommend it to others.  The acrylic illustrations convey, through the use of color, layout, and the inclusion of hand painted original artifacts from that event and time, an aura of urgency, heroism, fame and resolution.  McCarthy's use of large wide eyes on all, humans and dogs alike, project a range of emotions.  Are not the eyes the window to the soul?

The final two pages of the volume include a conversation called Detective Work.  Research methods used by Meghan McCarthy to verify the truth presented in this work of nonfiction are shared.  Activities in which readers may engage expanding their understanding of fact versus opinion and its role in history are also added.  An inclusive Selected Bibliography of books, newspaper articles and a radio show finish up her work.

With out a doubt The Incredible Life of Balto is a work of nonfiction that will be read and re-read in the form of multiple copies in our LMC; information that flows like fiction creates a following.
Posted by Xena's Mom at 6:55 AM