As mentioned in a previous post, Early Reader Extravaganza, when we first learn to read our perceptions about our world change.  We gobble up words to quench a hunger.  It is a hunger to know, to understand, to explore, to travel to places real and imagined, to have sensory experiences, to laugh, to cry, to have our hearts warmed, broken and healed and to meet people like us and completely different from us.  We feed this hunger as early readers by bonding with what we find within the pages of books; whether it is information satisfying our curiosity or characters and their situations that actively engage us.

For lovers of canines, two new early reader series supply loads of laughter and the antics of dogs living their best lives.  Doggo And Pupper (Feiwel and Friends, March 23, 2021) and Doggo and Pupper Save The World (Feiwel and Friends, March 22, 2022) written by Katherine Applegate with illustrations by Charlie Alder take us into the home of an older dog living with a cat.  Their humans decide to introduce another dog, a younger dog, into the family.  The results are comedic to say the least. 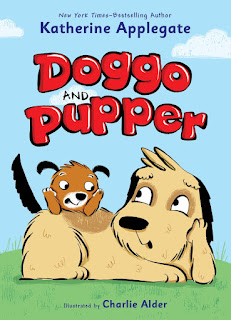 Chapter One
Same Old, Same Old
Every night Cat asked,
How was your day,
Doggo?"
Every night Doggo said,
"Same old, same old."
Then he would wink at the
smiling moon and say, "Could have
been worse."
In support of his same old, same old assessment, Doggo in rhyming two word phrases, seven couplets, describes his day.  He is quick to point out the value of quenching thirst and dispelling tiredness.  To up the funny factor, we discover what Doggo does when his humans are absent.
The subsequent six chapters reveal how Doggo's humans decide to add pep and purpose to his days.  Cat reminds and warns Doggo of the dire consequences of human intervention.  The presence of Pupper changes everything.  Doggo's days are wild because Pupper is wild.  Pupper needs to go to charm school.  He is not happy about this apparent requirement.
Upon his return, his humans are pleased with his behavior.  Doggo is pleased, too.  Cat is the first to point out that Pupper may have lost his wild ways, but he is hardly happy.  That night Doggo is the one with an idea.
His sleepy humans allow Doggo to take the car keys.  Road trip!  Pupper and Doggo play and play and play. Would you believe they went to a drive-in movie?  The duo silently sneak back inside their home.  Cat has a few things to say the next day.  Doggo replies with a familiar refrain. 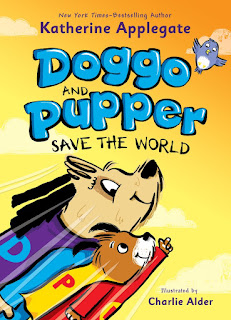 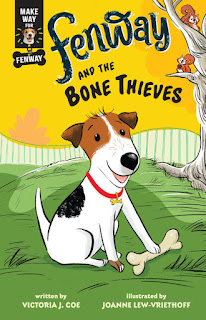 1
THE TREAT PLACE
Everyone knows that dogs are
better than squirrels.  Dogs make
humans happy.  Dogs live
in houses.  Dogs
ride in cars.
Squirrels do
none of these
things.
In this first of ten chapters, Fenway and his humans, Hattie, Food Lady, and Fetch Man are visiting the large store filled with special things for dogs.  All Fenway can think about is treats.  His humans steer clear of the treat section, adding yucky shampoo to the cart.  It is only through sheer perseverance on Fenway's part, that a bone is added to the cart.  Unfortunately, it ends up in the trunk of the car instead of his mouth.
Finally at home, with the bone in his mouth, Fenway shows his treasure to his neighbors, Patches and Goldie, two dogs enjoying their Dog Park next to Fenway's Dog Park.  Then, Fenway hears a horrible and irritating sound.  It is the chattering of not one but two squirrels.  They are plotting to take away his bone.  After successfully chasing them away, Fenway decides the only way to enjoy his bone is to hide it from the squirrels.
After lunch, the rain begins.  Fenway is inside without his bone.  Now he is thinking his big idea is not such a good idea.  Nothing, not a single toy or game, can take away Fenway's desire for that bone, buried in the garden, outside in the rain.
The next morning when the rain has stopped, Fenway can hardly wait to get outside and dig up his bone.  There are two huge problems.  He can't remember where he buried it and the pesky squirrels are back.  Many holes later, Hattie and her friend Angel, Patches' and Goldie's short human, discover the damage done by Fenway.  As they chase him, he initially thinks it's a game, but it is most definitely not a game.
After a flowery shampoo, a nap complete with a squirrel nightmare, and another encounter with the sneaky squirrels in his Dog Park, Fenway makes a startling discovery.  His perspective on the several days of the events are destined to have readers laughing and laughing.  As he is finally chewing on his bone on the back porch, he gets a whiff of hot dogs.  Yum! 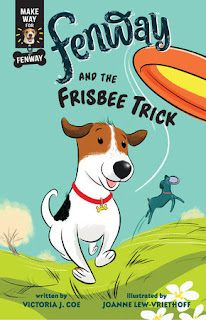