Sometimes the world doesn't change but a perception of the world does.  It may seem almost magical when this happens, but one individual can alter the viewpoints of many by simply being themselves or by a quirk of fate.  We never know when this will happen.  We will remember it. 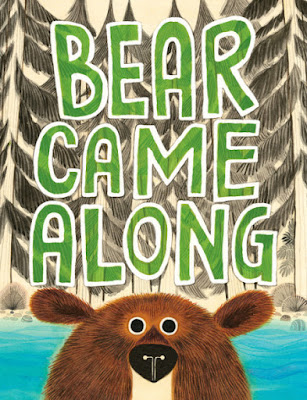 The other very important thing to consider is we not only have this memory, but now we are seeking with anticipation different perceptions of the same thing, things we encounter every single day.  Bear Came Along (Little, Brown And Company, June 4, 2019) written by Richard T. Morris with illustrations by LeUyen Pham is another outstanding collaboration by the team that brought us Sheep 101 (Little, Brown And Company, March 13, 2018).  In this title, Bear Came Along, the actions of one alter the awareness of many.  It's safe to say life along the river is newly defined in a day.

Once there was a river
that flowed night and day,

A bear meanders out of the woods, climbs on a log overhanging the river, reaches toward the water and promptly falls.  Completely soaked he fails to realize he's on an adventure until a nearby frog stops watching and begins hopping.  She hops right on top of Bear.

Bear climbs on the log as Frog, needing a friend, joins him.  When the Turtles appear, they issue warnings instead of fun-filled possibilities.  Beaver, a born captain, climbs aboard.  So now we have an adventure with growing friendships, happiness happening and a great guide who lacks knowledge of altered courses.

Two rambunctious raccoons leap from treetops to join the group racing down the river; all are oblivious of everything except for the scenery passing by them on both sides.  Unable to stop they bump into Duck who is lovingly accepted as a passenger.  Duck (and the entire group) has no idea of what they will see on this wild excursion until they make a shocking discovery.  They are at the edge of a waterfall!

Like a chain made of friendship, they cling to each other as they drop.  SPLOSH!  One bear, one frog, two turtles, one beaver, two raccoons and a duck will remember this day.  They are not alone in their remembering.


One of the first of many elements you notice in this narrative penned by Richard T. Morris is the excellent use of pacing.  The key word, until, links each of the animals' lack of understanding and discovery together. Readers will see the pattern fashioned by this technique.  They will come to realize, like the animals, how richer the lives of the animals are in the presence of each other.  The river starts the story, keeps it flowing and brings it to a conclusion that is not an ending but a beginning.  This is a brilliant circle story.  Here is a passage.

the Raccoons dropped in.

The Raccoons were so excited
about the twists and turns ahead,
but they didn't know they had to be careful . . .
until . . .


Seeing the partial face of Bear at the bottom of the front of the dust jacket, with the river and evergreen forest behind him, leads readers to ask what could possibly happen next.  Why is he there?  What is he thinking?  There are many potential scenarios.  It's when the dust jacket is opened the story thread grows.  On the other side of the spine, the forest and river continue but careful readers will see hidden among the trees, among the reeds and river, the other animal characters in the narrative.  They are not aware of each other, but it's as if they are waiting, too.

On the book case the river acts as a canvas.  Bear remains the same with the text looking watery.  To the left of the spine, we can see portions of the other animals.  There is a marked change in their expressions.

On the opening and closing endpapers we are treated to an exquisite bird's-eye view of the river winding through the forest landscape.  On the first scene shades of black are painted on a creamy white canvas.  A portion in the center is darker than the outlying areas. The bright blue river provides a pleasing contrast.  The characters are tucked into the scene in the order in which they appear.  The second view is a colorful, beautiful reflection of the story and its results.  It's enchanting!

watercolor, ink, and gouache on hot-press illustration board

the artwork by LeUyen Pham makes you feel as though you are holding something rich and rare in your hands.  She makes use of every bit of space.  On the title page a double-page picture shows Bear coming to the river.  With a page turn another double-page picture shifts the perspective giving us a larger view of the river and Bear.  Then the point-of-view changes again to bring us back close to Bear as he stretches to the river from the log.  These varying contexts pair beautifully with the narrative.

The details in each image will have readers pausing.  The illustration sizes also ask readers to savor the story.  The use of portions of animals and portions of scenes is wonderful.  Sometimes the text is placed directly on the visual; other times it is within its own small rectangle.  The word until is larger and bolder.

Two double-page wordless pictures in a row are pure perfection.  A vertical image will have readers gasping.  Each time an animal is introduced readers will find a place for them in their collective hearts.  Their personalities shine in every line LeUyen Pham makes.  And yes, there is humor throughout the artwork.

One of my many, many favorite illustrations is on a single page, edge to edge.  We are very close to the animals crowded on the log.  We see portions of each of the seven.  Bear's face is looking a tad bit worried, Raccoons are thrilled with the ride on either side of Bear, Frog in front of Bear is hugging Duck, Beaver is totally jazzed with this ride to the right of Duck and the Turtles to the left of Duck are scared.  This is not a quiet snapshot, but one filled with a range of emotions.  I can't look at it without smiling.


This book, Bear Came Along written by Richard T. Morris with illustrations by LeUyen Pham, is definitely a 2019 title to include in your professional and personal collections.  It is to be read aloud.  It is to be shared often.  It is to be gifted.  It is about how we are distinct individuals but are joined by something larger than our differences.  It is important for you to read the author and illustrator notes at the end.

To learn more about LeUyen Pham, please follow the link attached to her name to access her website.  LeUyen Pham is a guest at teacher librarian, Matthew Winner's The Children's Book Podcast.  At the publisher's website you are treated to a video book chat with LeUyen Pham about this title (She reveals some marvelous meanings about her illustrations.) and a downloadable storytime kit.

Update:  On January 27, 2020 during the American Library Association Youth Media Awards, this title's illustrator LeUyen Pham was awarded a Caldecott Honor award.  This is her response.