One of life's annoying problems is attempting to fall asleep and failing.  You've tried every trick in the book; wearing your comfiest jammies, wrapping up in your favorite blanket, plumping your prized pillow, and drinking warm milk. Nothing works. 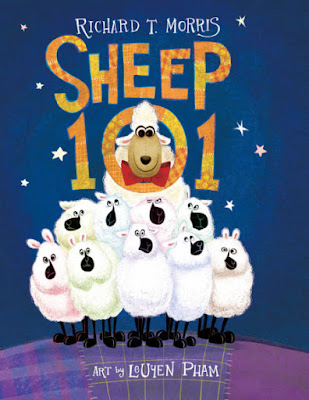 One of the most recommended methods of inducing sleep is to count sheep.  You imagine an endless line of sheep, all looking nearly alike, jumping over a fence.  You number them until you drift off into dreamland.  Sheep 101 (Little, Brown And Company, March 13, 2018) written by Richard T. Morris (This Is a Moose Little, Brown And Company with illustrations by Tom Lichtenheld) with art by LeUyen Pham is about a little boy trying to sleep using this age-old method.

With Sheep 102 following close behind, it's evident Sheep 101 has taken a tumble leaping over the fence.  In the course of their conversation, Sheep 101 reveals being stuck on the fence.  An unseen narrator (the boy) interrupts.  Sheep 101 encourages the friendly flock member to continue.  The boy needs to sleep.

Bounding over the fence and counted, a cow now waltzes into the scene claiming to be Sheep 103.  There are no more sheep so the cow, usually jumping over the moon, is ready for this assignment.  You'll never guess (or maybe you can) who comes

from the edge of the page.

A cloud burst of tears ensues as one of the Three Blind Mice comes tapping along with his cane.  He's Sheep 105.  If you're not laughing yet you will be as the next "Sheep" saunters in after surviving a fall off a wall.

Before another leap, jump or bound happens, a loud voice issues a Code Red.  A famous man and his crew from a well-known land zoom overhead.  Their actions disclose a sought-after outcome.  Good night.  Sleep tight.


Your attention to the story is immediate when the narrative begins with two numbers and two sound effects.  When Richard T. Morris follows this with a conversation between two of the sheep and the unseen narrator, the hilarity level is heightened.  His word choices in the subsequent conversations communicate the attitude of the characters, serving to further increase the laughter factor.  Here is a passage. 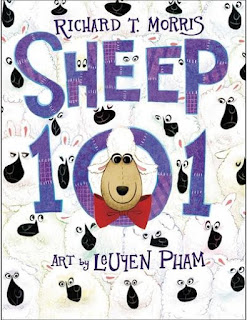 Not having a finished copy in hand but working from an F & G graciously supplied by the publisher, I have seen two different jackets and book case covers.  In this one, the expressions on the faces of the sheep are guaranteed to have readers laughing before they even open the cover.  What LeUyen Pham is able to convey with eyes and noses is brilliant.  One thing certain to prompt a comment from readers is Sheep 101.  Sheep 101 is not like the other sheep.  Along the spine in purple tiny characters from the story are shown; the blind mouse, Humpty Dumpty, the cow, and one very vocal sheep.

To the left, on the back, among the backsides of the sheep shown on the front, characters from the book are facing the reader.  The looks on their faces will also cause many giggles and grins.  A decision to begin and conclude the book using the endpapers is sheer genius.

On the opening endpapers the boy is staring at the sheep clock on his dresser.  A stuffed sheep toy is on his bed.  An assortment of books, a copy of Mother Goose and Three Blind Mice among them, Lego type toys, a megaphone and a Humpty Dumpty lamp are placed on the dresser, too.  All these elements are contained in the closing endpapers but their positions have been altered.  On the verso and title pages Sheep 100 is trotting in from the left and Sheep 99 is gracefully leaping over the fence.  The fence is stretched across the quilt on the boy's bed.

With each page turn the illustrations rendered in crayon and pencil and completed in Adobe Photoshop span from page edge to page edge across two pages.  The color palette for the canvas is in hues of purple and blue with a sprinkling of stars, mirroring nighttime and bedtime.  The characters are in full vibrant color.  When the unseen narrator is speaking his words are in white.  The other dialogue is shown in speech bubbles.  The sound effects are bold and elevate the mood.

What readers will appreciate the most are the body positions and facial expressions on the characters.  They are humorous with a capital H!  Meticulous care has been given by LeUyen Pham to the details.

One of my many favorite illustrations is for a portion of the noted passage.  For this image LeUyen brings Sheep 102 close to the reader.  He fills most of the right side, crossing the gutter, and a large portion of the left side.  He is not happy and is staring directly at the reader (the boy).  His foot is raised to his eyes, conveying he will be watching the boy.  LeUyen has drawn dotted lines from his eyes to his foot.  In the background on the right, Sheep 101, stuck in the fence, is looking rather . . . well . . . sheepish.


If you are looking for a rollicking romp of a read for story time with a group or one-on-one at bedtime, Sheep 101 written by Richard T. Morris with art by LeUyen Pham is a first rate choice.  We all know there is nothing better than shared laughter with children.  They will be begging you to read it again.  You'll want to have a copy of this title for your professional and personal collections.

To learn more about LeUyen Pham and her other work, please visit her website by following the link attached to her name.  LeUyen Pham is featured at The Author Village. Enjoy the video chat.
Book Chat with the Illustrator: LeUyen Pham from LB School on Vimeo.