Their willingness to tap into their creative resources is one of the most enchanting things about children.  You can give them the tiniest hint of possibility and they will fashion a whole new world view. They are continuously in pursuit of stories, real and imagined.  If anything is non-existent they can bring it to life. 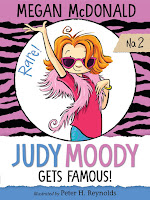 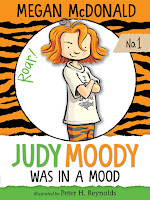 One of the most talented fictional characters in this respect, a heroine to her readers, is Judy Moody.  This eight-year-old bundle of limitless energy is celebrating a new look for her first thirteen books.  Her signature tiger print surrounds her in a variety of poses.  These vibrant designs were released in paperback on April 10, 2018. 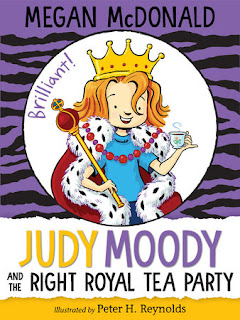 Becoming acquainted with Judy Moody is a rich and rare experience.  All her readers, new and old alike, will be thrilled to know book fourteen, Judy Moody And The Right Royal Tea Party (Candlewick Press, September 11, 2018) written by Megan McDonald with illustrations by Peter H. Reynolds presents this charming personality in all her beloved glory.

Judy Moody had been Doctor Judy, M. D.  She had been Judy Monarch Moody and Madame M-for-Moody.  She had been a Girl Detective and a Mood Martian.  She had even gotten a picture of her famous elbow in the newspaper.
But she, Judy Moody, had never been a queen.

Not being a queen is about to change for this irrepressible girl.  Her Grandmother Lou impresses her with stories of  a relative who saved the lives of others aboard the Titanic before perishing and another relative who saved someone from the Tower of London during the reign of Queen Elizabeth I.  (The current project for Judy and her classmates is to create a family tree.)  With this latest information, before you can even think gobsmacked, Judy is certain she comes from royalty.  With hope in her heart, she writes a letter to the current Queen of England, including questions.

During one of the library times given to Class 3T to work on their projects, Judy fascinates her friends with her Queen of England connections but she's also a bit annoyed at Jessica Know-It-All Finch who seems to know a bit too much about British terms and royalty.  Grandma Lou stops in again giving Judy and her brother, Stink, a peacock pin now known as the Royal Moody Sapphire.  Is that Judy digging a moat around the infamous Toad Pee tent?  When her attempts at placing a royal fish in the puddle fail, a lure for swans results in an unexpected surprise.

A family field trip yields more than fascinating fun for the Moody family.  Judy is shocked by what her spying reveals.  If you think that's the end of shocks for our intrepid gal, you're wrong.  Family tree reports on the following Friday have her trembling with disbelief.  A pinky swear and a promise seal a new deal.

Party invitations in secret code translate into a new attitude for Judy Moody.  Responsibility comes with being a royal, placing friends first.  And one final arrival will have readers standing up and cheering for this gusty girl.


Grinning from ear to ear from page one to page one hundred forty-two is easy when you read Megan McDonald's latest installment in the escapades of Judy Moody.  Her ability to portray the heart of an eight-year-old, her classmates, and family is masterful.  Judy's point of view will have readers laughing out loud.  The conversations between all the characters are wonderfully realistic.  The inclusion of British sayings is the crowning touch.  Here are several passages.

"Queens got their heads chopped off.  No thanks."
"For your information, a queen gets to live in a castle and drink tea and play Monopoly all day and boss people and own as many dogs as she wants.  And she doesn't have to do homework.  Ever."
"Well if you're royal, then I am, too."
"Yeah, a royal pain."
"Hardee-har-har," said Stink.
"I wish I had a lucky sixpence for every time you said that, Stinkerbell."

"You better go to the loo and check," said Jessica.  "Just in case."
"The loo?" asked Rocky.
"The who?"asked Frank.
"The bathroom," Judy whispered.
Judy looked in the mirror, front and back.  Phew! No sign of undies.  She brushed eraser crumbs off of her KEEP CALM AND CARRY ON shirt.  Wait just a Big Ben minute.  How did Jessica A. Finch know so much British stuff?


Using an ARC generously supplied by the publisher much of the artwork of Peter H. Reynolds is softly sketched and placed among the narrative. There are plenty of full page pictures, small insets and one fabulous two-page image.  The details in each illustration will have readers pausing to enjoy the moments being depicted.  Light-hearted and true-to-life, the portrayals of the characters will further endear readers to these fictional people which seem as real as your next door neighbors.


Readers will be counting the days until the release of Judy Moody And The Right Royal Tea Party written by Megan McDonald with illustrations by Peter H. Reynolds.  This courageous and confident girl will further secure a place in readers' hearts with this fourteenth title.  You will want to have multiple copies in your professional collections and a copy for your personal collections.

To learn more about Megan McDonald and Peter H. Reynolds, please follow the links attached to their names to access their websites.  Be sure to visit a special website dedicated to Judy Moody.  Here is a link to a behind-the-scenes look with the Judy Moody creators.  Here is a link to a Judy Moody Day activity kit.  Many of the thirteen titles have additional resources specifically for each title such as an activity kit and teacher's guide.  Here is the Publishers Weekly article, A Makeover for Judy Moody.  Shelf Awareness dedicates space to the relaunch.  The cover reveal for book fourteen was hosted by the Nerdy Book Club.  Reading Rockets conducted video interviews with Megan McDonald.  Megan McDonald chats with teacher librarian Matthew C. Winner on The Children's Book Podcast #432.  Peter H. Reynolds is a guest on KidLit TV StoryMakers.