Silent Watchers Of The Water

With the understanding there is no other state in the United States with as much freshwater shoreline as Michigan; it's no surprise there are at least one hundred twenty-four lighthouses positioned along the upper and lower peninsulas.   They are designed and constructed in a variety of shapes and sizes with different materials.  Some are tall, towering and highly visible.  Others are shorter and sturdier.  Still others appear as actual houses with a type of tower incorporated into the structure. 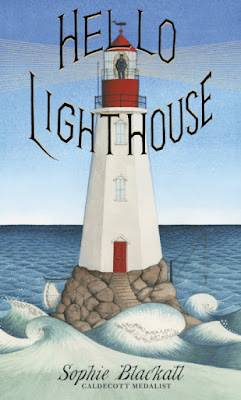 The oldest operating lighthouse in Michigan was built in 1825, rebuilt in 1829 and again in 1861.  It guards the entrance to the St. Clair River on Lake Huron.  Can you imagine the stories to be heard if the walls at the Fort Gratiot Lighthouse could speak?  Our lighthouses represent our best efforts to keep travelers and sailors safe regardless of the circumstances.  Hello Lighthouse (Little, Brown and Company, April 10, 2018) written and illustrated by Caldecott Medalist (Finding Winnie:  The True Story of the World's Most Famous Bear Little, Brown and Company, October 20, 2015) Sophie Blackall chronicles the life of a lighthouse keeper in a lighthouse standing strong against time.

On the highest rock of a tiny island
at the edge of the world stands a lighthouse.

At the top of the lighthouse a beacon casts its light without ceasing hour after hour.  This story starts with the arrival of a new keeper.  It's his job to polish the lens, refill the oil and trim the wick.  He needs to make sure the clockwork is always wound so the light will keep moving.  Within the pages of a logbook he records his daily activities.

When not tending the light, he paints the walls of the lighthouse rooms, drinks tea, fishes and wishes for company.  He writes letters and waits.  When the next tender comes with food and oil, it also carries a longed-for companion.  Our keeper now has his wife.

Wild winds, crashing storms, thick fog and ice as far as the eye can see, do not deter the keeper.  He rescues sailors whose boat crashes on the rocks.  When he becomes ill, it's his wife who becomes caretaker and keeper.  Everything is noted in the logbook, most importantly the birth of their child.

Years later when the tender comes, it delivers food and oil and a letter.  The life of the keeper, his wife and child are about to change.  The coast guard brings a new lamp.  This new lamp does not need someone to polish the lens, refill the oil and trim a wick.  A machine keeps it moving.  When the ship leaves, so do the keeper, his wife and their child.

The rooms in the lighthouse are now empty.  The beacon casts a light continuously.  An answer shines back.


Like a song of the sea, the words of Sophie Blackall invite and lull readers into the rhythm of the seasons, weather and life of the lighthouse keeper.  Each plainly written sentence contributes to poetic paragraphs which bring us back to the lighthouse keeper writing in his logbook. The logbook is the constant refrain.  In between these paragraphs Sophie talks about what is going on outside the walls of the lighthouse describing the time of day, the weather and the season.  Each of these ends with

Here is a passage.

The keeper looks through his telescope.
The tender arrives, bringing oil and flour
and pork and beans . . .
. . . and his wife.

He shows her around
the round rooms
of their house.
He tends the light
and writes in the logbook
and sets the table for two.


When you hold this book in your hands, the trim size, taller and less wide than most picture books, replicates the essence of a lighthouse.  Upon opening the dust jacket (I am working with an F & G generously supplied by the publisher.), the sea scene of water extending to the horizon is mirrored on either side of the spine.  The waves roll and wrap around the rocky base of the lighthouse on each side.  On the front the keeper stands stalwart as the light extends from either side.

To the left, on the back, we are brought a bit closer to the lighthouse.  A cut-away view shows us the storage tanks beneath the first floor, the entrance with the beginning of the spiral staircase, the storage room, the kitchen, the bedroom, a small study and the light at the top.  These seven views give us a greater perspective on how the keeper and his family lived.

The opening and closing endpapers resemble a logbook.  On the first is a photograph of the lighthouse keeper and his bride, a sketch of a ship, a whale tail stitched on fabric, a portion of a letter written to his wife, a spoil of thread and a fountain pen.  The closing endpapers feature a discussion by Sophie Blackall about lighthouses and this book.

Spanning two pages, the verso and title pages feature a view of the lighthouse from the point of view of a bird.  It sits in the upper, right-hand corner with the ship circling around it.  All the water appears to swirl around the lighthouse in a delicate pattern of water and waves.

Rendered in Chinese ink and watercolor on hot press paper each page turn reveals another breathtaking larger image or a combination of a single illustration with smaller pictures opposite it.  The smaller visuals are framed in lines (ropes) used on water vessels.  Sometimes these smaller pictures will be placed within a larger image.

When Sophie's narrative speaks of the lighthouse keeper smaller images within those circles are used.  When she talks about the exterior of the lighthouse and its surroundings, the picture extends page edge to page edge over two pages.  There are two worthy exceptions to this pictorial rhythm.  They are of the wife pacing in the lighthouse ready to give birth and a close-up of the wife, and husband holding his newborn child.  Both of these are double-page illustrations.

With that being said at the close of the title, Sophie gives readers another stunning gift in the form of a gatefold.  This leads us to her final image.  It is the quintessential close to an utterly breathtaking book.

The exquisite fine lines drawn and painted bring a delicate mastery to every single one of the illustrations.  Readers will pause and study the individual elements.  They will notice the handwritten letters rolled into bottles and tossed into the sea, the lighthouse calendar hanging on the wall, the patterns in the wife's dresses, the rug on the floor, and the quilt on the bed.

One of my many, many favorite illustrations spans two pages.  It is the picture of the wife and her husband, the keeper, after the birth of their child.  Along the top half of the image the wife is lying beneath a quilt patterned in circles pieced together with twelve triangles of fabric.  Her head, resting on a pillow, is turned toward her husband seated next to the bed.  He holds their child in the crook of his left arm.  With his right hand he is noting the birth of their child in the logbook resting on his legs.  His feet are stretched out on the circular rug.  An oil lamp glows on the small table next to him.  The point of view is as if we are looking down on them.


No matter how many times you read this title, you will find the beauty of the words and illustrations lingering long after the book is closed.  Hello Lighthouse written and illustrated by Sophie Blackall is a wondrous work, a true masterpiece.  I highly recommend this title for both you professional and personal collections.  You might want to visit the United States Lighthouse Society Lighthouse Facts site.

To learn more about Sophie Blackall and her other work, please follow the link attached to her name to access her website.  Sophie is interviewed at Kirkus about the writing and illustrating of this title.  I know you will enjoy this video chat and the array of interior images shown.
Book Chat with Illustrator: Sophie Blackall from LB School on Vimeo.

UPDATE:  Sophie visits author, reviewer and blogger Julie Danielson's Seven Impossible Things Before Breakfast on April 17, 2018 to talk about her illustrative process and decisions in creating this marvelous title.

UPDATE: Sophie is interviewed by Jennifer Black Reinhardt at PictureBookBuilders on June 12 2018.  It's wonderful and insightful.