Living beings act in surprising ways.  Time and again there will be stories of animals, sometimes enemies, who pair for survival.  People, total opposites, will spend lifetimes together.  Somehow they are able to overlook their differences and find small windows of togetherness. 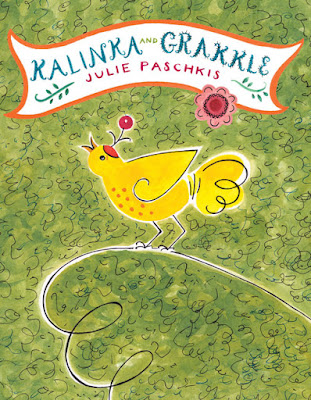 Sometimes those small windows of togetherness open when the two are experiencing their worst moments. Kalinka and Grakkle (Peachtree, April 1, 2018) written and illustrated by Julie Paschkis (Flutter & Hum: Animal Poems, Aleteo y Zumbido: Poemas de Animales Henry Holt and Company, August 18, 2015) is about a decidedly odd couple.  They give new meaning to the word opposites.

Kalinka was a little yellow bird with a neat cap of red feathers.
"I'm such a good bird", she said to herself.
"Good as gold, with a cherry on top."

Her neighbor, Grakkle, was big, green, hairy, cranky and an all-around messy kind of monster.  Kalinka took it upon herself, after flying in Grakkle's open window, to begin to put the chaos in his home in order.  All Grakkle said over and over was:

Eating every single one of Grakkle's cookies except for crumbs was not a good idea.  She picked up his stuff but was clueless as to where it should go.  Putting pencils in a box of spaghetti and mail in a toaster was not wise at all.  You had better believe there was a whole bunch of

being said by a very frustrated monster.

Finally Kalinka did the one thing which sent this monster into a frenzy.  He had a fit.  She ended up in a dire situation.  Her tidiness wouldn't save her now.


On the first page Julie Paschkis clearly defines the two characters in appearance and demeanor.  Before you even turn to the next page, you know there will be tension.  What you do not know is Kalinka will misunderstand every single one of Grakkle's Grakk! exclamations.  She thinks he's perfectly happy with everything she does.

The narrative blends well with Kalinka's happy chatter and Grakkle's angry mumbles.  This supplies humor and leads us wonderfully to a startling twist.  Here is a passage.

Grakkle swatted at the bag.  He belched and scratched his head in confusion.  His hair stood out every which way.
"This beast's appearance is appalling," said Kalinka.
"Luckily for him, I do have a way with hair."
She perched on his head and got to work.
"Gr-r-r-r-rakk," grumbled Grakkle.
"You're welcome," said Kalinka, tying a bow in his matted hair.


It will be interesting to see what readers believe they are seeing on the opened, matching dust jacket and book case.  What is all that curly green?  Are those the outlines of hands on the right and the left on the spine?  Kalinka is already busy speaking.  To the left, on the back, within a white background (on the green) and gracefully framed in signature Julie Paschkis lines and flowers are words spoken right before Grakkle's temper explodes.

The opening and closing endpapers are a soft white with larger yellow dots. (Grakkle's wallpaper)  On the initial title page Julie includes a dedication and features Kalinka and the hands of Grakkle.  She continues with this design but uses Grakkle's tail as a perch for Kalinka on the formal title page.

Rendered in ink and gouache the illustrations, most of them on two pages, employ delicate lines but also manage to convey Grakkle in all his monster glory.  He is indeed a monster and his home is a mess. His expressions as Kalinka goes about her merry way are a huge signal of events to come.  Julie Paschkis uses lines and dots, flowers and leaves to separate text and wonderful patterns on items in Grakkle's house, even if they are patched.  The inclusion of the black pot-bellied stove with a tea kettle simmering adds a bit of old-world charm.

One of my many favorite illustrations is on a single page.  It shows the kitchen table covered in a beautiful patterned cloth.  Chairs are placed to the left and right.  In the upper right-hand corner a bit of curtain billows out.  Kalinka is perched in the center of the table.  She has nearly finished consuming all of the ginger cookies.  Grakkle wearing his vest and belt and with arms upraised is about to go crazy.  He's horrified and angry at the blissful unawareness of Kalinka.


Kalinka and Grakkle written and illustrated by Julie Paschkis will promote all kinds of discussions about what binds friends together.  Readers will see that sometimes the wrong kind of help can make matters worse.  They will also see that even the grumpiest grump has a soft spot.  This title would be an excellent addition with other odd couple books at story time and of course, books about friendship.  Julie's artwork will endear readers to the characters.

To learn more about Julie Paschkis and her other work, please follow the link attached to her name to access her website.  On the Peachtree blog, here and here, Julie talks about this book. Julie chats about the evolution of this title on the Books Around The Table site.