Being true to yourself is exhilarating and sometimes lonely.  If there is something odd about you that sets you apart from everyone else, it can be tricky to find friends.  There will be times when you wonder if you should conform in order to be less alone.  Yet, giving up those things which make you wonderfully unique brings its own kind of sadness.  It's an age-old mental conflict. 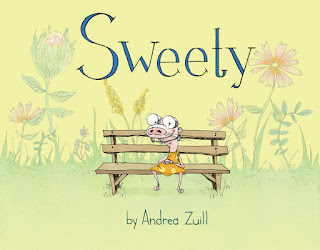 Being a naked mole rat has its own challenges, but Sweety (Schwartz & Wade Books, March 26, 2019) written and illustrated by Andrea Zuill portrays a girl with additional quirks.  Some might say this youngster is hearing an entire symphony rather than only a different drummer.  She (and readers) will come to understand no one is entirely apart from everyone.

Sweety was awkward.
Even for a naked mole rat.

She was referred as a little square peg by her grandmother.  Although the exact definition of this eluded her, she knew she was sometimes an outsider.  Her description of something as simple as her doll when compared to others in her company was too bold and excessive.  No one seemed to share her unusual hobbies.  And how many students do you know who gave a book report

Yes, Sweety was no ordinary naked mole rat.  She did wish to be like others, but she also enjoyed being herself, too.  When her Aunt Ruth, her mother's sister, came for visits, Sweety felt the best.  These two were like the proverbial peas in a pod.

During her last visit Aunt Ruth told Sweety about being a little square peg.  She encouraged her to hold tightly to those things making her a special individual.  She also spoke about finding like-minded people.  This gave Sweety a whole bunch of new thoughts to ponder.

If there were people like her out in the world, she needed to recognize them.  How would she do this?  Some of her ideas bordered on extreme, other plans were more conventional.  It's when she decided on the best course to follow that the desired but unexpected happened.


There is something delightful about naming a naked mole rat Sweety.  In doing this author Andrea Zuill has our immediate attention.  Her blend of conversational narrative with supporting dialogue makes further connections and adds considerable humor to the story.  While we are smiling and sometimes laughing, we are also understanding Sweety and her need to stay exactly the way she is.  Here is a passage.

And most people found her
hobbies a bit bizarre.

Would you like to
come over to my house
and help me identify
fungi?


I don't know about you, but seeing Sweety on the open and matching dust jacket and book case calmly seated on a bench among flowers on the front makes me grin . . . a lot.  Those glasses with the thick lens and braces on her teeth set her apart quickly, but we also see a person . . .er . . .naked mole rat with a great deal of self-confidence.  To the left, on the back, on a lighter canvas an image from the interior of the book shows Sweety loudly proclaiming through a bull horn her virtues to another naked mole rat in hopes of finding someone like her.

A deep golden brown covers the beginning endpapers and the color used in the title text covers the closing endpapers.  On the title page beneath the text Sweety is seated underneath and next to lovely blue mushrooms with yellow flecks.  She is reading a book.

Rendered in pen-and-ink, scanned and colored digitally the illustrations by Andrea Zuill are highly detailed and animated.  On the first two-page picture she has an aside in parenthesis about naked mole rats, their lack of fur and their love of clothes.  Her image sizes vary according to the story and pacing.

Her characters tend to be in bolder brighter colors set against a softer background.  (You can see this on the front of the jacket and case and throughout the title.)  Elements in visuals pay tribute to those things naked mole rats and Sweety enjoy; a chart of root vegetables in the underground classroom and a mushroom lamp in Sweety's bedroom.  Facial expressions and body positions depict emotional moments but like the text also lend themselves to comedy.

One of my many favorite illustrations is a double-page pictures.  We are underground in Sweety's classroom.  Near the center of the picture her teacher is seated at her desk in front of a blackboard.  To her right is the tunnel used as an entrance and exit.  To the right of this is a set of bookshelves.  Sweety is to the left of her teacher clothed in a purple one-piece suit, eyes closed and dancing with a pointed toe and arms flexed a la Martha Graham.  Four classmates are seated at desks along the bottom of the two pages.  One is asking about what book Sweety has read.


This is a book for those who embrace life with a difference and for those who do not.  It helps the first group to stay the course and to not feel alone and reminds the second set of people everyone is valuable.  Sweety written and illustrated by Andrea Zuill is a title you will want to have on your professional bookshelves and in your personal collection too.  We all need reminding every now and then that different is superb.

To learn more about Andrea Zuill and her other work, please follow the link attached to her name to access her website.  Andrea Zuill has an account on Twitter.  At the publisher's website you can view the first few interior images.  On KPBS Andrea Zuill chats about this book.  Author, reviewer and blogger Julie Danielson features Andrea Zuill and this title at Seven Impossible Things Before Breakfast.
Posted by Xena's Mom at 12:30 AM