Imagination On The Run

Some go through their entire childhood without one.  Parents and parental figures have any number of excuses or as they say, truth-filled reasonable replies.  It stands to reason in this timeless conflict, over thousands of years, there is a trail of squashed dreams held by younger gals and guys.  They have all wanted a pet; for many of them, specifically a puppy. 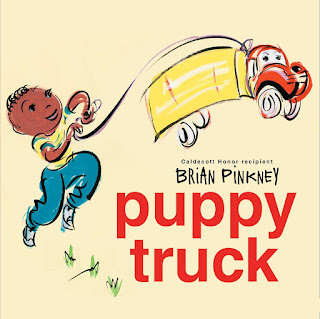 Rather than succumb to disappointment, there are special sorts of souls who have ignited their imaginations.  Puppy Truck (Atheneum Books For Young Readers, June 25, 2019) written and illustrated by Brian Pinkney follows a young boy whose mind bridges the gap between hoping and having.  It's exuberant optimism.

Carter did not get a puppy.  Carter received a truck.  He decided to make the best of the situation, put a leash on this truck and gave it some loving pats.  As they started to move it sounded like a combination of a truck and a puppy.

An impish gray squirrel darted next to the truck on their way to the park.  The truck roared to the challenge.  Carter yelled.  The truck raced right out of the leash.  It was gone!

Fortunately, a girl at the park stood on a bench and sighted the puppy truck.  There is nothing sweeter than a child reunited with their new best friend.  For the rest of the day, that truck carried that boy and together they pursued that troublesome squirrel, delighting in the chase.

Covered in dirt, they both splashed in the sudsy bathtub at home.  Inseparable they snacked and then snoozed. At the sand box the next day in the park, Carter and his puppy truck encountered a friendly surprise.


Using concise, precise words designed for the youngest readers Brian Pinkney presents a problem in the first two sentences and with the glass-is-half-full outlook prevalent in children, Carter has a solution in the third sentence.  This is instantly appealing.  When you add the sound effects, it's an open invitation to join the story.

It's interesting when Carter decides to abandon using the leash how the shared enjoyment increases.  Readers will appreciate the "truckish" language used in the narrative.  Here is a passage.

They were so hungry,
they ate some nuts and bolts.


The choice to work with primary colors against the pale yellow canvas on the open and matching dust jacket and book case (and throughout the book) draws readers' attention quickly to Carter and his puppy truck.  Brian Pinkney's signature movements are present; the joyful upward flow of elements.  Carter's smile tells a story itself.

To the left, on the back, beneath the words

Carter is kneeling on the back of Puppy Truck as they speed down a hill.  You couldn't ask for two happier pals.  On the opening and closing endpapers Brian Pinkney extends his story.  On the first, over the grassy landscape dotted with clumps of green, the gray squirrel scampers toward the right edge.  For a split second, on the closing endpapers the gray squirrel is sitting upright, resting before it's off to tantalize some new unsuspecting being.

Rendered in acrylic and India ink on Canson paper the illustrations are bold and bright filling much of the page with the child and his pet.  Carter is brimming with energy; ready to greet the day and so is his puppy truck.  Many of the pictures span two pages to show this exhilaration these two feel in each other's company as they embrace every moment totally.  There is not a picture in this entire book that is not emotionally charged.  Every line and brush stroke are fluid and free.

One of my many, many favorite illustrations is a two-page picture.  On the pale yellow background, a big sandbox covers a large area along the bottom.  Sitting on the left is Carter.  His legs are moving, and his hands are raised.  He is laughing. (You'll almost be able to hear it.)  Near him and moving across the gutter is Puppy Truck.  It's gleefully saying

Briefly seated on the far right is the gray squirrel looking astonished at not being followed.


The pure bliss in Puppy Truck written and illustrated by Brian Pinkney is certain to lift your spirits and surround you in happiness.  The fact this child is able to use his imagination to make his dream a realization is the best kind of story.  You could pair this book with A Pet for Petunia, The Pet Project or The Grumpy Pets, and Some Pets for a storytime extravaganza on pets.  This is a charming title to add to your professional and personal collections for your younger gals and guys.

To learn more about Brian Pinkney and his other work, please follow the link attached to his name to access his website.  At the publisher's website you can view several interior images.
Posted by Xena's Mom at 11:41 AM