When you get to the conclusion of a book and wonder what happened, you know you have to read it again immediately and then again and maybe one more time.  You wonder if you need to separate what's perceived as real from what might be pure imagination.  You search for veracity. With these repeated readings you can form your own opinions. You believe what you want to believe and what you need to believe. 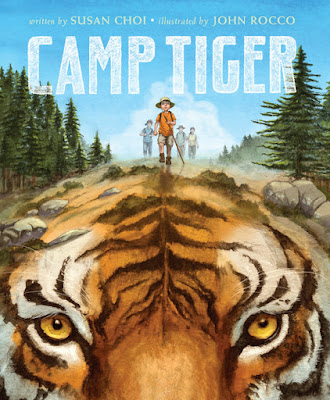 With books like this even after having formed a viewpoint, later it may shift as you bring new experiences to the reading of it.  Camp Tiger (G. P. Putnam's Sons, an imprint of Penguin Random House LLC, May 21, 2019) written by Susan Choi with illustrations by John Rocco is a title with spellbinding words and illustrations.  It is in a word, unforgettable.

Every year, my mom and dad and brother and I go camping at Mountain Pond.

It's a lengthy journey off the beaten path, ending on a road that's more rock than road until Mountain Pond, water between tree-covered mountains, appears.  The family camps at the far end of the pond.  They are alone here as school will start in September when they return home from this trip.  The narrator is not excited about beginning first grade.

As they unload their gear from the car to set up the site, the family talks about the things they are apt to see.  During the setting up of a tent, the mother freezes.  Her family does, too.  A tiger walks out of the woods.  He's big, but not too big.  He's thin.  He talks!

He asks if they have a spare tent; his cave is cold.  When they have it erected, the youngest boy unzips it.  The tiger enters first and he follows him inside.  When he asks his mother to zip them inside, she tells him to do it himself.  She's been doing that more lately.  The child snuggles against the tiger as they chat.

During their two-day stay the tiger shares in their activities.  On the last night the tiger accompanies the boy to look for shooting stars; just the two of them in the canoe on the pond.  The next morning, an emotion threatens to overshadow the joy of the weekend for the narrator.  Arriving home before bedtime, a memory is preserved.

Award-winning author of books for adults, Susan Choi has written an enchanting story of the last lingering moments of summer and a treasured childhood age.  Her descriptions of place, family and being on the cusp of change are an exquisite blend of first-person narrative and dialogue.  These initial descriptions of the ordinary make the appearance of the tiger extraordinary and perfectly natural at the same time.  When humor finds its way into the tale, we willingly laugh with the family.  Here is a passage.

Inside the tent, the tiger lies down so he's shaped
like a C and puts his head on his paws.  I wrap my arms
around him and bury my face in his fur.  He smells like
sunshine and pine needles.

Accomplished artist John Rocco renders images so beautiful you'll have to remind yourself to breathe.  He begins with the illustrations on the open and matching dust jacket and book case.  By blending the partial face of the tiger into the landscape, the imagery is magnificent.  The title text looks to be formed from the clouds billowing up between the two sides of the forest.  The family with our narrator in the lead is striding into a memorable end-of-summer adventure.

An interior picture is used for the back on the other side of the spine.  The families red SUV carrying their red canoe looks small on the rocky road along Mountain Pond.  The pond is indeed like a mirror between the forested mountains.

On the opening and closing endpapers in shades of darker forest green, items taken on a camping trip are spread across two pages.  Some of them are cast iron pans, silverware, a fishing net, a fishing lure, sleeping bags, tents in bags, fishing rods, canoe paddles, a lantern, a utility knife, a first aid kit, a compass, an axe, a flashlight, a canteen, matches, hiking boots, a rope, binoculars and a backpack.  Curling up from the bottom of the center of the right-hand side is the tiger's tale, bright orange with black stripes.  It is an astonishing contrast.

The illustrations are rendered

using a watercolor sketch and wash pencil and then adding the color digitally.

On the initial title page, camping gear is placed beneath the text.  On the verso and title pages a cityscape on the left, with clouds layered like whipped cream behind it, leads to mountains on the right.  Along the bottom a road is empty except for the family's red car, lights shining in the early morning.  Several small horizontal visuals on a single page highlight the journey to Mountain Pond which is given a full-page picture.

In another part of the story, four pictures, two to a page, wordlessly convey what can only be defined as magical. John Rocco shifts his illustration sizes to accentuate the story but also to elevate it.  Double-page pictures add drama as does the use of liberal white space in other images.  The details, the use of light and shadow and the altered perspectives ask you to pause on every page.  And you do . . . with great respect and awe.

One of my many, many favorite illustrations is for the text previously noted. Across two pages, inside the blue tent, shown with a textured and faint-light splashed background, are the tiger and the younger boy.  The tiger is curled in the C shape nearly from one edge to the other.  The boy hugging the tiger is cozily shaped within the C.  Both of their eyes are open.  By the expressions on their faces, they are content and comfortable in each other's company.

After you've read this book once, twice and at least a third time, you'll long for a camping trip like this one.  Camp Tiger written by Susan Choi with illustrations by John Rocco is sheer wonder in words and illustrations.  You'll want to share it often with as many people as you can.  I highly recommend this title for your personal and professional collections.

To learn more about Susan Choi and John Rocco and their other work, please access their websites by following the links attached to their names.  Susan Choi has accounts on Facebook and Instagram.  John Rocco has accounts on Instagram and Twitter.  At the publisher's website and on John Rocco's website you can view a few interior images.  At Picturebooking with Nick Patton John Rocco talks about this book in a podcast.
Posted by Xena's Mom at 11:54 PM