Striving to make a dream come true takes dedication, determination, desire and a great deal of practice.  Given the chance to exhibit the results of your endeavors is exciting.  When other members of your family with the same interests are a part of the event, your eagerness is magnified. 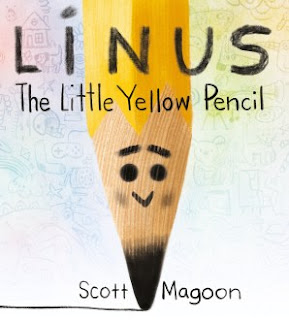 You would think that an individual close to you (really close to you), would be supportive.  In fact, you should be able to count on them as your most ardent cheerleader.  Linus The Little Yellow Pencil (Disney Hyperion, June 4, 2019) written and illustrated by Scott Magoon follows the creative ups and downs of an artist with a pessimistic critic.  It's not easy to stay on point in those kinds of conditions.

The family art show was coming up, and only the art with the most heart would win the grand prize.

Linus, the little yellow pencil, is entering the contest for the first time.  Ernie is Linus's eraser.  He has a hard time finding anything good to say about Linus's drawing.  Ernie is first worried and then very angry.  Linus, in his opinion, has no talent.

Every dot, line and object Linus draws are erased by Ernie.  Now Linus has nothing for the contest.  He watches his family preparing for the exhibition.  Brush is happily painting as Ink, Red Paint and Orange Paint comment.  Linus is a tad bit jealous.  Pen and Crayons are passionately pursing their entries.

Ernie's lack of confidence in Linus seeps into his psyche.  His happy-go-lucky spirit is fading.  When Ernie suggests they not go to the show, it is heart-breaking.  Both Linus and Ernie are starting to wonder if each other are right.  With nowhere left to go, Linus enters a nearby cave.

Inside the cave, Linus meets a being who has a distinct kinship with him.  During their conversation woes are expressed and advice is given.  Popping out of the cave, Linus is a changed little yellow pencil,

he works with renewed vigor until an idea pops into his mind.  It's a concept with a collaborative twist.  The evening of the family art show is one everyone will remember.

Using carefully constructed simple sentences with a mix of dialogue and characters' thoughts, Scott Magoon writes a story mirroring situations and emotions in which readers will identify.  He clearly portrays the battle between loving what you do and being brave enough to keep doing it.  Readers will appreciate the wordplay within the narrative; especially the double meanings.  Here is a passage plus a little bit more.

But it was no use.

When readers look at the smiling face of Linus on the front of the dust jacket, it is their understanding this little yellow pencil enjoys what he does.  Every portion of this illustration is lifelike, asking us to reach out and touch the page.  We can see texture, but the text is raised so we can feel it, too.  You can see faint images used as a background.  These are Linus's drawings.

It is when the dust jacket is opened the other end of this pencil comes into view on the back, to the left.  It is cranky, doubting Ernie, enlarged just like Linus.  The line drawn by Linus is being erased.  Eraser bits fall to the left of Ernie.  The text on the back reads:

What
will
draw
them
together?

A yellow post-it-note in the lower, left-hand corner shows a zebra sketch.  The ISBN covers most of the zebra's body.  (Clever, Scott Magoon, clever)

From left to right and crossing the spine are small colored squares on the book case.  Some are in rows; others are placed on top of these loose rows.  Inside the squares are examples of artwork after Linus's idea grew in his mind.  In the lower, right-hand corner on the front the title has been written in a yellow square.

On the opening endpapers a large drawn squiggle moves from left to right, nearly top to bottom, on a yellow canvas.  In black and white on the closing endpapers a burst of artwork in rays shines from the upper, right-hand corner to the far-left side.  This is a glorious example of Linus's grand design.

Using scanned paper texture and Photoshop Scott Magoon's illustrations are a marvelous medley of characters and artistic styles.  Items found in artist's studios and on their tables are brought to life with dots and lines and ingenuity.  Drawing notebooks and a worktable provide a canvas for the papers and artwork.  The depiction of Linus in the cave is superb.  (Look at Ernie's face!)

The picture sizes are nearly all double-page visuals.  The perspective shifts in sync with the narrative.  Emotion is embedded in every single one.  These tools of the artists' trade are fully animated expressing and experiencing human qualities.

One of my many, many favorite illustrations is on a single page.  It highlights a good portion of the text previously noted.  On a plain creamy yellow background, Linus has drawn a stick figure in the lower, left-hand corner.  There is a grassy area at the bottom with lines rising from the ground.  A stick is standing in the middle of this area.  Three branches with leaves extend from the stick.  A smiling face is in the center with an eye and eyebrow on either side and a smile curving underneath.  Ernie is erasing the grassy area on the right.  Linus is trying to draw a swirling line, but he is clearly unhappy.

Like the winner of the art show, this book, Linus The Little Yellow Pencil written and illustrated by Scott Magoon, has the most heart.  It's not only about following your heart but also about helping someone else to see the art in their heart.  It's a hopeful, lively look at staying true to your calling but to be willing and brave enough to change.  I highly recommend this title for your professional and personal collections. (The dedication is simply lovely.)

To learn more about Scott Magoon and his other work, please follow the link attached to his name to access his website.  He has a great deal of information and resources about this title.  Scott has accounts on Instagram and Twitter.  Scott Magoon is interviewed at Creative North Shore, The Write Space and Critter Lit.