A big change in the weather sends out signals.  The wind knows.  The clouds know.  All the animals know.  Access to the latest forecast is not always readily available, so if humans look at the wind, clouds and animals, they know, too. 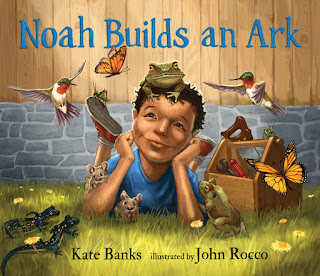 For some storms planning and doing are essential for survival.  Noah Builds an Ark (Candlewick Press, March 12, 2019) written by Kate Banks (Pup and Bear) with illustrations by John Rocco (Blizzard) follows a family as each member prepares for days of wild weather. One member realizes the planning and doing needs to be extended beyond their house.

Noah spied it coming from afar.  It started with a cloud peeping over the hill like a curious ghost.  A storm was on the way.

As his father went to gather tools and materials to make their home storm ready, Noah was watching salamanders, beetles, mice and ants in their back yard.  They felt the change in the air.  Noah decided to get his wagon and his tools to make something storm ready for these creatures.

Noah took off the wagon's wheels.  He attached sides and a roof to the wagon. He built a ramp and a secure door.  Noah made an ark for his animal friends.  Inside their home, Noah's mother and sister were getting food and water prepared for his family.  Noah did the same for the animals.

Knowing they were going to have no electricity, Noah's mother got candles and matches.  Noah secured a flashlight to the inside of the ark.  When he was called inside to safety, Noah asked the animals to come to the ark.  And they did.  Noah pledged to set them free when the storm passed.

As the storm raged, humans inside Noah's home huddled.  Inside Noah's ark, the animals huddled.  Each group, humans and animals, did what living beings have done for centuries, they passed the time with food, water, shelter and each other until exhausted they slept.  The storm angrily lasted for four days and four nights.  What of Noah?  What of the creatures on the ark?  A promise is made.  A promise is fulfilled.


A story of compassion unfolds through the beautiful language penned by Kate Banks.  Her descriptions of setting using simile are vivid.  In presenting the animals each verb matches their characteristics.  She creates a pattern between what the humans are doing in preparation and what Noah is doing for the animals.  She continues this by telling us what each group does during the storm.  It's a gentle comparison showing a connection between all living beings.  Within the narrative, making it more personal for readers, dialogue is placed, adding to the flow of the story.  Here is a passage.

Noah hurried into the house to watch and wait.  Suddenly the sun snapped
off its light.  A curtain of darkness drew across the sky.  The rain tiptoed at
first, pitter-patter, pitter-patter. And the wind whooshed and shooshed.
Then there was a silence so grand you could hear a tear drop.


One of the first things you notice when looking at the front of the dust jacket is the look of pure contentment on the face of Noah.  The animals gathered around him sense his affection for them based upon their closeness.  You expect this scene to quietly come alive.  One of the other things you notice is the placement of light and shadow.  This image glows.

To the left, on the back, on the other side of the spine, the fencing and stone wall continue.  On the far left is a flowering bush.  On the dandelion spotted grass rests the completed ark, waiting for voyagers.  The book case is an entirely different scene, more shadows than light, spanning from left to right.  We are peering inside the ark during the storm as rain pelts from the sky.  Hummingbirds, toads, a grasshopper, beetle, spider, mice, a snake and a salamander are waiting in the dimness.

A burnt orange covers the opening and closing endpapers.  For the initial and formal title pages John Rocco begins with a bird's eye view of buildings and back yards.  A single bird is swooping over the area.  With a page turn two birds fly over the roofs as the double-page picture unfolds in front of us.  Each illustration, in pencil and watercolor and rendered digitally, is either a two-page picture, a full-page visual or a smaller image(s) surrounded by white space.  The size of the illustrations enhance the story's pacing.

Careful readers will notice how John Rocco carries details from one illustration to the next illustration; the birds land in Noah's back yard, one next to him and the other in a bird bath.  How many pictures feature the grasshopper companion Noah speaks to?  For emphasis the point of view shifts bringing us deeper into the lives of Noah and his family and the lives of the animals.

One of my many favorite illustrations is on a single page.  Noah has just completed the ark.  He is kneeling in the grass between the stone wall and the ark.  It's the expression on his face which is most striking.  You wonder what he might be thinking.  It would make for an interesting conversation.


There are those who have a kinship with animals unlike others.  The animals know who these people are.  This boy is one of them.  Noah Builds an Ark written by Kate Banks with illustrations by John Rocco is a tender story of a child who considers those lesser than himself.  It is a story of stewardship.  It is a story of compassion.  I recommend this title for your professional and personal collections.

To discover more about Kate Banks and John Rocco and their other work, please follow the links attached to their names to access their websites.  Kate Banks has an account on Twitter.  John Rocco has accounts on Instagram and Twitter.  At the publisher's website you can view an interior image.  There are other illustrations at Penguin Random House.
Posted by Xena's Mom at 12:30 AM