Copies disappeared with regularity.  Others were ragged and torn and patched until they had to be replaced . . . repeatedly.  These books located in the nonfiction section, Dewey number 793.73, were rarely on the shelves except at the beginning and end of the school year.  Their popularity never ceased. 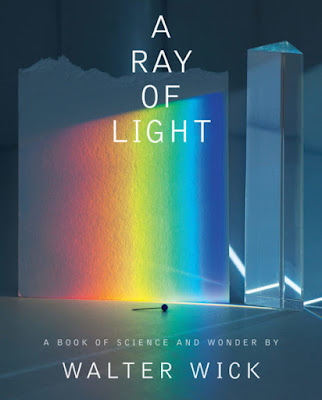 Series like the classic I Spy books, Can You See What I See volumes and the stand alone title, A Drop of Water: A Book of Science and Wonder (546.22) have entertained and informed readers for decades.  A Ray Of Light: A Book Of Science And Wonder (Scholastic Press, February 26, 2019) written and illustrated by Walter Wick is a breathtaking depiction through photography and text of various aspects of light.  It's one of those titles where there's much you aren't aware you don't know but are grateful you do now.

Everything from the earth beneath our feet, the water we drink, and the air we breathe is made of atoms.  Atoms are the tiny, invisible building blocks of matter.

From an introductory paragraph on atoms and matter, we move into a grand discussion of light and its purpose and place in the world.  In fifteen sections, each beginning with a page turn, we are privy to wondrous revelations.  In the first one, light is shown to be energy through its presence in a flame.

Light generated through heat is incandescence.  Did you know depending on the heat source, the color of this kind of light changes?  According to the length of light's waves we see different colors; red is longer than blue.  Guess what happens when red, green and blue light overlap?

Light refraction is presented as an obstacle course.  The colors in a color spectrum cannot be refracted again through a prism. (Did you know that?)  You will be amazed at the difference in two, three-color combinations when they are spun like tops.  The explanation for iridescence is equally engaging.

We are presented with a comparison of pigments and dyes and how they are formed.  The use of a lens can be powerful in creating energy or in projecting an image on another surface, like our eyes and in cameras.  Extending the discussion on the use of lens we understand how they work in microscopes and telescopes.  As the title comes to a close we find ourselves leaving our planet, comparing it to the moon and traveling to the sun.  Light is life.


Every explanation offered by Walter Wick in his text is concise but conversational.  He starts with the simple moving to the more complex but never loses the reader in too much detail.  Each topic moves to the next in a flawless flow.  Specific words are italicized, reinforcing our understanding of their clarification.  Readers feel as though they are being given a personal tutorial.  Here is a passage.

Unless obstructed or reflected, light travels in perfectly straight lines.  Above, a ray of sunlight comes in straight from the left.  Encountering a clear, water-filled box head on, the light remains perfectly straight as it passes through.  Arriving at the next box at an angle, the light bends down slightly, then bends up again continuing on a straight path.  The bending of light rays by plastic, glass, water, or any other clear substance is called refraction.


One can only speculate on the time-consuming task of taking each and every photograph displayed in this book.  On the open and matching dust jacket and book case we first encounter, on the front, a prism presenting the color spectrum.  Note the pin in the picture.  Walter Wick uses this object frequently to make comparisons.  To the left, on the back, a square outlined in a thin line of white is broken equally into four other squares outlined in white.  These hold portions of images shown in the interior of the book representing light as energy, incandescence, refraction and tricks of light.

A soft, steely blue covers the opening and closing endpapers.  On the title page the text uses the color spectrum on white; the opposite of what we see on the front of the jacket and case.  For the subjects covered in the body of the book, photographs range in size from double-page pictures to full-page illustrations to a series of smaller visuals demonstrating a scientific point.  For example, when showing us how light is energy, three small images show a match about to be drawn across a rock, then as it moves, it burst into a flame and finally, the burning match is held above the rock.

The text and these photographs work wonderfully together.  The photographs elevate the text splendidly appealing to more visual learners but benefiting verbal (written) learners at the same time.  It's as if we are holding experiments in our hands which we can refer back to again and again which is exactly what Walter Wick desires for us.

One of my many favorite photographs is a series of six images.  The top three show a ball connected to a rod.  These depending on the speed visualize the wavelengths of light.  Beneath these are corresponding colors of light; red, green and blue.


A Ray Of Light: A Book Of Science And Wonder written and illustrated by Walter Wick fully explains the science behind every aspect of light but it still seems magical.  It is guaranteed readers will find this book captivating from beginning to end.  At the close of the book two pages are dedicated to further information about each topic along with Spectrum of Electromagnetic Radiation.  Walter Wick closes with a chat about the process behind this book.  I highly recommend this title for your personal and professional collections.

To learn more about Walter Wick and his other work, please follow the link attached to his name to access his website.  He includes two page spreads from the interior of the book.  Walter Wick has accounts on Instagram, Pinterest and Twitter.  At the publisher's website you can view more interior pages.  You must go to Scholastic's blog to read and see the process behind the making of this book.  It's fabulous!  At The Horn Book Roger Sutton talks with Walter Wick about this book.  Here is a link to a video on Facebook about this title.  Please take a few moments to watch this video with Walter Wick talking about this new title.


Be sure to visit Kid Lit Frenzy hosted by educator Alyson Beecher to enjoy the other selections this week by those participating in the 2019 Nonfiction Picture Book Challenge. 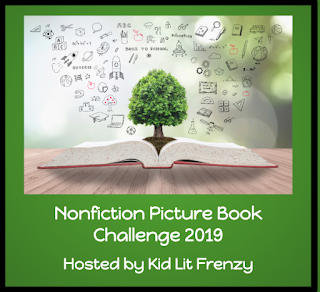