There is absolutely no way to stop it. It arrives every year on the same day at the same time and it leaves not a second earlier or later than it should.  A lot of individuals can hardly wait for the date.  A few choose to ignore it 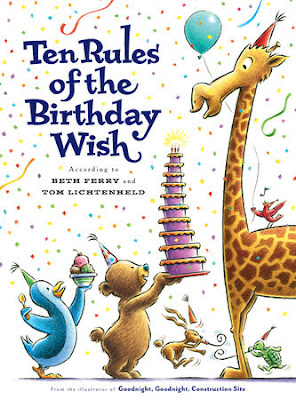 In some households it is a cause for a special event.  It's a time to honor the celebrant. There might be a party.  There might be games.  There might be special food. And there might be gifts.  Ten Rules of the Birthday Wish (G. P. Putnam's Sons, February 12, 2019) written by Beth Ferry with illustrations by Tom Lichtenheld focuses on one of the most significant elements of observing a birthday.

There are,
there most definitely are,
10
very specific, tried and true,
and absolutely essential
Rules For The Making of
a Birthday Wish.

You may think rule number one is stating the obvious but there are some beings who think as long as they blow out birthday candles, they can make a wish.  If it's not actually the date of your birthday or close to it, this is a fruitless endeavor.  To ensure the validity of your wish a party is essential; a party with hats.

A form of light to extinguish is imperative.  Did you know you have to close your eyes when you wish?  Do you know why?  Before eliminating the light, usually candles, most will inhale deeply.  If you don't rule number nine will certainly be impossible.  There is an exception to this rule . . . for camels.  The justification makes perfect sense for sanitary reasons.

There are those who don't follow rule number ten.  Sometimes it's in error.  If this happens, you'll have to hold your wish in your heart until next year.


This is no ordinary list of regulations for those commemorating their special day.  Beth Ferry adds commentary for most of the wishes guaranteeing readers will be grinning from ear to ear in mere minutes.  She gives us an opportunity to ponder exceptions to these birthday wish rules.  What if your life span is less than a year?  Are balloons always a good party accessory? (What if you are a swordfish?)  What kind of wish is acceptable?  Here is a portion from rule number four.

If you are a frog, consider using
fireflies as your candles AND
your dessert.  Combining rules is
completely acceptable.


Rendered in pencil, watercolor, colored pencil, and pastel by Tom Lichtenheld, the illustrations beginning on the matching dust jacket and book case certainly put loads of happiness in this book about birthday wishes.  All the characters are highly animated and smiling or laughing.  The white canvas is ideal for showcasing the brightly colored animals and party items.

To the left, on the back, those creatures shown on the front are now seated around a circular table with the towering cake waiting for someone to make a wish.  On the opening and closing endpapers a royal blue and a light blue create a pattern comprised of streamers, confetti, balloons, party whistles, crowns, food and desserts, especially a piece of cake.  An enthusiastic group is featured on the verso and title pages.  A large purple elephant is joined by three rabbits, a duck and a little bear.  Everyone is wearing party hats.  Tiny print along the elephant's back reads:

Balloons are highly recommended.  Inflation by pachyderm is optional.

Background colors shift according to the subjects shown.  Some of the images span two pages and others are on single pages.  The expressions on the animals are delightful!  Certain animals travel from one portion of the book to another portion.

One of my many favorite illustrations is for rule number five.  This rules begins with
There must be singing.  On a grassy hill arching from the left side to the right side are six dogs of varying species.  Five have their eyes closed and heads lifted to howl a song for their friend.  The friend sits just right of the gutter, holding the string attached to a red balloon in its mouth.  In front of this pooch is a cake with three candles glowing.  A bone with a ribbon around it rests in the grass. 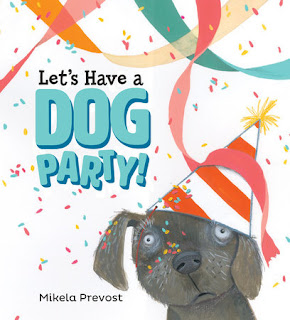 This noted illustration leads splendidly into the next title to be highlighted.  If you recall, not every single soul enjoys a certain kind of birthday bash.  Let's Have a Dog Party! (Viking, March 19, 2019) written and illustrated by Mikela Prevost gives readers a look at how a human learns to listen to her canine companion.

This is Frank's spot.

It's his favorite spot
in Kate's house.
More than his bed,
more than his bowl.
Frank's spot is warm
and soft and perfect
for napping.

Before Frank can settle into his perfect napping spot (next to a comfy armchair), Kate and four of her friends, shouting and laughing, run into the room.  They are ready to wish Frank a Happy Birthday.  To get Frank ready for his party, they decorate him with bows, balloons and a party hat.

Everything Frank likes, his bed and his bowl and his spot, are buried under colored wrapping paper, ribbon and tape.  Where is his spot?  It must be here.  One of the children thinks his snooping means he wants to open his presents.  Another uproar ensues.

They sing the Happy Birthday song so loud Frank cringes.  They join hands and dance around Frank.  Frank is frantic.  He leaves as fast as he can.  They think he wants to play hide-and-seek.  He simply wants to hide.

When Kate finally finds Frank, her joyful discovery turns to belated understanding.  Fortunately, the love of a girl for her dog leads to one final birthday surprise which Frank is more than willing to enjoy.  Even though Frank makes no wish, his day ends as if he has.


Throughout this story Mikela Prevost blends the voice of an unseen narrator with the conversations of Kate, his human, and her friends.  This makes the contrast between what Frank desires for his day and what Kate and company are doing even stronger.  It leads beautifully to the big moment of comprehension.  Here is a passage.

And then his bowl.

It had to be under
these things.


Spread across the open and matching dust jacket and book case are signs of a party in progress; the golden balloons on the left, coral and yellow and teal streamers and cascading confetti. You would think the birthday being would be happy but clearly the dog wearing the striped hat is anything but happy.  He's looking decidedly woebegone.  The title and his expression do not match.  Already readers will start to question what will be explored and explained in the body of the book.

On a rich golden background on the opening and closing endpapers are seven party hats in various designs with their strings gently looped near them.  The hats at the close clearly show the efforts of the children.  On the title page a barefoot Kate, carrying three balloons in her right hand, reaches out her left hand to affectionately tap Frank on his nose.  You can tell they adore each other.

Each illustration rendered in watercolor, acrylic gouache, and colored pencils with a bit of collage brings readers into the story through a blend of double-page pictures, single-page images and smaller visuals.  Mikela Prevost alters her perspective to enhance an emotion.  For two of the illustrations the background shifts because of the scene but also because of Frank's distress.  The other technique Mikela employs is to show the mouths of the children wide-open.  They are using outdoor voices inside.  This is crushing to Frank as shown by his body posture.  (For careful readers, Mikela Prevost has inserted a bit of humor made visible on the closing endpapers.  It's very clever.)

One of my many favorite illustrations is a small one, grouped with two other small images.  It's after Kate coaxes Frank from his hiding place.  She is kneeling at his level on her hands and knees.  He comes to her and gives her a doggy kiss on her cheek after she says she is sorry.  It is a time of understanding, forgiveness and love.


Both of these books, Ten Rules of the Birthday Wish written by Beth Ferry with illustrations by Tom Lichtenheld and the debut title, Let's Have a Dog Party!, as both author and illustrator for Mikela Prevost, center on annual anniversaries but each one asks us to ponder completely different points.  For the first one, amid humor, we wonder if there are other rules for making wishes.  In the second one, we are asked to be sensitive to the wishes of someone other than ourselves.  I highly recommend both titles for your professional and personal book collections.