Get It While You Can (Or Not)

What's a father to do when he wishes his lawn would look like a fairway at Pebble Beach in California?  He arms his two daughters with special diggers and their sand buckets for the beach.  Their task is to uproot fifty dandelions each before they can stop.  This goes on during spring and summer, day after day, year after year until they are saved by attending college. 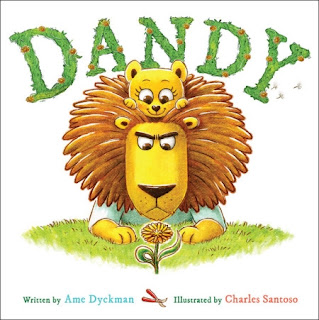 Now you would think after spending your childhood and teen years battling the infamous yellow weeds, as an adult other measures for eliminating the menace would be taken. Nope.  To preserve the quality of water and protect her furry friend, this sister can be seen during spring and summer with digger and bucket in hand.  (Some lessons last a lifetime.)  For this reason, Dandy (Little, Brown And Company, April 1, 2019) written by Ame Dyckman with illustrations by Charles Santoso is a witty and gleeful take on the timeless battle with dandelions and of the enduring love of a father for his daughter.

Daddy spied something scary
on his perfect lawn.

He ran for his clippers.

Daddy was not fast enough.  Sweetie, his precious daughter, was already watering the dandelion.  She named it Charlotte.  Charlotte was her new best friend.  Daddy was worried, very worried, his neighborhood friends would notice the intruder growing in his otherwise flawless lawn.  They noticed.  He had to get rid of it.

As sneaky as a father can be, Daddy tried to slip away undetected during Sweetie's special times like book time and nap time.  Guess who was reading aloud to her best friend?  Guess who set up a tent in the yard next to her best friend?  The neighbors demanded action.  Daddy did his best, but his precious daughter was always there.

Soon Daddy had the ideal opportunity.  Sweetie was leaving for swimming lessons.  Goodbye Charlotte! The neighbors cheered as Daddy raced to eliminate that pesky pest.  WAIT!

Next to the dandelion was something that could not be ignored.  In the next moment an unplanned incident caused panic throughout the neighborhood.  The eternal conflict between consequences and choices must be resolved.  Take a deep breath.


Author Ame Dyckman is an absolute master of comic timing.  In her first sentence she sets us up for the charming and hilarious contrast between Daddy and Sweetie with three words:  scary, perfect and clippers.  He sees a weed.  She sees a flower.  When she names it and says it's her best friend, I dare you not to burst out laughing.

With the continued conversations between Daddy and Sweetie and the comments of the neighborhood dads, the laughter factor continues to climb.  By repeating the utterly endearing greeting of

Ame Dyckman supplies readers with a wonderful cadence and heightens the difference between the perspective of a parent and their child.  Here is a passage.

He tried during snack time.
But Sweetie was there.
"Hi, Daddy!
We saved you a spot!"


[I'm working with an F & G and can't wait to hold a finished copy in my hands.]

On the front of the dust jacket the pristine white background is a superb canvas for the portion of lawn shown, Daddy, Sweetie and the dandelion.  You immediately know there will be laughter because of the different looks on their faces; delight versus disgust.  Using grass and dandelions to form the title text is design genius.  There is a hint at the resolution.  Do you notice the clippers separating the author and illustrator names?

To the left, on the back, Daddy is zooming toward what he hopes is victory in conquering the dastardly dandelion when Sweetie is at her swimming lesson.  I won't say what tactic he's selecting, but it does take lawn tractors to a whole new level.  (Okay, I can't stop laughing . . . again.)

On the opening and closing endpapers illustrator Charles Santoso features a quiet, two-lane street curving through a neighborhood of neat-as-a-pin lawns and landscaping. Animal dads are hard at work maintaining the perfection.  There are distinct differences on the closing endpapers disclosing the conclusion.

Rendered digitally with handmade pencil textures on top these illustrations elevate the comedy sky-high.  One of the first things readers notice are the facial expression on Daddy, Sweetie and the neighbors.  The eyes are brimming with emotion.  The body postures and movements are loaded with animation.

Depending on the narrative Charles Santoso alters his images from double-page pictures to single-page visuals.  To show a series of actions in a short amount of time, he groups several smaller illustrations on a single page.  This builds tension and leads to the inevitable response from Sweetie.  For maximum impact the background and perspective changes.

One of my many, many favorite illustrations is when Daddy is trying to destroy Charlotte during Sweetie's snack time.  After crawling away as she scoops out some chocolate chip cookies, he races into the yard with a goat gobbling up grass.  When he arrives at Charlotte, Sweetie is there.  For this scene Charles switches to a purple background with lines of frustration in yellow zigzagging out from the center.  Daddy is gritting his teeth with his hand to his head.  In his other hand he holds the rope attached to the goat.  The goat is seated next to Sweetie holding a tea cup as Sweetie pours.  Another tea cup for Daddy is placed next to a plate with the cookies on it.  One of Charlotte's leaves is through the handle of another cup.


It is guaranteed readers will ask to read or listen to Dandy written by Ame Dyckman with illustrations by Charles Santoso over and over and over again.  And no matter how many times it is read, they (everyone) will laugh; the combination of text and art connects with readers as it addresses the age-old discrepancies between parents' and children's points of view.  It also reminds us love wins . . . always.  You will want to read the author's note.  I highly recommend this title for your personal and professional book collections.

To learn more about Ame Dyckman and Charles Santoso and their other work, please follow the links attached to their names to access their websites.  Ame Dyckman has an account on Twitter.  Charles Santoso has an account with Instagram, Tumblr and Twitter.  Ame is interviewed at Writers' Rumpus.  Charles is interviewed at Kathleen Temean Writing and Illustrating.
Posted by Xena's Mom at 12:15 AM