When you think of music, you associate specific emotional responses with certain melodies and lyrics.  Did you know 1972 was the first time the word playlist was used?  Now there are playlists for any number of things.  We have songs, lists of songs, which inspire us and bind us together as a nation, a community or best friends. 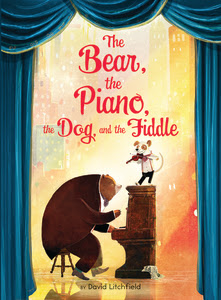 In The Bear and the Piano readers met an extraordinary animal and the music he learned to create on a discovered instrument.  A companion title, The Bear, the Piano, the Dog, and the Fiddle (Clarion Books, Houghton Mifflin Harcourt, March 5, 2019) written and illustrated by David Litchfield takes us down a path on another harmonious journey.  We are reminded there is more than one direction available to realize our deepest desire.

Hector and Hugo were best friends.  Hector was a fiddle player, and Hugo was one of his biggest fans.

Over the years the man and the dog were inseparable regardless of their fortune.  Now, though, it seemed as if no one, except for Hugo, wanted to listen to Hector.  Hector was so discouraged he quit playing the fiddle.  He was letting his dream of playing in a concert hall fade.

Nothing interested the elder man.  Day after day he engaged in sedentary activities.  Hugo, on the other paw, resurrected the fiddle and practiced and played and practiced and played.  One night Hector followed a sound and found Hugo entertaining a crowd from the roof of their apartment building.  Hugo was magnificent! (Hector was a tad bit jealous.)

Knowing how much Hugo loved making music on that fiddle, Hector shared his expertise with his friend.  As you can imagine crowds now gathered in the streets, day after day to hear Hugo.  This attracted the attention of one very special piano-playing bear.  Bear wanted Hugo to be a member of his animal band of musicians.

Hugo was very excited at this prospect.  At first, reluctantly, so was Hector but then he was mean to his friend as he left to go on tour.  Around the world Hugo, the star of the show, went with Bear's Big Band. Everyone could watch them on television or on their computers . . . even Hector.  When Bear's Big Band arrived back at Hector's city, choices were made.  On a remarkable evening bravery, disbelief, compassion and the sound of two fiddles represented the strength of friendship.


As readers we are very clear as to the relationship between Hector and Hugo early in the story.  David Litchfield gives us through his words the power of playing the fiddle on both the man and the dog.  We understand how a career of achievements is still short of a goal.  We understand the deep need to begin making a dream come true.

Through a careful blend of narrative, woofs and body movements, and dialogue we know exactly what Hector and Hugo are thinking. This knowledge brings us deeper into their story.  Here are several passages.

As Hugo looked up at Hector, his tail wagging,
Hector's tummy started to hurt again.  He was jealous.
"I guess you should go," he said, trying to smile.
"It's the opportunity of a lifetime."

Hugo's tail wagged
even more as he packed
to go away with Bear's
Big Band, making
sure the fiddle was
safely stowed.

But Hector began to have second thoughts.
"Don't go and join that silly group, Hugo,"
he said.  "We don't need them."


The elegant, flowing blue curtain framing the dog and the fiddle with Bear playing the piano hints of events to come.  The radiant cityscape in the background gives us a stronger sense of place and time. (Note the crumpled flyer at the bottom of the piano.) To the left, on the back, the blue of the curtain moves over the spine to the far edge.  In the center of this blue canvas is a circular image.  Bear is seated at another piano looking out at the crowd.  Dog is standing on top of this grand piano, bow and fiddle lifted in either paw.  He too is looking out at the audience (readers).

On the book case, on the front, the blue curtain is removed.  As our eyes move left on the open case the buildings cast in a glowing light stand tall.  The flyer is easier to read as it lays on the ground.  In the distance, ever so faintly, we can see members of Bear's Big Band.

On the opening and closing endpapers our view is of the rooftop of Hector's and Hugo's apartment with other rooftops nearby.  A somewhat darker color palette with more prominent shades of red in the cityscape is stretched behind the rooftops. No one is visible on the opening endpaper.  On the closing endpaper it is night.  Everything is cloaked in hues of blue.  Hector and Hugo are playing a fiddle duet on their rooftop.  A light, directed at them, comes from the top left to their nearly center right position.

Rendered in mixed media the illustrations, varying in size from double-page, to full-page to partial page, are highly animated.  It's as if we expect everyone and everything to come to life in an instant.  At one point David Litchfield groups three smaller images on a single page to accentuate pacing and the passage of time.  Hugo is seen honing his fiddle-playing skills in several different seasons.  This same technique of three on one page is used again to supply suspense.  The intricate details in each picture ask readers to pause.  The expressions on the characters' faces ask readers to feel.

One of my many favorite illustrations spans two pages.  In the background are buildings along a city street.  In the foreground on the left and somewhat on the right is a crowd of peoples' faces, from all backgrounds, watching Hector and Hugo.  On the right Hector is instructing and conducting Hugo.  The dog is standing on a small, green, three-legged stool.  One foot is raised as he waits to move the bow over the strings.  The use of light and shadow here (and throughout the book) is marvelous.


It's not hard to imagine hearing the strains of a fiddle playing and the notes from a piano ringing when you read The Bear, the Piano, the Dog, and the Fiddle written and illustrated by David Litchfield.  The threads of friendship and music are distinct and compelling. As a stand-alone title it's wonderful.  As a companion to The Bear and the Piano, it's simply splendid.  You will want a copy in your personal and professional collections.

To learn more about David Litchfield and his other work, please follow the links attached to his names to access his sites.  You will enjoy the interior images from this book at his website.  David Litchfield has accounts on Instagram and Twitter.  David is interviewed at The Children's Writer's Guild.
Posted by Xena's Mom at 1:36 PM