There are two, among many, things of which we can never be sure.  Unless we have the ability to fast forward in time, we are never quite certain how we may favorably influence another contemporary or someone in the future.  We also can't truly imagine the consequences of a seemingly unimportant situation.  Our lives are filled with "what-if" this or that did or did not happen. 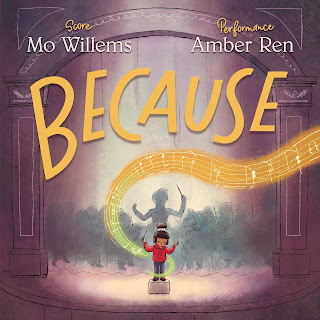 Whether we realize it or not, music surrounds us.  It is in the clicking of a dog's toenails on a hardwood floor, the sound of a spoon stirring in a stainless steel pot, the hum of heat moving through duct work, garden wind chimes ringing in a soft breeze, the crack of melting ice, the hoot of a nearby owl or the howl of a coyote in the distance as darkness gathers.  Composers gather those sounds enveloping our world making their own music, music longing to be heard and played.  BECAUSE (Hyperion Books For Children, March 5, 2019) score by Mo Willems and performance by Amber Ren explores the influence of composers, musicians, symphonic performances and the elements of serendipity and perseverance.

This is how it happened:

Two composers, Ludwig van Beethoven and Franz Schubert, contemporaries, lived in the same city, centuries ago; the former influencing the latter.  Franz's rich and harmonious Symphony no. 8 in B-minor in turn, years and years later, brought a group of musicians together, forming an orchestra.  One member after another were asked to join because of their love of music and their dedication to perfecting the playing of their instruments.

A concert was planned.  Individuals outside the orchestra contributed to the event's success; a poster maker, a train engineer, an orchestra librarian and the musical conductor each assisted.  The score was polished through practice.  Concert hall workers applied finishing touches to the venue and ushers welcomed the audience.

An illness, a cold, resulted in a niece taking her uncle's seat at the concert and that . . . shifted . . . something in the child's soul.  Year after year her interest in music grew.  She studied.  She practiced.  She wrote.  She was heard.

Like those original members of the orchestra who played Franz Schubert's Symphony no 8 in B-minor, she was asked and given an opportunity.  As a tribute to a single unplanned event her notes wove through an audience.  And BECAUSE . . .


Gentle, searching like a lively, uplifting melody, Mo Willems takes a single word using it as a common theme for connecting events and people over centuries, years, months, weeks, days and hours.  Each sentence and phrase begin with Because followed by the actions of individuals pursuing that which they love to do.  Mo Willems also uses two repetitive thoughts to excellent effect creating a full circle.  What will amaze and thrill readers is how these all work to form a series of changes.  Here are two of the sentences.

Because the usher helped the aunt
and her special guest---
they found their seats.

Because everyone was there to hear beautiful music---
it was quiet.


In her debut as a picture book illustrator Amber Ren glows like the lovely refrain of words she enhances.  Using the stage of the concert hall as a focal point on the front of the dust jacket, she alludes to the possibilities, before and after, this single event.  The line of music swirling about the child and off the right edge is a part of nearly all the images within the body of the book, changing in color as the story progresses.  The title text is varnished.

To the left, on the back, beneath the words

BECAUSE . . .
an unexpected note
can change a life.

an interior illustration is placed within a circle.  It's the child after the concert conducting music to an audience of toys.  The darkened color at the edge of the stage supplies a canvas here and on the book case.  Within an elegant gold frame on the front of the book case, the girl writes music, perhaps remembering why she attended the concert that evening.  The music moves to the left and appears again on the other side of the spine weaving upward as another child is caught in its spell.

On the opening and closing endpapers a music stand is placed from left to right.  On each a different musical score has been placed; two pages in length, one on the left and the other on the right.  Around the outside of the opening music stand is a golden yellow.  On the closing endpapers the framing color is a spring green, indicative of the transformation.  On the title page the little girl is featured bowing to an imaginary audience as music winds around her.

Alternating between double-page pictures and single-page visuals Amber Ren takes us on a journey through time.  She presents a variety of diverse people, with different ages and with a common interest---music. Her fine lines are filled with soft hues of color on matte-finished paper.  Readers will be fascinated with her attention to detail; the portrait of Franz on the sick uncle's wall, a large musical staff being used as a bookcase and framed records on a wall.  Careful readers will spot guest appearances by the book's creators.

One of my many favorite pictures is that highlighted on the book case and in the interior of the book.  On a single page we are looking at the child's bedroom.  It's an upper story room with the roof peak making a "v" behind her.  On that wall hangs pictures of her favorite things.  To the right is her keyboard.  On a large oval rug in pale green sitting in a half circle are seven toys, their backs to us.  Eyes closed and an arm raised holding her baton the child presents her music.  From her baton a shining vine extends, traveling over the gutter to the next series of illustrations.


Radiating warmth and creative potential BECAUSE written by Mo Willems with illustrations by Amber Ren is a sensory symphony to treasure.  This is a glorious example of the ripple effect.  We can never know how our lives will alter other lives.  We can never know how a single event can fashion a future.  I highly recommend this title for your personal and professional collections.