Most of us are familiar with the saying be careful what you wish for.  In other words, it's wise to prudently weigh all the consequences attached to our heart's desire.  While we can never anticipate all the possible outcomes, we can at least be prepared for some of them.

In the world of children's literature, a new character has entered the realm.  His greatest desire is for adventure.  In fact, he recently placed an advertisement in The Cityville Times claiming:

All Adventures
considered!
No mystery too big
or too small!
Competitive prices! 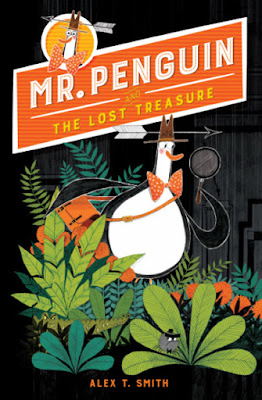 Mr. Penguin And The Lost Treasure (Peachtree, April 1, 2019) written and illustrated by Alex T. Smith (Little Red And The Hungry Lion) is the first title in what promises to be a rip-roaring, laugh-out-loud, non-stop action series for those who crave mystery and adventure just like Mr. Penguin.  Grab your favorite hat, your trusty backpack and don't forget a tasty fish finger sandwich.

It was 10:32 on a Monday morning, and Mr. Penguin was twirling about slowly on his swizzly office chair and flipping the end of his beak with a crabstick.

On the verge of despair at the lack of interest in his advertisement, the ringing of his phone startles Mr. Penguin so much he, through a series of unbelievable events, ends with his bottom stuck in his waste basket.  It makes taking his first real job a tad bit uncomfortable, but it is Boudicca Bones from the Museum of Extraordinary Objects.  When he hears the words toilet plunging through the ceiling, stuffed walrus and buried treasure, he nearly explodes with joy.

Within minutes Mr. Penguin and his trusty associate Colin, a bowler-hat-wearing spider with the strength of a ninja master, are standing in front of the museum.  (As they make their way to the building, they encounter a friend, Edith Hedge who lives in the park.  She wears fifteen raincoats and a pigeon named Gordon is usually on her head.)

In short order, Mr. Penguin, Colin, Boudicca Bones and her odd brother, Montague are searching every nook and cranny of the museum floor by floor.  (Montague is odd because he is at least seven feet tall and has hands the size of frying pans in contrast to short, round-as-a beach-ball Mrs. Bones.)  Using a copy of A History of the Museum of Extraordinary Objects and a clue of x marks the spot the searchers are stumped until Mr. Penguin brilliantly solves the puzzle of finding the x.  During their explorations Colin hears strange sounds and feels as though someone or something is watching them.

After traversing a darkened staircase leading them under the museum, the foursome encounters a hot steamy rainforest, a cryptic note, unscrupulous thieves, a raging river, a thunderous waterfall and gigantic hungry beasts, not necessarily in that order.  It seems as if everything is conspiring to keep them from locating the buried treasure. To make matters even worse, Mr. Penguin and Colin find themselves in serious, life or death trouble.

With twists and turns as frequent as those on the underground trail, the story keeps you guessing. You will gasp at the surprises and cheer for the cleverness. And just when you think it can't get any better, it does.


Twenty-three short chapters combine descriptive narrative and snappy conversations penned by Alex T. Smith.  The chapter titles along with the final sentence in each chapter invite, sometimes demand, that you continue.  The pacing is fast, and humor is found in abundance.  Here is a passage.

Monty cracked his knuckles (which sounded like a wooden fence breaking in a tornado) and knelt down next to the X.  He pressed the button.  Then he pressed it again.
Nothing.
He smacked it with his fist, stamped on it with his shoe, grunted, and hurried off to the nearby janitor's cupboard to grab a sledgehammer.
He was just raising the hammer above his head when Colin tapped him politely on the ankle and held up his notepad.
It said ALLOW ME. (Note: Colin does not talk but uses a notepad to voice his thoughts which adds to the hilarity.)
Everyone stepped back and watched as Colin took the floor.  He scuttled over to the button and carefully observed it for a few seconds.  Then he pressed four of his feet together and bowed respectfully.  He took a deep breath, narrowed his eyes, and . . .


Readers get their first glimpse of Mr. Penguin and Colin on the front of the matching dust jacket and book case.  The adventurer's hat, satchel and magnifying glass are essential to Mr. Penguin's pursuits.  On the opening and closing endpapers in hues of orange, we are privy to lush rainforest flora.  At the beginning and end of the book, a front page from The Cityville Times gives readers a peek into the community and shows how the status of Mr. Penguin and Colin as adventurers changes.

The highly detailed, fine-lined drawings done in black, orange and white by Alex T. Smith appear on almost every page turn in a variety of sizes depending on the narrative and pacing.  At times in order to enhance the text the canvas of white shifts to orange and even black with white lettering.

One of my many favorite illustrations spans two pages.  It shows Mr. Penguin and Colin on the left speeding through the exotic plants and trees they discover under the museum.  Mr. Penguin's body shape trudging along on his tiny legs is funnier than funny.  Adding to the comedy is his hat with the arrow through it, and the magnifying glass held in one of his flippers as if he hopes to spy something important.


Readers will hardly be able to stop reading Mr. Penguin And The Lost Treasure written and illustrated by Alex T. Smith once they start.  Who can resist mystery, adventure and giggles and grins?  I believe this would be a fun read aloud or book club selection.  Be sure to place a copy on your professional shelves and in your personal collections.  (Book two has already been released in the UK and book three is set to be released there this autumn.)

To learn more about Alex T. Smith and his other work, please visit his website by following the link attached to his name.  Alex T. Smith maintains an account on Twitter.  At the publisher's website there is a link to Activity Sheets.  You can get a peek at the first few pages, including the first newspaper front page, here.


Be sure to stop at the other sites on the blog tour.