All you have to do is gaze upon the face of a dog and know there is much more to them than meets the eye.  Science tells us of their extra special sensory skills.  Increasingly we are learning more about how their minds work.  History tells us of their amazing feats.  But the looks they give us, their body language and even the way they sigh, tell us how their souls transcend known facts. 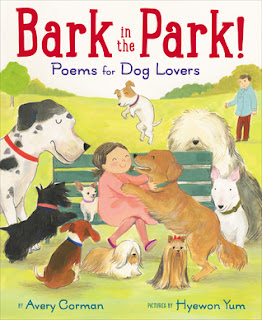 In 2019 two books focusing on dogs and poetry were released.  The first Bark in the Park!: Poems for Dog Lovers (Orchard Books, an imprint of Scholastic Inc., March 26, 2019) written by Avery Corman with pictures by Hyewon Yum takes us on a stroll through a variety of breeds.  Their characteristics are praised in lyrical phrases and animated images.

Afghan Hound
Although he's noble and aloof,
He's still a dog, so he still says, "Woof!"

In the initial poem of thirty-eight, even if we've never seen an Afghan Hound, we know this is a regal dog in their demeanor.  For the next few poems dogs are presented in alphabetical order, most with four-line poems.  Then among the presentation of Boxer and Bulldog, a poem about a Pug appears.  This is exactly what you can expect from dogs.  They don't care about alphabetical order.

Next the size of a Great Dane is compared to that of a Chihuahua. A Cocker Spaniel with ears flapping like wings runs near a Bedlington Terrier.  Did you know they look like a sheep?  Several other terriers, Bull, Smooth Fox and Jack Russell, strut their stuff, muscle, moxie and a whiz.

Lovable but nevertheless canines with strong dispositions, the German Shepherd, Doberman Pinscher and Rottweiler are skillfully described.  We walk by dogs who love the water, those who bring back items and people. like the Labrador Retriever and Newfoundland.  Dogs who cuddle, race and rescue lead us home.  Then and there, we get to enjoy our own special furry friends, of all shapes, sizes and ages.


As a debut picture book author Avery Corman, better known for his adult titles, is first in show with his two and four-line poems.  Clearly, he has studied each breed he presents portraying their distinguishing personalities with keen insight.  All his two-line poems rhyme or use repetition.  Of his four-line poems you are never sure what kind of rhyming scheme will be used or if repetition will be part of the form his poems take.  Here are two more poems.

Jack Russell Terrier
She's going to catch any ball you toss her.
The Russell fetches like a whiz.
She doesn't like any dog to boss her.
She thinks she's bigger than she is.

Saint Bernard
The Saint Bernard is helpful.
She'll help you in a snap.
But if she wants to take a nap,
She won't fit in your lap.


The image spanning from left to right, on the open and matching dust jacket and book case, shows a gathering of many different breeds of dogs focused on the little girl, looking at each other or at readers.  This moment is magical for it's highly unlikely all those dogs would ever sit there quietly unless it's someone whose heart matches their own.  This scene is an invitation to join the dogs and this girl on their daily adventures.  The child and her guardian/parent are in every illustration throughout the book.

On the opening and closing endpapers all thirty-eight dogs, nineteen on the front and nineteen on the back, are depicted in their very best stance.  Each one is labeled.  On the title page a portion of an interior image is used.  It's a boy taking a yellow ball from the mouth of his Labrador Retriever.

Artist Hyewon Yum, like the author, has surely studied each of these breeds.  She has rendered them is all their perfection.  It's wonderful how the humans and their dogs match.  Children are everywhere in the illustrations being their charming selves.  We begin the visuals with homes along a street.  The little girl and her guardian/parent are walking down their steps as the Afghan Hound walks by with two humans, the younger one is much more interested in two squirrels. At the end of the book we are back at the home but Hyewon Yum brings us close to the open doorway and porch steps.

Each page turn reveals a double-page picture from a variety of perspectives.  Each is like a map of the walk taken by the little girl as we travel through the community and the park.  Individuals and their dogs in one picture will appear in the next picture.  It's great fun to notice all the details.

One of my many favorite illustrations shows students boarding a school bus.  A Border Collie is trying to keep the little gals and guys in line.  One student hanging on to the hand of the teacher is pointing to a squirrel. (Squirrels are in a lot of pictures.)  The squirrel is standing up with arms and paws folded in front of him.  Across the street the little girl is walking with her guardian/parent in one direction.  In the other direction a lady with her Collie is waiting to cross.  They appear in the next picture.  This image, like all of them, are in full, bright colors with delicate line work. 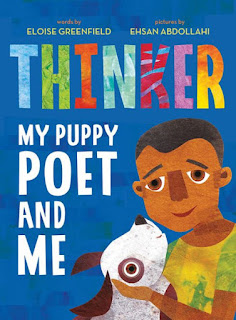 On April 2, 2019 Thinker My Puppy Poet And Me (Sourcebooks, Jabberwocky) written by Eloise Greenfield with pictures by Ehsan Abdollahi was released. As previously stated, there is more to dogs, especially this dog, than science can tell us.  There is a secret this dog and his owner share.

Naming Me
They brought me from the neighbor's house
and put me on the floor,
they talked about their love for me,
and I thought, "More! More! More!

I kept my eyes from opening,
I kept my voice on mute,
until I heard somebody say,
"Let's name him something cute."

That's all this puppy needs to hear before he starts to talk.  His boy named Jace hears him and knows him to be a poet.  That's why he is named Thinker.  In fifteen more poems Thinker and Jace poetically reveal their lives in this new family situation.

After his welcome party, Thinker and Jace, have a serious conversation about their ability to communicate with poems.  For Thinker without speaking in poems, everything else is a series of barks and woofs.  The twosome tackle life's mysteries together but Thinker simply does not understand why he has to stay home when Jace goes to school.  (He does enjoy Kimmy, Jace's little sister.)

Wherever they go, Thinker must remember to not recite poems.  One day, Thinker is told tomorrow is Pets' Day at school.  He gets to go with Jace, but he must promise not to talk.  Do you think he can keep that promise?  What do you think will happen if the promise is broken?


These poems written by Eloise Greenfield can be read repeatedly and the spirited wonder of each one never fades.  Each one has a special cadence through word choices, rhyming, and poetic styles like free verse, haiku and a rousing rap.  Some are in the voice of Thinker and others have Jace speaking.  Readers will leave each reading believing in the truth of Thinker and his best friend, Jace, and wanting to meet them both.  Here is a poem by Thinker.

Birds Fly
Birds fly,
flap their wings,
and touch the sky.
Why can't I just
wag my tail
and sail?


Rendered using handmade and hand-colored paper. . .to create the collage art all the images, beginning on the open and matching dust jacket and book case, convey the warm and happy affection between this boy and his dog and his family.  This display of bright colors with the white title text on the blue background greets readers and asks us to open this book.  To the left, on the back, Jace and Thinker are looking at us from behind a wall.  Their expressions convey they have a secret and we are about to be a party to it.

A gorgeous illustration is spread across the opening and closing endpapers.  On a pale blue sky canvas along the bottom are varying shades of pink blossoms with spots of yellow. Thinker on the left is running through them. Blossoms billow into the air as a lovely, vividly-hued swallow takes flight on the right.

Each visual spans a full-page or double-page.  We are usually close to the characters in the poems.  This gives a more intimate feel to each image.  The eyes on the people are beautiful, large and expressive.  The collage work of Ehsan Abdollahi is so exquisite we feel as though each scene will burst into life at any moment.

One of my many favorite illustrations is for the poem titled Two Poets Talking.  It is set in the neighborhood.  Three little girls are playing outside in the grass in front of shrubs and a large tree.  One of them is Kimmy.  On the right, closer to readers, Jace is seated on porch steps.  Thinker is nestled between his legs with his front paws on Jace's chest.  The boy has his hands gently cupping Thinker's head.


Bark in the Park!: Poems for Dog Lovers written by Avery Corman with picture by Hyewon Yum and Thinker: My Puppy Poet And Me written by Eloise Greenfield with pictures by Ehsan Abdollahi are books that must be shared with readers one-on-one or aloud with a group.  They will appeal to a wide range of ages.  I highly recommend them for your professional and personal collections especially for National Poetry Month and Pet Month.  They are a splendid display of poetry, pets and pictorial portraits.  At the close of Thinker: My Puppy Poet And Me Eloise Greenfield has written a letter to readers.