Doing What We Do

The shifts from one season to the next, twice a year, have been marked over the past decade, at least, by long periods of rain stretching from days into weeks.  Sometimes, initially, it is a welcome respite after a summer drought or a winter of too much snow; other times it causes great distress on the land, on the waterways and on the wildlife.  In balance, water is life. 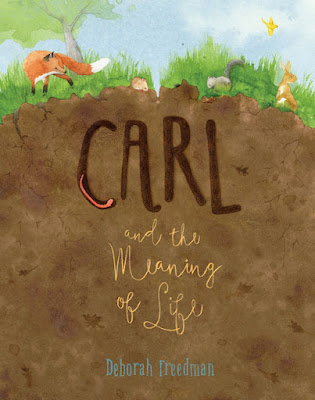 Earthworms, during rain, crawl from the earth to better breathe.  They are caretakers of our soil.  Every specie and its actions are linked.  Even the tiniest task can impact those affected by its absence or presence.  In Carl and the Meaning of Life (Viking, April 2, 2019) written and illustrated by Deborah Freedman an earthworm is asked a question for which he has no answer.  Like all good stewards he seeks the truth.

Carl was not a bird.

There are many things Carl was not, but without a doubt Carl was an earthworm.  His days were spent in earthworm activities in the dirt.  He moved constantly, made endless burrows, chewed and consumed fallen debris and left castings behind to nourish the soil.

One day a field mouse wanted to know why Carl did all those things day after day.  Carl did not know why but he wanted to discover the answer.  His fluffy soil making stopped.

In turn he questioned a rabbit, a fox, and a squirrel.  Their replies simply did not fit Carl.  The earthworm's search continued for a very long time until the fluffy soil changed to hard, unproductive ground.  The animals left this waste land.  In loneliness Carl let out a sniffle.  A sniffle sound came back to him.  He was not without company.

At the plight of this creature, Carl now realized what had happened to the dirt.  He worked and worked for months and months creating fluffy soil.  A single voice made an observation.  Carl found his truth.


Deborah Freedman has the ability to find the extraordinary in the ordinary.  Through her words we have pondered siblings, play, friendship, the act and art of storytelling, bravery, places we call home and now how to find our purpose and place in the world.  Through the narrative and conversations Carl has with other animals we discover how, for many of us, we do what we do because we love to do it.  We rarely ask why.  As we journey with Carl the why for him, for the other animals and for us becomes crystal clear.  Every word, every thought and every sentence connect us to the undeniable, beautiful meaning of life.  Here is a passage.

"Why are you talking to a fox?!"
cried a squirrel.

Carl was startled.
"Because the field mouse is waiting
and wants to know what I am here for!"

The squirrel declared,
"I'm here to plant trees.
Trees are where I sleep."


When you open the dust jacket the mound of grass-covered dirt continues on the other side of the spine extending downward in an arc.  A doe, raccoon, bear and beaver meander in the grass.  Deborah Freedman features the fox, field mouse, squirrel, rabbit, an important tiny creature and her yellow bird along with Carl on the front due to their conversations.  Signature soft, delicate colors form each animal and the setting.  The words Carl are embossed as if they are burrows in the dirt.  (I am working with an F & G.  My copy has not arrived yet.  If you wish to see the book case go to @MrSchuReads on Twitter for the date of March 16, 2019.)

The opening and closing endpapers are lush fields in varying shades of grassy green.  There is a notable difference on the closing endpapers.  A double-page picture for the title page is an early morning sky, purple gray with rays of light shining toward Carl, perched on a small mound of dirt beneath the text.  Most of the illustrations, rendered in pencil, watercolor, and bits of colored pencil, and assembled in Photoshop, span two pages.

Intricate details form each animal. Careful readers will see the tiniest of creatures in the scenes; dragonflies, a bumblebee, a praying mantis, a moth, and a spider web.  They will also see flashes of the yellow bird shown at the beginning in the body of the book and on the verso at the end.  Deborah places animals on one page and has them move into another scene.  This gives us the very real sense of Mother Nature always being in motion.

Three times a circle, like a magnifying glass, brings us close to Carl, enlarging him in comparison to his surroundings.  For emotional impact Deborah Freedman changes the background colors.  Carl is placed small and alone in darkness, a vast waste land, and on white.  Several times the script used for the title text supplies emphasis on words within the narrative.

One of my many, many favorite illustrations spreads across two pages.  Carl is raised up and speaking with the rabbit on the left side.  Above them, partially hidden and intently watching is the fox.  In the field replete with flowers on the left and right, shown as pale shades of green, six bunny babies are leaping.  Deborah Freedman has depicted them exactly as they are apt to play.  There is something soothing about this scene in its normalcy.


Despite our physical stature or the size of our accomplishments Carl and the Meaning of Life written and illustrated by Deborah Freedman allows readers to see their value in our world.  Carl is one of the most endearing earthworms readers will ever meet.  I highly recommend this title for your personal and professional collections.

To learn more about Deborah Freedman and her other work, please follow the link attached to her name to access her website.  At her website you can see interior views from this book and her other titles. Deborah has accounts on Instagram and Twitter.  At the publisher's website you can view the opening endpapers.  At Scholastic's Ambassador of School Libraries, John Schumacher's site, Watch. Connect. Read., Deborah Freedman stops to chat about this book.  (You can see the book case there, too.)
Posted by Xena's Mom at 12:30 AM