Dr. Seuss (Theodor Seuss Geisel) published How The Grinch Stole Christmas! in May of 1957.  This creature and his dog, Max, attempt to stop Christmas from coming to the Whos in Whoville.  On Christmas Day from the top of Mt. Crumpit, Grinch is shocked to hear singing instead of sobbing down in Whoville.  They say

that the Grinch's small heart grew three sizes that day! 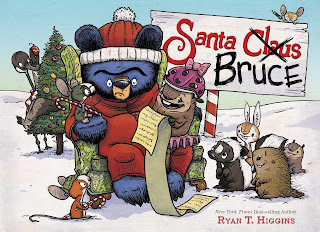 A bear whose grumpiness has made readers laugh in Mother Goose Bruce, Hotel Bruce, and Bruce's Big Move is back in a fourth companion title.  He is as cranky as ever in Santa Claus Bruce (Disney Hyperion, September 4, 2018) written and illustrated by Ryan T. Higgins.  Will Bruce's peevish personality surrender to seasonal cheer?

Bruce was a bear
who did not like the holidays.

Being a bear, Bruce preferred to slumber through the winter but his acquired family, four geese and three mice, had other ideas.  They wanted to have an old fashioned, shared Christmas.  The house was decorated courtesy of the geese and the mice made an enormous batch of eggnog.  Bruce was not happy about this; not happy at all.

To keep warm (he detested being cold) Bruce wore red, long underwear and a red hat when he was outside.  In a blink of an eye, a young raccoon mistook him for Santa.  Despite Bruce's denials, the youngster left announcing to the woods he had met Santa.  In another blink of an eye, multiple animals were gathered outside Bruce's home.  To his unending sense of dismay, one of the members of his family let everyone inside.

Bruce slumped in a car as critter after critter shared their secret Christmas wishes with him.  To make it worse, the parents arrived to thank Bruce for his. . . er. . . joy with their children.  While Bruce was trying to process yet another case of mistaken identity, Thistle (a mouse) announced

Santa Bruce is going to deliver presents to all of your kids tonight!

Bruce stalked toward his bed.  The mice had other ideas.  For every objection he made, the mice had a solution.  Reluctantly Bruce agreed to go out as Santa Bruce.  His crabby self was getting crabbier with every tug on the "sleigh" he ends up pulling and every complicated delivery.  All Bruce wanted to do as dawn breaks was sleep but he had no such luck.


The comedic pacing Ryan T. Higgins supplies readers with his impeccable blend of narrative and conversational commentary by the characters is like opening a gift full of laughter with every page turn.  The other characters are oblivious to Bruce's sulking, gruffness and declarations which continuously heightens the hilarity.  Ryan cleverly and carefully leaves spaces in the text for his illustrations to complete a humorous moment.  Here is a passage.

Tell them I'm not Santa.

Everyone, listen up!
Single file!  No pushing!
Santa Bruce has time
to see all of you!
Who wants cocoa?


You cannot look at the opened dust jacket, especially the front without laughing.  The contrast between the expression on Bruce's face and the faces of the young animals around him is funnier than funny.  Ryan T. Higgins includes the three mice who continually push Bruce into uncomfortable situations.  Notice the third mouse with the pencil in his hand at the top of the image.

To the left, on the back, a Christmas red provides a canvas for a loosely framed white oval.  One of the geese is walking with the three mice.  Two of them are carrying a large evergreen wreath with a big red bow.  This illustration is varnished as is the sign on the front.  Santa Claus Bruce is in red foil.

The book case, front and back, is one of Bruce's gifts wrapped in green paper with a red bow.  On the far left and far right the paper is ripped.  It reveals the gift.

The opening and closing endpapers are a scene in the woods.  It's serene with Bruce's house on the right.  In the first one, colored Christmas lights outline windows, the roof and door.  A wreath hangs between the front window and the door.  For the closing everything is now dark except for the starry sky.  Smoke still comes out the chimney.

As soon as you see the mice on the title page, you know something wild and wonderful is going to happen.  On the next page (verso) they are dragging a Christmas tree toward Bruce who is standing, arms folded, on the first page.  (The verso background is bright red.)

The illustrations created using scans of treated clayboard for texture, graphite, ink, and Photoshop are on full pages with large areas of white space for framing, full pages, edge to edge, and large double-page pictures, edge to edge.  For purposes of the passage of time, smaller images are grouped three times.  The body postures and facial expressions of the characters send the laughter factor sky high.

One of my many, many favorite illustrations is a close-up of Santa Bruce hunched over in his chair.  He is not happy at all.  The parents have left after the announcement was made that gifts will be delivered.  One of the mice wearing an elf hat is giving the disgruntled bear a thumbs-up.  The other in a baseball cap with hands raised in the air cries out:

It's a Christmas miracle!


Santa Claus Bruce written and illustrated by Ryan T. Higgins is going to be a favorite in any setting, story times in schools and public libraries and for family read aloud gatherings.  You are going to get requests for repeat readings.  You might want to stock up on crackers.  I highly recommend this title for your professional and personal collections.