Last night, or rather very early this morning, a yip split the air outside the house.  It was followed by a melodic, soulful howling of at least one coyote.  It was breathtakingly beautiful and a reminder of a world that exists for many when others are sleeping.

There are animals whose lives function best when darkness changes the landscape into a multitude of shadows and shapes not seen during daylight.  There are people who work tirelessly during the night to ensure safety and stability for many individuals. Published in 2018 there are two lovely titles presenting those whose tasks take them from their homes while the rest of the community sleeps. 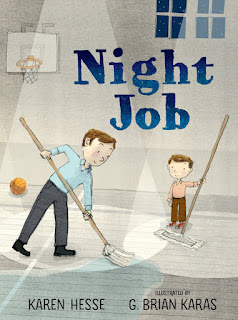 Night Job (Candlewick Press, September 11, 2018) written by Karen Hesse with illustrations by G. Brian Karas invites readers to join a father and his son for one night.  In that one night we are introduced to a lasting love.  We understand the precious nature of memories acting as the glue for an unbreakable bond.

On Friday nights, when the sun goes down,
I snap the clips shut on Dad's lunch box
and climb onto the back of his bike.

The boy, hands and arms clasped around his father's body, roar down the highway on a motorcycle.  After passing the bay, they arrive at their destination, a school.  The odor of the air has shifted from fish to lilacs.

After unlocking the door to the building, the two enter and start to work.  In the gym, they begin, one dusting the floor and the other shooting baskets.  As they clean the cafeteria and stage, a radio momentarily takes them to a baseball game.  Together they sweep one hallway after another hallway.

Two hours before midnight they stop and eat their packed meal in the courtyard. Later when they move to the library, one polishes and another one reads aloud until he falls asleep.  With dawn less than two hours away, the dad and his son get ready to leave, riding the bike back home.

They pass wildlife and fishermen getting ready to work.  Quietly they enter their neighborhood.  A regular routine guides them to rest and dreams.


When Karen Hesse writes this story, she chooses to direct our attention to very specific details.  Her poetic depictions of these elements lure and lull us into the magic found in this night.  She takes what is normal and ordinary and lifts it up.  We realize the priceless nature of this job and this relationship.  Here is a passage.

We pull into our space.
Dad hauls out a ring of keys
as big as the rising moon.
He opens the door
and the building sighs.
Come, it whispers to us.


There is something special and welcoming about the fine lines forming eyebrows, eyes, noses and mouths and creating soft scenes in the artwork of G. Brian Karas.  On the front of the matching dust jacket and book case, as the dad and his son work, we see a fondness for their tasks and for each other.  To the left, on the back, we join them in the courtyard as they eat their nighttime meal.  They are cozy in the darkness with light from the hallway shining on them.

A deep muted blue covers the opening and closing endpapers.  G. Brian Karas begins his pictorial interpretation on the initial title page giving us a view of the apartment where the dad and son live.  All other windows are dark except for their window. In four horizontal squares spread across two pages the preparations and leaving of the duo are placed beneath the title text on the formal page.

The dark muted colors shown in small square images, full-page and double-page pictures, and illustrations moving over the gutter to create columns for text beckon to readers.  At another point G. Brian Karas uses three vertical panels over two pages to provide the passage of time.  It's as if we have stepped into another realm, one of comfort and consistency.

One of my many favorite illustrations is the third panel of those vertical illustrations.  In this one as our eyes move from left to right, we understand the floor polishing is completed and the dad is now dusting book shelves.  Off to the right in a corner made by higher book cases sits a green sofa with a single light shining on it.  The boy has fallen asleep.  He has taken off his red sneakers.  He is still holding the book he was reading in one hand, but it is now resting on the floor.  Bliss.


You want to hug this book.  You want to put it next to your bed, at the very least, or maybe under your pillow.  You want to share Night Job written by Karen Hesse with illustrations by G. Brian Karas with everyone.  You certainly will want a copy on your personal and professional book shelves.
To learn more about Karen Hess and G. Brian Karas follow the links attached to their names to access their websites. At Candlewick Press and Penguin Random House you can view interior images.  Candlewick Press has an author's note about the journey to publication.  In a beautiful post, author, reviewer and blogger, Julie Danielson, speaks about this title on her blog, Seven Impossible Things Before Breakfast.  G. Brian Karas has an account on Twitter. 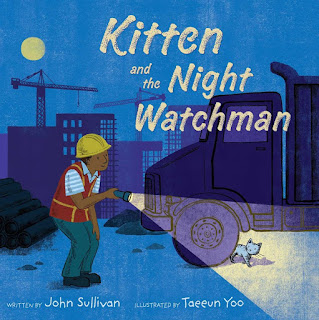 Sometimes during the night beings who normally hide, reveal themselves.  Their need for connections overcomes their fear.  Kitten and the Night Watchman (A Paula Wiseman Book, Simon & Schuster Books For Young Readers, September 25, 2018) written by John Sullivan with illustrations by Taeeun Yoo is a story about one of those connections.

The night watchman hugs
his wife and children . . .

and drives to work.

As the sky turns red and orange and gold, he takes his solitary walks.  Every aspect, doors, windows and workshops, in buildings are checked.  He strolls through yards full of equipment.  A startled bird shrieks into the dusk.

Pausing for a moment the night watchman sees a full moon and stars bathe the city in light.  A soft sound gets his attention.  A kitten has returned.  Now the man is not alone as he creates a path with his flashlight.

Machines look like monsters or insects.  A jet travels overhead.  A dinner is shared as the companions rest.  Wherever he goes, the kitten follows, until she vanishes.

Where did she go?  A dog barks.  Travelers in cars and on trains make other night noises.  The night watchman can't stop thinking about the kitten.  Hours tick-tock past until the sky lightens.  A man leaves his workplace in his car, heading home with a gift.


In simple declarative sentences by John Sullivan, this story unfolds.  Through this technique we are able to walk side-by-side with the night watchman.  His descriptions of sights and sounds disclose the changes night brings.  Here are some sentences.

A jet glows in the night sky.
SHHHHEEEEEEEEERRRROOOOOOOOOMMMMMM
And all is quiet again.


The open and matching dust jacket and book case, front and back, are symbolic of a discovery and continuation of a lasting friendship.  On the former the watchman finds his feline friend has returned again.  On the later, what was lost is found.  The moon and flashlight beam on the jacket are varnished.

The color palette used by Taeeun Yoo is rich and bold making use of blues and purples with complementary splashes of yellow and red.  She eases into the night hues by starting with close-of-the-day shades.  The opening and closing endpapers in contrast are a pale robin's egg blue.  On the initial title page, the words are placed on a canvas of a slightly darker blue with golden colors.  This continues to the verso and title pages with deeper and warmer hues of gold.

Each illustration rendered using digital and hand-printed textures is on full pages, double pages or loosely framed circles.  Even in the shadows encountered on the night watchman's walk, there is a warmth.  When light intrudes it does so in sync with the night.  Taeeun Yoo alters her perspective to intensify the emotional impact of the story.

One of my many favorite pictures is on a single page.  We are close to the night watchman viewing only the upper portion of his body.  In his hands he is holding the kitten close to his face.  Both have a look of pure contentment on their expressions.  Thick lines of light outline elements on their bodies.


Here is yet another book you want to hug and share with the world.  Kitten and the Night Watchman written by John Sullivan with illustrations by Taeeun Yoo is this man's author debut.  It is based upon a true story, his story.  I can't imagine a collection, personal or professional, without a copy of this book.  To learn more about Taeeun Yoo follow the link attached to her name to access her website.  She maintains an account on Instagram.  John Sullivan is interviewed at the Society of Children's Book Writers and Illustrators.  Taeeun Yoo is interviewed at Let's Talk Picture Books.  Both interviews focus mainly on this title.  At Seven Impossible Things Before Breakfast, author, reviewer and blogger, Julie Danielson, talks about this title.  It's a treat to see all this artwork.
Posted by Xena's Mom at 3:12 PM