We all know children are the last people to admit they are sleepy.  Even if they can hardly sit or stand upright, they would rather give up dessert for a year than admit they are tired.  They live life to the fullest and simply don't want to end any of their days.  You have to love their energy and attitude, even if you long for them go to bed and fall asleep. 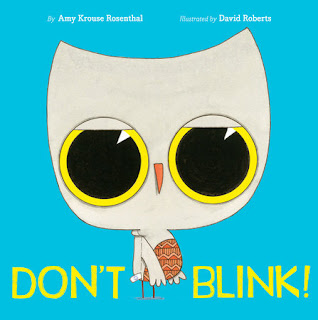 Give a child a game especially with a challenge and it's an invitation they can't refuse.  DON'T BLINK! (Random House, April 3, 2018) written by Amy Krouse Rosenthal with illustrations by David Roberts openly asks for reader participation.  It's the best kind of dare.

Here's how it works.
If you can avoid getting to the end of this book, you can avoid bedtime, simple as that.
(It's a pretty sweet deal, actually.)

The true test is the tricky part.  Every time you blink you have to turn a page.  You don't want to turn pages, so you definitely can't blink.

Now we all know as soon as you've been told not to do something, you have a difficult time not doing it.  It's as if all of a sudden you have to do the thing you are not supposed to do. Of course, readers will be unable to stop from going to the next page.  The narrator, the owl, is flabbergasted that a page is turned.  He believes you blinked.  You are warned again.

As each page is turned (you can't help it), the owl continues to issue his statement.  You are getting closer and closer to completing the book.  We know what that means.  Game over.  Bedtime.

In his infinite wisdom the owl suggests you do the opposite of blinking which is staring.  A variety of subjects are presented for your attempt at staring.  With each new tactic (and there are many), the reader is getting nearer to the end of the book.  With a final exclamation

an entirely new approach is suggested.  This clever twist will have readers wondering, smiling and requesting "read it again" unless they are already on their way to dreamland.


For those of you familiar with the writing of Amy Krouse Rosenthal (or even if this is the first of her books you read), you will be astounded at the way in which she finds the universality in any given area.  She has an innate manner in reaching out to all readers creating a genuine and shared experience.  In this particular title she involves readers through the dialogue of the owl.  He talks directly to us on every page guiding us to avoid bedtime with ample doses of humor.  Here is a passage.

JEEPERS!
You BLINKED again.
I thought you wanted to stay awake!
You do realize that each BLINK
gets you closer to you-know-what?!


Look at the front of the dust jacket.  Look at those large eyes.  Despite the words of the title, don't you want to blink?  This owl is a definite attention-grabber.  The limited color palette used in this first image is maintained throughout the book.  If you look closely, the tag on the body of the owl is the illustrator's name, David Roberts.  To the left, on the back of the dust jacket, the owl is starring at a toy zebra, trying not to blink.

The opened book case is on a canvas of black.  The illustration on the back is identical to the dust jacket but on the front there is a distinctive difference.  It hints at the book's conclusion.  The opening endpapers are bright yellow and the closing endpapers are black.  These are other indications at the twist the story will take.

On the title page the text, DON'T BLINK!, appears within the owl's eyes.  The liberal use of white space accentuates the words, expressions and body language of the owl.  A slight change in his arms and eyelids conveys the exact mood being depicted.  It also will have you laughing out loud.  An ingenious technique employed toward the end of the book has the elements in the visuals shown as if they are within an eye, an eye slowly closing in sleep.

One of my many favorite illustrations is when the owl (Is he a beloved stuffed animal?) is asking the reader to

STARE at the person next to you.

That person happens to be a toy zebra, casually sitting upright.  The chunky body, stripes, rounded-ears, large nose and wide eyes are guaranteed to make you smile.  This picture (all the pictures) is surrounded by white.  It is on a single page.


No matter how many times this book, DON'T BLINK! written by Amy Krouse Rosenthal with illustrations by David Roberts, is read laughter is sure to be part of the story.  Readers will be commenting in response to everything the owl says.  You might want to pair this with Good Night Owl (Disney Hyperion, April 19, 2016) written and illustrated by Greg Pizzoli.  This is a surefire winner for story times and bedtimes.  I hope you place a copy on your personal and professional bookshelves.

To learn more about the late Amy Krouse Rosenthal and David Roberts and their other work, please follow the links attached to their names to access their sites. David Roberts maintains an Instagram account.  At the publisher's website you can view interior images.
Posted by Xena's Mom at 7:57 PM