Leaving And Staying, Staying And Leaving

As an educator, as a school (and public) librarian, you have goals to accomplish with your students (and young patrons) every day of every week throughout the year.  The most rewarding thing about these plans is that they can change significantly from paper to practice.  Responses given to you by the children necessitate alterations.  They may think, speak and act far differently than you envision.  And that is a thing of beauty. 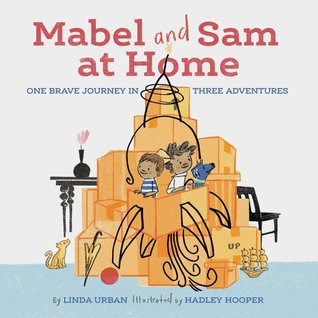 Their ability to assess a situation and imagine an unexpected outcome is why children are our greatest hope.  Mabel and Sam at Home: One Brave Journey In Three Adventures (Chronicle Books, June 5, 2018) written by Linda Urban with illustrations by Hadley Hooper is a joyful display of words and images.  It is a great day of change for these siblings but they are looking beyond the four walls of their new home.

ON THE HIGH SEAS
At the new house, there were movers and shouting and boxes and blankets.

There were chairs where chairs did not go
and sofas where sofas could not stay.

With all this hustle and bustle happening Mabel and Sam had to locate a protected place.  A box, a big blue rug, a starfish-shaped sponge, a mop and a curtain were all these children needed to set sail.  The Handle With Care ship took them over wild waves, near pirates and through a sea full of creatures.

It was determined after a sister and brother-sort of discussion worry and being scared were best prevented by keeping busy.  During one of his tasks Sam spied an island.  Another verbal exchange had the duo staying aboard rather than going ashore.  In the end, the "inhabitants" of the new land lured the captain and her first mate from their ship with a time-honored trick.

In a new house "before" furniture looked out of place.  The surroundings have shifted.  Mabel decided Sam had to visit the New House Museum.  Familiar objects were given new names.  Familiar objects became artifacts of importance.  Finally Sam discovered an artifact of great value.  It was the only one of its variety remaining.  Now he got to demonstrate its use.

As early evening descends there was a final voyage.  Mabel and Sam blasted into space as astronauts.  Using the covers, red, from her bed as a line Mabel lets Sam explore.

Astronaut Mabel pulled Astronaut Sam back inside the ship.
"Did you see anything out there?" she asked.

"I saw lots of things out there," said Astronaut Sam.
"Out there is where everything is."

The voyagers continued chatting about their destination, Planet Perfecto, being bold and having enough space to think.  It got darker and darker until a light brightened their path.  Parental permission was granted for a landing and special bedtime accommodations.  As sleep took the adventurers to dreamland, they knew tomorrow promised to be another day of discovery.


If Linda Urban were sitting in front of me at this moment, I would reach out and give her a hug.  Whether we are reading her lively narrative or "listening" to a chat between Mabel and Sam, we feel pure happiness bubbling up inside our hearts.  Her descriptions of the move; what is happening outside of the three adventures (On The High Seas, At The Museum and In Space) is nearly poetic, creating a cadence.

When the children are imagining they are somewhere other than their new home every thought is in keeping with their perspective of this particular place.  On the seas terminology such as ahoy, first mate, swab the deck and all ashore are seamlessly part of the story.  At the museum Sam becomes acquainted with proper museum etiquette, the meaning of artifact and the Ancient Chicken of Cleveland.  As astronauts in space they muse about the move by thinking of being bold and the necessity of space.  Of course, their companion in these three adventures, Mr. Woofie, the family dog, is a necessary and important character.  Here is another passage.

Tour Guide Mabel led Sam to the next exhibit.
"Do you know what this is?" asked Mabel.
"My Bunny Wubby," said Sam.
"It is a Mississippi Wishing Rabbit.  They are very rare."
"Oh," said Sam.
"Petting its ears brings seven years' good luck," said Mabel.
"Really?" asked Sam.


When my copy of this book arrived, the first thing I did was smile and laugh when I saw the matching dust jacket and book case.  Just as the children do in their adventures, Hadley Hooper does in her illustrations.  She takes the ordinary, the table, stack of boxes and chair, and forms one into a rocket ship.  The design on the front is wonderful!  Notice how the top of the rocket crosses the "o" in home with the star pointing to the "and".

To the left, on the back, a great deal of white space becomes the canvas for the display of the trickery used by the "inhabitants" to get Captain Mabel and First Mate Sam off the Handle With Care.  Hadley Hooper's color palette here and throughout the book leans toward primary colors.  (She assigns a thematic color to each adventure.)  On the opening endpapers is a deep spring green.  A rich blue covers the closing endpapers.

Rendered in tradition printmaking techniques and finished in Photoshop the images, most spanning two pages, are sheer delight.  The children's expressions and body postures (and Mr. Woofie's too) endear all three of them to readers.  The attention to detail, Mr. Woofie's swimming in the lines of the rug as if they are waves, the blend of reality (the sofa and pillow) with walls of a potential museum with paintings and statues, and the interior of the rocket ship as the duo are blasting through space, is exquisite.

Of the many illustrations (the entire book to be truthful) one of my favorite pictures spans two pages.  From left to right the water parts and swirls of white wave and point to mostly blue on the right.  The text is cleverly placed in the white portions.  Fish swim in the middle of the blue.  As our eyes move to the right a three-masted ship glides off the edge of the page.  Mabel and Sam are shown in three separate places on the right.  In each of them Mabel is acting as captain.  Sam swabs the Handle With Care, fishes and keeps a lookout.


Mabel and Same at Home: One Brave Journey In Three Adventures written by Linda Urban with illustrations by Hadley Hooper is brilliant!  The blend of narrative and art invites us to join Mabel and Sam.  And we want to be there with them.  Children will be asking you to read this one over and over.  I highly recommend this title for your professional and personal collections.

To learn more about Linda Urban and Hadley Hooper and their other work, please visit their websites by following the links attached to their names.  Author Kate Messner chats with Linda Urban about this book on her website.  Hadley also has some art on Tumblr pages.  Hadley Hooper visits Seven Impossible Things Before Breakfast, the blog of author, reviewer and blogger, Julie Danielson.  Julie also has more artwork from this book in this post. If you want to see the right side of the illustration I note, follow this link to the publisher's blog.
Posted by Xena's Mom at 11:52 PM