Spring has been in full swing for many weeks now.  The word weeks instead of months (the spring equinox in 2018 was March 20th) is used because in northern Michigan the worst snow storm of the 2017-2018 winter season was April 13th to April 17th.  It's only been two months since there was two feet of snow on the ground in many places. 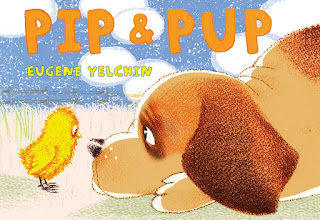 Mother Nature has been busy catching up; the wild buttercups and daisies are blooming, an abundance of birdsong begins each day and hordes of insects are hatching. In more domesticated scenes, farms, babies are being born.  Pip & Pup (Godwin Books, Henry Holt and Company, April 24, 2018) written and illustrated by Eugene Yelchin introduces readers to two newborns who aren't quite sure what to think about each other.

As this wordless delight begins an egg cracks open.  With a lot of effort, a tiny chick emerges and hardly believes the shell was its home.  Finding a perch on the barn roof, the fluffy bundle of yellow fashions binoculars with its feathered wings.  It spies a puppy, sleeping deeply.

The puppy is curled next to the large wheel of a tractor.  In order to get the dozing canine's attention, the chick decides to give its nose a quick peck.  It works splendidly with the pup barking at the now alarmed chick.  Scurrying in frantic circles among the other animals, the chick makes it safely back to the two-part shell.

All of sudden at thunderstorm blows over the farm.  Inside the shell the chick is safe using the smaller piece as a cap.  The pup is not as fortunate.  It is frightened and wet.  In a series of scenes the chick arrives, assesses the situation and offers the only form of comfort available.  It's perfect for the pup.

As the storm diminishes and blue sky and sunshine appear, the relationship between the two barnyard buddies gets stronger.  There are comical antics and laughter until disaster strikes.  Of course, the puppy has a solution even if it's not an exact match.


Beautifully conceived by Eugene Yelchin this tale of springtime camaraderie will connect with a variety of readers.  The idea of new life seeking out other new life certainly strikes a chord with readers finding themselves in completely new situations.  The introduction of the inclement weather provides a venue for kindness to build a bridge between the two.


Beginning with the dust jacket, the illustrations rendered in colored pencils, oil pastels, and digital painting are an open invitation to hug this book.  That chick and that puppy on the front of the jacket are adorable with a capital A.  Behind them to the left, on the back, the grass extends with a fence and barn buildings above it.  A bright sun is peeking from a cloud.  The text is varnished as are the puppy and chick on the flaps.

The book case is covered in yellow with flecks of orange, a charming duplication of downy baby chicken feathers.  On the opening and closing endpapers a delicate sky blue hints at the happy ending.  The first image, the cracking egg appears before the title page.  Opposite the title page are six comical pictures of the chick peeking and seeking from the broken shell.

Each wordless illustration is brimming with mood and emotion.  We feel curiosity, wonder, surprise, humor, kindness and the love of friendship.  The manner in which Eugene Yelchin places the elements on each page has us filling in the words in our minds.  He has chosen to make some parts of the picture more prominent (darker) than others, giving us a true sense of perspective which shifts from page to page providing pacing.  There is a special quality to his technique which draws us into each moment.

Most of his illustrations are single page with a fine red line framing them.  To celebrate the end of one thing and the beginning of another six vertical panels span two pages. You will laugh out loud at the final image at the close of the book.  It appears above the dedication and publication information.

One of my many, many favorite illustrations is actually two on opposite pages.  On the first one, on the left, the chick nearly fills the page.  It is standing on the peak of the barn roof. A few clouds are drifting by in the background.  The chick is lifting its wings to its eyes forming binoculars.  It is looking right at the reader.  On the next page within two circles is the sleeping puppy.  It's as if we are seeing this canine cutie through binoculars.  Around the two circles is a brushed green shade.


Without a doubt this book, Pip & Pup written and illustrated by Eugene Yelchin, will become a story time and bedtime favorite.  This is an excellent story without words singing its way into our hearts. When it's read aloud, I know you will hear sounds of laughter.  I know you will hear sighs.  I highly recommend this title for your personal and professional collections.

To learn more about Eugene Yelchin and his other work, please visit his website by following the link attached to his name.  He includes several interior images on his site.  Eugene Yelchin also maintains a Facebook page.  At the publisher's website you can view additional images including the two favorites I mentioned here.
Posted by Xena's Mom at 11:55 PM