Over the past few days a brisk, gusty wind has kept the bugs at bay and the temperatures more moderate.  If you look to the sky you are more than likely to be rewarded with the sight of a red-tailed hawk riding the aerial highway.  Even though science tells how they can soar, glide or fly, to watch them do this feels like we are privy to a miracle. 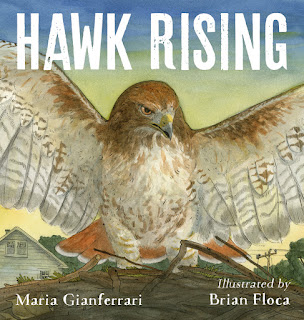 As other animals have done and fortunately for us, these beautiful birds of prey have adapted to living near and among humans.  Hawk Rising (Roaring Brook Press, June 5, 2018) written by Maria Gianferrari (Coyote Moon Roaring Brook Press, July 19, 2016) with illustrations by Brian Floca (Locomotive A Richard Jackson Book, Atheneum Book for Young Readers, September 3, 2013) is a majestic tribute in words and pictures to survival.  From the perspective of the bird and observant humans, we spend a day soaring, seeking and seeing.

He is not the only one stretching.  In a home nearby a girl and her younger sister awaken.  The oldest looks high for the hawk.  He sits high on a pole, hoping to catch some food for the chicks in the nest protected by Mother Hawk.  Rosy rays of sun paint the morning sky.

As the child leaves her home, carrying binoculars, Father Hawk notices the quick movements of a chipmunk.  He speedily leaves his perch, intent on capturing the meal.  The crafty chipmunk scurries under a nearby porch.  Up the red-tailed hawk climbs into the sky.

The girl watches the hawk.  The hawk watches from lofty heights.  A group of crows gather and chase him from their area.  He finds sanctuary in the tree tops and spots sparrows on the ground.  He plunges toward them but they scatter to safety.

The girl and her sister are still watching and waiting. The hawk does not deter from his task. With instinctive patience and sense of responsibility, he too watches and waits as the sun lowers in the sky. A squirrel dashes toward security but Father Hawk has a family to feed.  Night descends on two families until tomorrow.

By moving the narrative between Father Hawk and the girl, Maria Gianferrari allows us to be a part of both worlds. She shows us how to observe the splendor living among us.  She masterfully describes the movements of the hunter.

Short sentences with repetition align the two worlds, bird and human.  Alliteration and rhyming supply a welcoming cadence.  Word choices bring the time of day like a blanket to wrap around us.  We are there with Father Hawk.  We are there with the girl and her sister.  Here is one of the passages.

When you open the cover of an F & G (or look at the front image) and momentarily stop breathing, you know when you hold the finished book, it will be stunning. The red-tailed hawk, wings spread and ready to take flight will assuredly have readers wondering if Father Hawk will come to life.  The details in this scene, the fine lines, brush strokes and color palette, are found in each and every illustration rendered by Brian Floca.  The authenticity is fabulous!

To the left, on the back, we zoom in to see the hawk perched on top of a pole, ready to dive.  The lighting is paler, suggesting the sun is higher in the sky.  On the title page a small, loosely framed picture of the girl's house and the nearby nest depicts the breaking day.  With a page turn the publication information on the left and the first sentence on the right are set in a spectacular two-page picture of both hawk parents in the nest with the chicks.  They fill the entire visual.

Brian alters his image sizes to enhance the pacing, small pictures with uneven shapes, single page pictures and breathtaking two-page visuals.  He takes us close to the action (You don't know whether to cheer for the hawk or his prey.) and then gives us a panoramic outlook.  When you look at those landscape vistas, you can't help but feel as though you are flying side by side with Father Hawk.

One of my many favorite illustrations spans two pages.  Father Hawk has just missed getting the chipmunk.  He takes flight, rising higher and higher.  Brian has pictured him turning so we see the underside of his body, legs tucked back by his red tail.  Beneath him are neighborhood homes and the street.  On the right the girl stands in her backyard watching the hawk.  Her sister stands on the porch.  The hawk in the foreground takes up half of each page on either side of the gutter.  The homes are much smaller to his left and right.

Today (Sunday) as I worked in the yard and even later as the sun was setting, I kept looking to the sky hoping to see the elegance described so eloquently in Hawk Rising written by Maria Gianferrari with illustrations by Brian Floca.  The more we and our children look to those animals sharing this planet with us, the more our lives are enriched.  I highly recommend the placement of this title in your personal and professional collections.

To learn more about Maria Gianferrari and Brian Floca and their other work, please visit their respective websites by following the links attached to their names.  Both Maria and Brian have Facebook accounts.  They (Maria and Brian) also have Instagram accounts.  Brian Floca does have a blog and can be found on Twitter.  Two other places where Hawk Rising is being celebrated are Miss Marple's Musings and PictureBookBuilders.  Maria Gianferrari is interviewed at both spots.  At As The Eraser Burns Maria chats about her craft and all kinds of other things in a Q & A.  Maria is showcased at Reading for Research featuring ReFoReMo.  To view interior images please visit the publisher's website.

UPDATE:  Author, reviewer and blogger Julie Danielson features Brian and his art on Seven Impossible Things Before Breakfast.
Posted by Xena's Mom at 12:30 AM