In Gratitude For Grandfathers 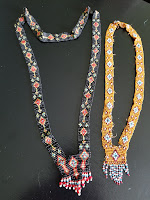 Yesterday, June 17, 2018, the third Sunday in June, was celebrated as Father's Day around the world.  It is a time to honor and remember those who have figured prominently in our lives.  Of my dad the memories are abundant. Not a day passes without something he said or did coming to mind.  Of my two grandfathers I have much less. These two necklaces, more than one hundred years old, and a rattle he made for my mom are all I have to remember my mother's father.  Mom believed he might have been Native American but he died from an accident when she was four. I have words from my dad's dad which have sustained me on more than one occasion.  Barely one when he was in the hospital, having suffered a heart attack, I was outside in the hall putting up a fuss because I could not see him. He said, "You can't keep Margie down."  He never came home. 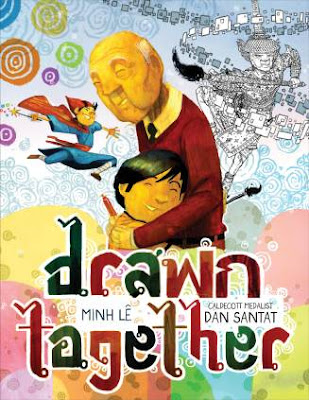 These men in our lives, whether they are living or have died, have and will influence us. In our youth we may feel as though they can't possibly understand us.  Sometimes it seems like we have no common ground. Drawn Together (Disney Hyperion, June 5, 2018) written by Minh Le (Let Me Finish! Disney Hyperion, June 7, 2016) with illustrations by Dan Santat (After The Fall (How Humpty Dumpty Got Back Up Again Roaring Brook Press, October 3, 2017) is a moving, truthful journey taken by a grandfather and his grandson.  Love always finds a way.

the elderly gentleman replies in his native language.  The meal is finished in silence.

After dinner the grandfather is watching one of his favorite television shows in a language the boy cannot understand.  Bored, he leaves the sofa going to his backpack.  He takes out a box of markers and begins to draw.  Leaning over his shoulder the grandfather is amazed at what he sees.

When he returns to the room he's carrying a sketch book, a bottle of ink and a brush.  What the grandfather does next amazes the boy.  They share a passion for art; one new and colorful and the other masterful in fine, detailed lines of black on white.  They are a magician and a warrior existing in a realm of their own making.

When the dragon of doubt threatens to rise up, the duo conquers it with courage.  They are content in the knowledge of their shared inventiveness and talent.  They know they've discovered a new language; a language without words.


We quickly realize the boy, while being polite, is not as happy as his grandfather about the visit.  With his first two sentences Minh Le allows us to understand the reason.  They do not speak the same language.

We sense the frustration of both until the boy begins to draw and the grandfather reveals his sketch book.  Minh's carefully chosen words at the boy's surprise send a surge of excitement into the story.  As his narration continues we know it's a discovery born of love for one another and love of making art.  The final sentence will leave you breathless, if not in tears.  Here is one of Minh's other partial sentences.

All the things we could never say come pouring out . . .


When first looking at the unfolded dust jacket ablaze in magnificent art, extending flap edge to flap edge, you know the child and the older man share more than affection.  You are filled with wonder and questions about the story waiting to be read.  The collage of techniques, the use of circles (no beginning and no end), and the combinations of color leave you astounded and brimming with joy.

The book case, a weathered and worn dark color, has the word SKETCH in chalk on the front.  The opening and closing endpapers represent the work of the boy and the work of the grandfather.  In the first a young wizard is leaping over a vibrant, bold landscape.  In the second a meticulous painting of an ornate fish swimming among the waves is presented in black on white.

Dan Santat does not waste any space in telling his visual interpretation of the story.  On the dedication (verso) and title pages the mother has stopped the car and is standing by the open driver's door.  Her son is slowly making his way to his grandfather's house. The first six panels are wordless but we are well aware of the situation.

Rendered in traditional mixed media and composited on the computer each illustration brings you deeper and deeper into the narrative. Using panels of varying sizes two, three or four to a page, Dan Santat fashions a pacing which is building tension that will burst forth with a dynamic two-page picture; their combined art with each other in a stance of action.  It's the beginning of one "oh my goodness" double-page image after another.  The details, the color and black and white elements, the title font, the Thai writing (by Dan Santat's mother) and the facial expressions and body postures will have you gasping.  Which the switch comes, you will be cheering out loud.

One of my many favorite illustrations is for the text quoted above.  Along the top of the two pages is an intricate and eloquent fish moving from right to left. Beneath it on the left is the grandfather dressed in traditional warrior clothing brandishing a paintbrush as if it's a spear. He is facing left.  On the right and facing right is the grandson, holding his wand and extending it to create his own special kind of magic.  He is colorful as are the circles around and below him.


No matter how many times you read Drawn Together written by Minh Le with illustrations by Dan Santat two words will continuously come to mind--timeless classic. We need books which tell us how to bridge generations.  Both have much to offer the other.  One has the wisdom of experience and the other has the zest of new discovery. The blend is a thing of beauty. I highly recommend this title for your personal and professional collections.

To learn more about Minh Le and Dan Santat and their other work, please visit their websites by following the links attached to their names.  Minh Le visits the blog of Scholastic's Ambassador of School Libraries, John Schumacher's Watch. Connect. Read.  You will enjoy the video created by Dan Santat about this title and the conversation between Minh and John.  Both Minh Le and Dan Santat talk about this title at Publishers Weekly and at The Horn Book with Roger Sutton.  Minh Le is interviewed at author Cynthia Leitich Smith's blog Cynsations by author Traci Sorell and on NPR, All Things Considered.