Bound By The Beat

It is a mild evening in October of 2003.  Crowds of people, expectations elevated, are streaming from the parking lots to The Palace of Auburn Hills in Auburn Hills, Michigan.  It is their first major concert tour since 1983.  It is (it was) going to be a night of nights, a lasting memory.  Two old friends, two best friends, are reunited. 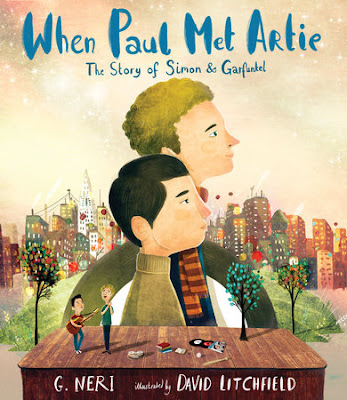 This friendship begins decades earlier in the Jewish suburbs of Queens.  When Paul Met Artie: The Story of Simon & Garfunkel (Candlewick Press, March 20, 2018) written by G. Neri with illustrations by David Litchfield chronicles the relationship of Paul Simon and Art Garfunkel from the time of their first meeting until 1966 with a highlight in 1981.  It is a tribute to this musical duo; a duo who sang of what collective souls were feeling then and still feel now.

Old Friends September 19, 1981
At dawn,
people hit the streets
all over New York City,
making their way
into the heart
of the weary metropolis---
Central Park.
Despite the gray skies
and morning drizzle,
the city comes to life---
horns blaring,
drivers shouting,
subway trains rumbling
underfoot---
a symphony
of noise.

This is the introductory paragraph to the piece on the neighborhood concert in Central Park where more than 500,000 people were in attendance.  People came to hear the well-loved voices and the words they sang.  It had been far too long a wait.

The year is now 1951. Two boys who have never met live a few blocks from each other in Kew Garden Hills. They are nothing alike in stature.  They are nothing alike in their dreams of a future.  One prefers singing.  He is called The Voice by the neighborhood mothers.  His name is Artie.  The other has dreams of becoming a star on the baseball diamond.  His brother calls him Slugger.  His name is Paul.

A school talent show when they are in the fourth grade changes Paul's dreams.  When he listens to Artie sing, he wonders and he hopes he can capture an audience's attention like Artie does.  Two more years pass before Paul and Artie, both with parts in Alice in Wonderland, truly connect.

Listening to the radio and hearing Elvis and other rock and roll hit singers like the Everly Brothers inspires the duo.  The gift of a guitar on his thirteenth birthday is exactly what Paul and Artie need to further fuel the fire burning in their souls for rock and roll.  Bravely they debut at a school dance.  They try doo-wop writing and recording The Girl for Me.  Music is firmly running in their veins.

At fifteen they are singing Hey Schoolgirl on American Bandstand.  Within three years, their dreams dwindle.  They go their separate ways, each pursuing a different career but neither can forget the music.  It's now the early sixties and folk songs speak of social injustice and civil rights issues.  While in Europe Paul writes He Was My Brother after learning of the death of a Freedom Rider.

A chance meeting reunites the two old friends, best friends, in 1963.  Another American tragedy prompts Paul to write a song which does not initially become a hit but fifteen months later, it's climbed to the top of the charts.  It's the beginning and a continuation of a historic musical partnership resulting in a Lifetime Achievement Award and the induction into the Rock and Roll Hall of Fame in 1990.


Each of the nineteen portions of this narrative is headed with a title song by Simon & Garfunkel.  Carefully chosen by G. Neri they are a reflection of the contents he discloses in his informative but poetic writing.  The meticulous research employed by G. Neri is evident in every single line.  His paragraphs have a cadence to them; each one linked to the other like verses in a song.  With each reading the words resonate in a richer and more meaningful manner.  Here are several passages from the beginning of The Only Living Boy in New York.

Paul has seen Artie
around the neighborhood,
wearing a red Phillies cap
or shaking boxes of Good & Plenty
in the candy store.
But until he sees Artie
standing nervously onstage
at the fourth-grade talent show,
Paul hasn't given him
a second thought.
But then again,
neither has anyone else
at school.

That is, until
Artie opens his mouth
and out pours
The Voice:
smooth,
hypnotic,
and sounding

just like the unforgettable
Nat King Cole himself.
Paul can't believe
what he's hearing.
He's spent plenty of time
down at the Roseland Ballroom,
listening to his dad,
a bass player and leader
of a big-time band,
so he knows talent
when he sees it.
This kid Artie is like
a human jukebox,
his voice casting a spell
over the entire school auditorium.
When he hits the final note,
it hangs in the air,
sucking the breath
out of everyone in attendance.
There is a moment of silence---
then the crowd of grade-schoolers
erupts with cheers.


Readers will find themselves pausing as soon as they see the front of the dust jacket.  Notice the intricate details in the cityscape, the trees, and the blowing leaves of the background.  It is a wonderful backdrop for the older Simon and Garfunkel staring into their future and with them as teenagers in the foreground.  David Litchfield includes elements from their earlier musical endeavors on the wooden stage.  Each one has significance.

To the left, on the back, a rustic red supplies a canvas for oval portraits of the boys facing each other.  Between them are the words:

How two best friends
from Queens
became teen rock
sensations,
lost it all,
and grew up
to become
Voices of their generation.

The book case shows Artie on the left and Paul on the right.  They are placed in scenes during one of their separations.  These full page illustrations are larger enhancements of interior images for the portion titled Homeward Bound. Artie is strolling down a sidewalk in the city at night with a few stars sparkling in streams of light and Paul is walking through a village in Europe as the sun shines behind him in hues of pink and yellow.  This book case, like all the illustrations, in a word is gorgeous.

The blue used in the title text on the dust jacket covers the opening and closing endpapers.  On the title page the recorder the boys used in Artie's basement is featured.  Rendered digitally each illustration looks like an exquisite painting.  The size and shapes of the pictures enhance the text superbly.

The single page for the concert in Central Park is an invitation for you to join the crowd.  As the boys are introduced a horizontal image, nearly half the height of the pages, stretching from page edge to page edge, gives readers an idea of their neighborhood and their place in it. David Litchfield extends his visuals across the gutter, many are on single pages, others have pictures within pictures, or panels like a graphic novel.  Great care is given to each element including the architecture and clothing for each of the time periods.

One of my many favorite illustrations is when Artie and Paul bravely play at their last dance in junior high.  Behind them at the top of the page is the cityscape in black with a few lights.  A crowd of classmates in muted tones of black, white, gray and brown surround the duo.  A spotlight shines on them as Artie sings and Paul joins him.  Paul's guitar is their only accompaniment.  The wonder of this evening is perfectly captured.  You can feel the excitement.


Paul Simon and Art Garfunkel were indeed the Voices of their generation but their music and their friendship has endured and will continue to endure.  This title, When Paul Met Artie: The Story of Simon & Garfunkel written by G. Neri with illustrations by David Litchfield, serves as an incentive for a new generation to raise your voice in song or to pursue another creative endeavor which serves the souls of many.  At the conclusion of the title is an afterword by the author, a discography, a bibliography and musical connections in chronological order for Simon's and Garfunkel's careers.  You will want to add this book to your personal and professional collections.

To learn more about G. Neri and David Litchfield and their other work, please visit their respective websites by following the links attached to their names.  David Litchfield also has another site linked here.  At the publisher's website you can view the beautiful interior image for Bookends.  They also have an article where G. Neri chats about the inspiration behind this book.  Other interior illustrations are shown at Penguin Random House.  Author Cynthia Leitich Smith interviews G. Neri on her blog, Cynsations.  Author, illustrator, teacher and speaker Elizabeth Dulemba interviews David Litchfield on her site.  At The Children's Book Review we get a peek inside David Litchfield's studio.  If you go to Twitter and search using When Paul Met Artie you can see even more artwork.


Please be sure to visit Kid Lit Frenzy hosted by Alyson Beecher to view the other titles selected this week by those participating in the 2018 Nonfiction Picture Book Challenge. 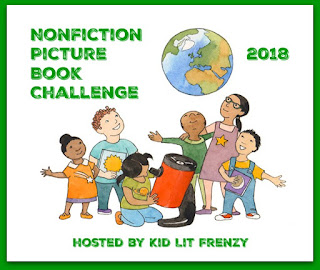