O Say Can You See

For weeks flags not previously displayed have appeared among those flying three hundred sixty-five days a year.  Buntings are hanging from porch railings and along roof lines.  Flower pots contain a mixture of geraniums, white petunias and blue pansies or lobelia.  There is hardly a home in the neighborhood not exhibiting some red, white and blue. 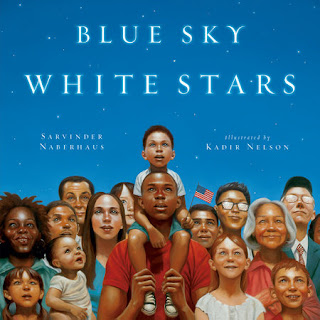 Today is the day the United States of America celebrates Independence Day.  On July 4, 1776 the Continental Congress officially adopted the Declaration of Independence.  Blue Sky White Stars (Dial Books For Young Readers, Penguin Young Readers Group, an imprint of Penguin Random House LLC, June 13, 2017) written by Sarvinder Naberhaus with illustrations by Kadir Nelson is a moving tribute to our flag, a symbol of the American people, their country and all it represents.

Like a choral reading, a back and forth repetition of physical, inspirational and historical aspects of the American flag are spoken by an unseen narrator (or narrators).  From the blue background with a star for each state a salute is given to the stripes of red and white.  A nod to the name bestowed upon our flag by Captain William Driver of Salem, Massachusetts in 1831 is found. (Did you know he hide his flag with twenty-four stars during the Civil War?)

For the next three pairs of lines words which sound the same with different spellings and different meanings sing of the value of flag, country and its people.  It has not always been an easy struggle nor will it be in the future.  But it unites us in a common purpose.

Those of us living here sometimes as participants and other times as spectators share dreams and goals, rejoicing in victories and appreciating the service of others.  We hold our heads high in the face of dreams and goals realized.  We continually reach higher and higher now and always.


The words of Sarvinder Naberhaus read like an anthem.  They need to be read aloud or raised in song.  If you take the text writing the lines as a continuous poem, it states indisputable features of our flag and our people but also opens the door to discussion and interpretation.  Therein is the beauty and value of this narrative.  Here is a single example of her word choices.  How would you interpret them?


Multiple award-winning Kadir Nelson has created a series of paintings for this book beginning with the matching dust jacket and book case which will have you gasping for breath at their beauty.  Readers will have a hard time taking their gaze from the front of the jacket and case to even open the book.  Look at those faces.  Look at their eyes and expressions.  Look at the reflection of the fireworks in the glasses of two of the spectators.  Moving to the left, the back, we become part of the crowd standing behind the darkened silhouette of the original people with the fireworks bursting above their heads.  The small flag in the child's hand is visible.  Notice the light in the boy's ears.

On the opening and closing endpapers the blue sky with white stars from the jacket and case is continued.  On the title page an older, more weathered version of several stripes on the flag is shown.  For every set of words Kadir Nelson interprets the text so brilliantly as a reader you can't help but be moved.

on the left against a blanket of early snow is a row of trees bathed in autumn red.  To the right are stripes from the flag.  For

on the left is a panoramic view of a baseball game.

Red, white and blue bunting hangs along the seats at the edge of the field.  The pitcher has just thrown the ball.  There is a brush stroke for every single person in attendance.  On the right a grandfather and his grandson sit on a porch, a radio sitting on a table in front of them.  Perhaps they are listening to the game.  We are so close to them we can see they are both munching from boxes of Cracker Jack treats.  The man, his glasses reflecting light and shadow, is wearing a World War II Veteran cap.  He is a decorated veteran.   They are looking straight at us.  This is my favorite painting in this title.


This book, Blue Sky White Stars, written by Sarvinder Naberhaus with illustrations by Kadir Nelson is truly a present from these talented people you can open again and again.  It is a stunning achievement.  You will want to read the words written by Sarvinder Naberhaus and Kadir Nelson in A Note From The Author and A Note From The Illustrator at the end of this title.